Tour promoter Live Nation has announced its first-ever drive-in concerts series in the U.S. for July, months after the live music industry has been on lockdown due to the coronavirus pandemic.

The entertainment company on Monday announced “Live from the Drive-In” — a set of nine shows to take place July 10-12 in Nashville, Tennessee; Maryland Heights, Missouri; and Noblesville, Indiana.

Concertgoers will be able to drive into the parking lots of the amphitheaters — a maximum of four people per car — and will have two empty parking lot spaces in between each vehicle so fans can watch and party from their designated individual tailgating zones. Attendees are encouraged to bring food, drinks and chairs, setting up around their cars to view the performers from the stage and also from the large LED screens.

All venue staff are required to wear masks, and Live Nation requests that attendees wear masks upon arrival, where there will be contact-less ticket scanning through their windows. Masks are not required once fans are in their designated tailgate areas, and Live Nation is not requiring that fans wear gloves.

“We’re really dialed in with partnerships with (the) local jurisdictions (and) we’ve been meeting with them for months, just talking about how we can provide a great, comfortable experience to fans with social distancing at the forefront in whatever phase they’re about to enter. Because of those relationships and that communication going back and forth, we’ve been successful in getting that green light,” See said in an interview with The Associated Press.

“It was really important to us not to just do one and be done. It wouldn’t be Live Nation. It wouldn’t be the concert industry leader. We wanted to make a bigger statement.”

Nelly, who is celebrating the 20th anniversary of his debut album “Country Grammar,” and Pink Floyd tribute band El Monstero are both from St. Louis and will perform at The Hollywood Casino Amphitheater. Pardi and rock band Yacht Rock Revue will headline at the Ruoff Music Center near Indianapolis. 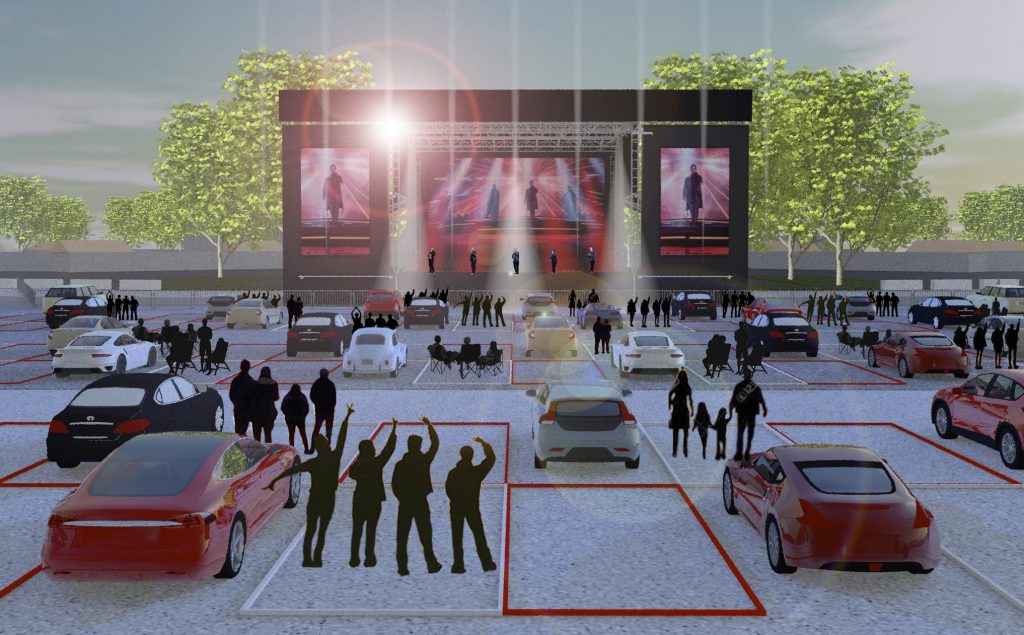 Tickets will go on sale for the general public on Friday. See said ticket prices will fluctuate by market, but they can be as low as $125, which is roughly $31 per person if the maximum number of four attendees per car attend.

“I’m very excited to do this because I wanted to make sure, if we were going to do anything like this, that they had the important stuff worked out,” Paisley said in an interview with the AP. “My goal would be not to spread this virus to one person. There should be no spread from this. That’s key. I just don’t think it’s worth doing shows if we’re putting people at risk.”

“The idea that we’re outdoors is a great thing,” Paisley added. “I just think it’s a fun way to watch a concert anyway. It’d be fun if there wasn’t a virus.”

For the Missouri show, See said they have a capacity to fit 1,000 cars while incorporating social distancing guidelines. Grills and BBQ pits are not permitted, but concertgoers can bring pre-cooked food and drinks, including alcohol. Live Nation encourages that groups assign a designated driver.

A menu of hot food items and nonalcoholic will be available for purchase, Live Nation said. People can place orders online and the items will be delivered to their designated tailgate zone.

Fans will only be able to leave their pods to access single restrooms, which See said will be cleaned regularly throughout the show. Attendees are encouraged to wear masks when leaving for restrooms.

“They don’t have to walk too far to be able to use the facility,” he said.

“The traditional drive in, I get it, you’re stuck in your car, and you’re going to get it through an FM transmitter. That’s not happening with these shows,” See said.

“We’re giving you what’s about the size of a double-car garage to where you’re going to be able to park your car, get out of your car, and have a great tailgating hang for you and your friends, and listen to music through proper professional PA and amazing audio and video display. It’s really a different aspect of drive-in and live. It’s highly experiential.”