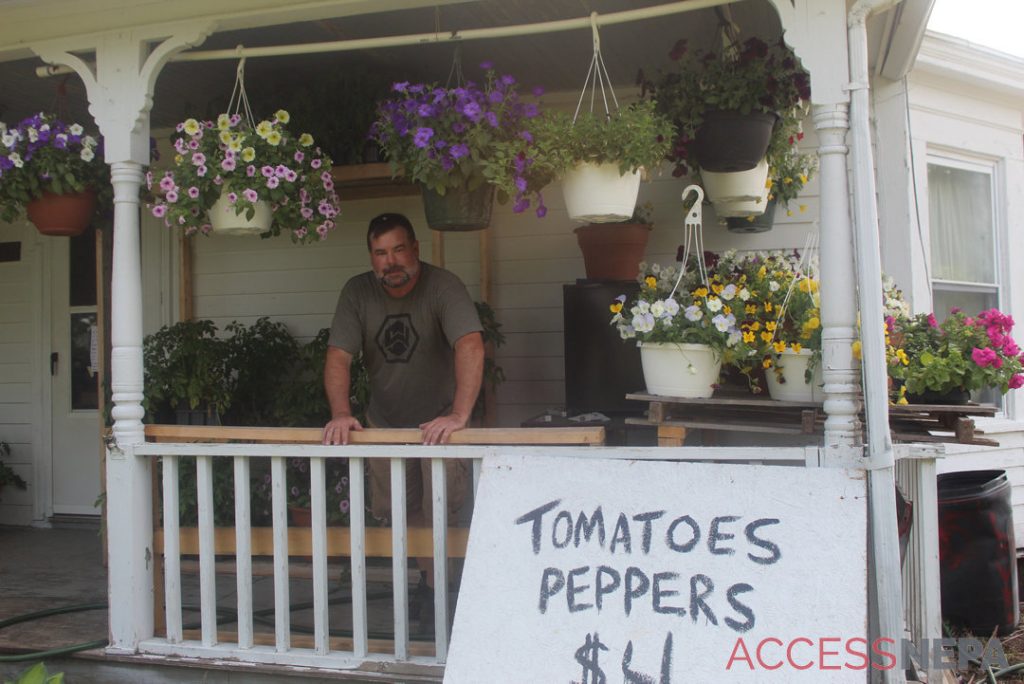 Everyone has hobbies that that they consider passions. For Jim Matalavy, 43, of Mehoopany, that passion is gardening.

He enjoys it so much that he wanted to share his passion with other people by selling some of his produce. He opened Nimble Nursery, adjacent to his home at 111 Willow Pond Lane in Mehoopany, on May 6.

For all of the gardening that he does now, it wasn’t always so.

Matalavy didn’t consider it one of his favorite activities as a child, in fact he would try to find other things to do when his father called him to help with the garden at his childhood home in Mehoopany.

“When I was a kid I hated it,” Matalavy said. “I would have to stop having fun with my friends to come and weed the garden or pick vegetables. I was forced to do it, and I don’t think anyone has had a bigger change of heart on something.”

Matalavy has had such a big change of heart on gardening that he has decided to make it a full-time business.

After graduating from the Pennsylvania College of Technology in Williamsport, Matalavy spent four years living in Denver, Colo. He said that the big city life wasn’t for him, and he always wanted to move back to the country and start some sort of agriculture business.

“You can’t really have a garden living in a big city,” Matalavy said. “I came back to Mehoopany and started gardening again as a hobby, basically just wanting to grow my own food. I then thought I can take this even further.”

The original plan was to open Nimble Nursery last year, however disaster stuck in March of 2020. A large, electrical fire burned down the barn on Matalavy’s property, pushing the plans back a year.

“It was just a windy night in March where wires got caught and we really couldn’t do anything to save the barn,” Matalavy said. “I couldn’t let myself sit down and do nothing anymore, so I got to work on this project.”

Nimble Nursery sells 15 varieties of peppers and 13 varieties of tomatoes. Customers have also come for watermelon, cucumber, eggplant, green beans and peas. All of the vegetable starter plants cost around $4.

“I’m a guy who also loves to cook and make my own homemade food,” Matalavy said.” A lot of these vegetables that I have are great for tomato sauce, ketchup, and meals like stuffed peppers. I also love making preserved foods like pickles. I hope people really enjoy all of these vegetables.”

Along with the fresh vegetables, Nimble Nursery also offers annual flowers in flats, hanging baskets, and patio pots. Perennials have been the biggest sellers so far. Matalavy hopes to expand on flower offerings next year.

“Taking care of all of the vegetables takes a long time and a lot of work for just one person,” Matalavy said. “But I know that people love to plant flowers during the summer. I got involved with flowers a little late, so I’m hoping next year to have some more variety.”

One of the reasons that Matalavy enjoys gardening so much, is because of the sense of pride that it gives him. He said that you feel accomplished after succeeding in a big project like a garden.

“You learn so much taking care of a big operation like this,” he said. “Personally, I think that the food also tastes better when you know that you grew it yourself.”

Mehoopany residents have taken notice of Nimble Nursery. Carol Henning recently bought flowers from the business and was very pleased with the quality.

“I know how hard Jim worked putting all of this together,” Henning said. “We always like to help out our neighbors here with their endeavors, and the flowers that I bought were great and easy to plant.”

Because it is his first year in business, Matalavy acknowledged, “it has started out a little bit slow.”

He added, “as word of mouth gets around, more people have started to come around. As we get deeper into the summer, I think more people will be interested.”

Nimble Nursery is located at 111 Willow Pond Lane, just off of Nimble Hill Road in Mehoopany. It is open Thursday through Sunday from 7 a.m. to 7 p.m., or Monday, Tuesday and Wednesday by appointment. Call 570-406-9138 for more information.