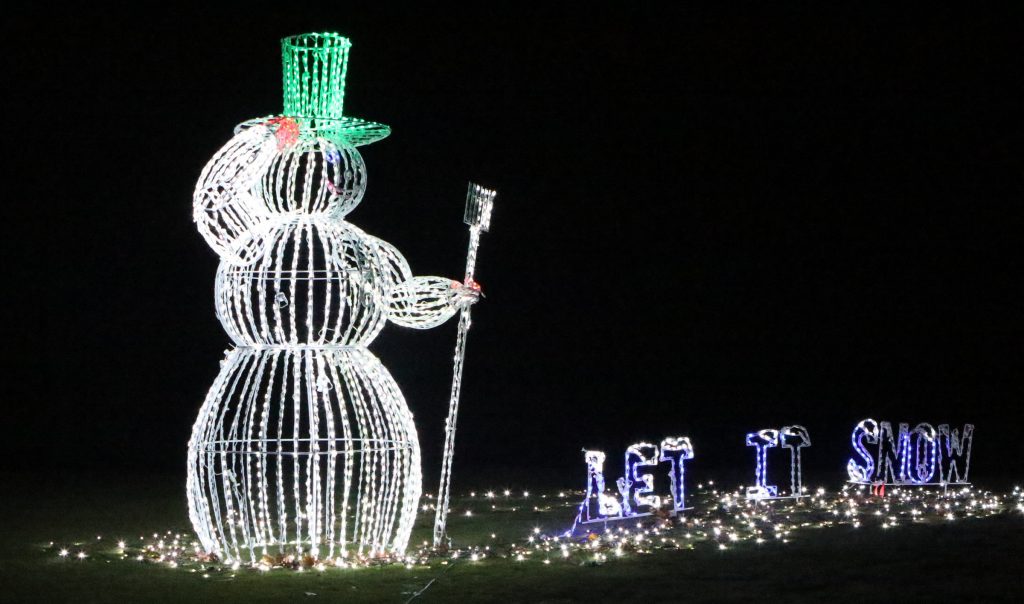 The Festival of Lights at Stonehedge Golf Course has returned for another holiday season with new surprises in store.

A half mile of lights has been added to the previously two-mile long display. In front of the Stonehedge building is a new homemade structure, and this year, visitors can also expect four new themes, plus one big surprise.

However, Karen Force, who co-owns Stonehedge with Bill Ruark, prefers for people to see what’s new for themselves rather than giving it away.

In just two years, the Festival of Lights has created a brand new holiday tradition for people in Tunkhannock and beyond.

“There’s nothing better,” said Force. “It’s probably the most satisfying thing I’ve ever done in my entire life.”

The business owners saw a similar drive-thru display outside of Charleston, S.C. and decided to replicate the concept in Tunkhannock as a way to keep their staff employed all winter, bring in revenue during the off-season and provide a fun holiday outing for families.

The process of planning this year’s display began immediately after the festival closed for 2018.

This consists of researching new themes and sending the ideas, usually in the form of clip art, in January or February to a company located in North Carolina.

By the fall, Stonehedge has its new “all-American made” displays. Setup begins on Oct. 1 with tunnels, which could be put up before the golf season ends. The remaining setup follows the final tournament of the season.

“It takes a small army,” Force said. In fact, installing the spectacle takes longer than the five weeks it remains on display.

“We make all of our own cords,” she said. “That’s over 11 miles of extension cords.”

Between the hundreds of displays are at least three million bulbs, she added.

Those who visited the festival before will recognize all pieces from the previous two years, such as candy, toys, monuments, animals, musical scenes and much more.

“We just added more, and we move everything every year,” Force said. “Nothing is set up in the same way or the same place. That way it keeps it interesting.”

At the end of the display, the pavilion offers additional opportunities for guests, including vendors and “family friendly” food and drinks. Each visitor receives a free s’mores coupon and could also purchase hot chocolate, coffee, and snacks such as popcorn and cotton candy, all of which cost $5 and under.

Santa Claus will also be in the pavilion each night for a free photo op, though guests must use their own cameras.

Since its inception, the festival has received an “unbelievably favorable response” from the public, according to Force.

“We really would like to thank our loyal employees for the extra hard work that they put into it,” she said. “Every year they have gotten better and they come up with ideas on their own.”

Going to the festival each year has become a tradition for Gina Suydam and her family.

“When we’re feeling in the Christmas spirit, we all go up and take the drive through,” Suydam said. “We love it because it’s a nice way to spend time with the kids who are getting to the age where maybe they don’t believe in Santa anymore, but they still enjoy the Christmas spirit and the holidays and can certainly enjoy the magic of all the lights.”

“Even if you don’t have kids, it’s something enjoyable to everyone for the holidays,” she added.

As president of the Wyoming County Chamber of Commerce, Suydam has also seen the Festival of Lights benefit other local businesses by drawing more people into the area. Last year, she remembers the festival being especially busy during the weekend of Christmas in Our Hometown.

“I think people were coming out to Christmas in Our Hometown with the intention that they would do both in the same evening,” she said. “It was fun both for the retailers and Stonehedge to have the increase in volume.”

The goal of the festival is to give families a “happy, joyous experience,” Force said.

Stonehedge Golf Course is located at 55 Stonehedge Drive in Tunkhannock. The festival is open Sunday through Thursday from 5 to 9 p.m. ($25 per car) and Friday through Saturday from 5 to 10 p.m. ($30 per car).

This year, Force wants to encourage more people to visit on weekdays to avoid traffic jams.

“We’ve made some paths up there to hopefully get them off the road and we have an ambulance here on the weekends in case anyone on our road has an emergency,” she noted.