Kelly’s Pub & Eatery may be known for its signature chicken wings, but its owners have done anything but wing it over the past 30 years.

The quartet of sisters behind the South Scranton staple – Karen Snyder, Patricia “Trish” Laboranti, Kelly Hamm and Joni Boino – each cut her teeth in the service industry before opening the restaurant at 1802 Cedar Ave. on July 26, 1990.

Through the years, hard work, adaptability and a love for their customers and staff created the recipe for Kelly’s success.

“I can’t believe it’s been 30 years,” Boino said with a laugh. “It seems like it’s gone by in a blink, but it’s been so much fun. Too many great memories to count.”

The sisters come from a big family with a strong work ethic. Parents William “Buddy” Cosgrove and the late Joan Cosgrove raised seven girls and two boys. Their father owned a plumbing business but also a two-story building on Cedar Avenue that he rented to various businesses for years. Six of the Cosgrove daughters all had worked in the food service industry when their dad suggested they open their own restaurant in the space. The sisters were open to it, and thanks to their backgrounds, they each had their own preference for what they wanted their job to be.

When trying to come up with a name, they knew it had to be something short and catchy that also would reflect their Irish heritage. Their Irish father had been on the St. Patrick’s Parade committee for as long as they could remember.

They decided their sister’s name, Kelly, personified their Celtic heritage but also was easy to spell, say and remember. Kelly’s Pub & Eatery was born.

Thanks to a strong work ethic instilled in them by their parents and an attitude of working together for the greater good, the sisters built up Kelly’s into a city institution. Though two of their sisters left to pursue other interests over the years, the others continued on, challenging themselves to improve each aspect of the business. They made sure Kelly’s stayed an accepting and comfortable place to relax and share a great meal with friends and family.

“We learned a lot over time,” Hamm said.

The restaurant is known for casual American fare, including pizza, salads, fried appetizers, burgers and sandwiches. Laboranti’s homemade soups and gravies remain popular, too. Over the years, the sisters have updated the menu to reflect trends and what customers like to eat, including wraps and more fresh salads.

The biggest menu items by far are Kelly’s chicken wings. The sisters started the restaurant just when the wing craze was taking off, Snyder said. Once they nailed down signature sauce recipes and crispy wings, the combination couldn’t be beat. Through word of mouth, Kelly’s with its Wednesday wing nights became one of the top places to dine on the finger food in Scranton.
Over the years, they’ve experimented with flavors and added more sauces to the menu. They’ve also won dozens of awards, honors and bragging rights at competitions and in reader polls throughout the region.

In fact, some of the sisters’ best memories come from those competitions, Hamm said, including the annual wing contest at Montage Mountain Resorts, Scranton. The women would get there early in the morning to prep and cook the wings, and their whole family – including their parents, aunts, uncles, kids and more – would come to help out or just cheer them on.

“Those were some of the most fun times we ever had,” Hamm said. “I remember those days being long but exciting and worth it. We were all happy to be there together.”

The restaurant has always been a family affair. Right up until she died a few years ago, their mom was known to help out around the restaurant, taking care of the banking and doing the restaurant’s books by hand before there were computers, Laboranti said. Their father and brothers helped with plumbing and other handy work, not to mention the sisters’ own children plus nieces, nephews and cousins who all worked there as teenagers and during college.

“It’s been so much fun to watch them grow up and then see them go off and excel,” Laboranti said. “They’re always so many great memories from everyone being here and working together, though.” 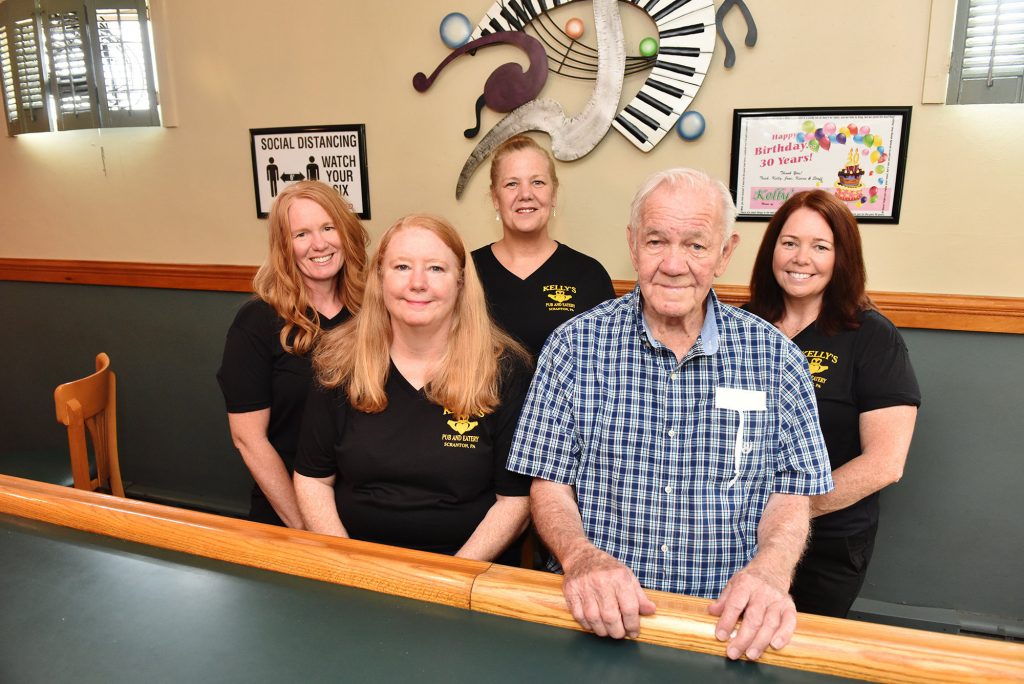 The restaurant also is known for its friendly, welcoming atmosphere. Though it serves as a local watering hole for after-work drinks, it’s also a great place for families. It soon became a popular spot for parents to take their children after games and tournaments. The sisters added a kids menu to better suit the pint-sized customers, and many children tried their first chicken wings at Kelly’s. Over the years, dozens of families have come into the city restaurant to celebrate a well-played game or simply to spend a night out together.

“It’s a very laid-back and comfortable atmosphere,” Snyder said. “It doesn’t feel like your kids wouldn’t find something they like to eat or that it would be too many adults. We’re very family-oriented (ourselves), always bringing our kids into work and having them be with us. I think the restaurant just followed suit.”

To sustain a local business for 30 years is no small feat, and Snyder partially credits Kelly’s success to the support system among the sisters. No matter what was going on, whether personally or professionally, the sisters had someone to lean on during tough times. It helped when they started their own families, like when one of the sisters would go on maternity leave or needed to bring the kids to the restaurant, Hamm said. They also rallied around Boino as she fought cancer. They each could focus on their own lives since their sisters had their backs.

“Don’t get me wrong, we have our moments,” Hamm said, laughing. “At the end of the day, though, we’re here for each other and love each other.”

When it comes to running the business, the sisters are a well-oiled machine at this point. Laboranti and Boino deal with more of the back-of-house duties. Both cook and Boino does the orders while Laboranti oversees the kitchen and prep work. Hamm and Snyder are in charge of the front-of-house operations, although Hamm said she could switch into a back-of-house position given the situation. All of the sisters easily adapt.

“The burden never falls on one person,” Snyder said. “We’re there to help each other, and we know enough about it that we can say, ‘You take care of what you need to take care of. I’ll handle it,’ to each other, and that’s nice to know. We take care of each other.”
Through the past three decades, the customers became like family, too. Their customers invite the sisters to their celebrations like birthdays, graduations and other milestones and vice versa.

“We always say they’re our family,” Snyder said. “We always wanted to be like we were hosting them in our living room, making them feel welcome and feel at home.”

Then there’s the dedicated staff. Snyder said the family has been very fortunate to have great people who represent them and their values and who treat customers like family. Without them, she said, Kelly’s wouldn’t have the quality customer service that brings people back time and again. The people working behind the scenes provide that same level of service and care, even if customers don’t get to see them as much.

“Without these people and our great customers, there’s no way we would have survived 30 years,” Snyder said.
Kelly’s serves its community, too, hosting fundraisers for local causes such as Matthew’s Mission. They’ve donated to local churches, benefits, arts and culture programs and more over the years, and one “can always expect a basket from Kelly’s” to be raffled off, Snyder said.

Like most small businesses, COVID-19 has thrown the family restaurant for a loop. Hamm said they’d never experienced anything like it before, and there have been times where the future seemed uncertain. Though, their customers have been nothing short of amazing, Hamm said.

“They’ve always been loyal, but they’ve really shown us so much love and kindness during this whole time,” she said. “I don’t know what we would do without them.

Kelly’s remained open for takeout throughout the entire stay-at-home order, and the dining room is open now. While everyone in the service industry is taking things day-by-day, the sisters move and adapt whenever they have to. Thankfully, just like the past 30 years, they’ll always have family to lean on – whether it’s their blood relatives or the chosen kind.