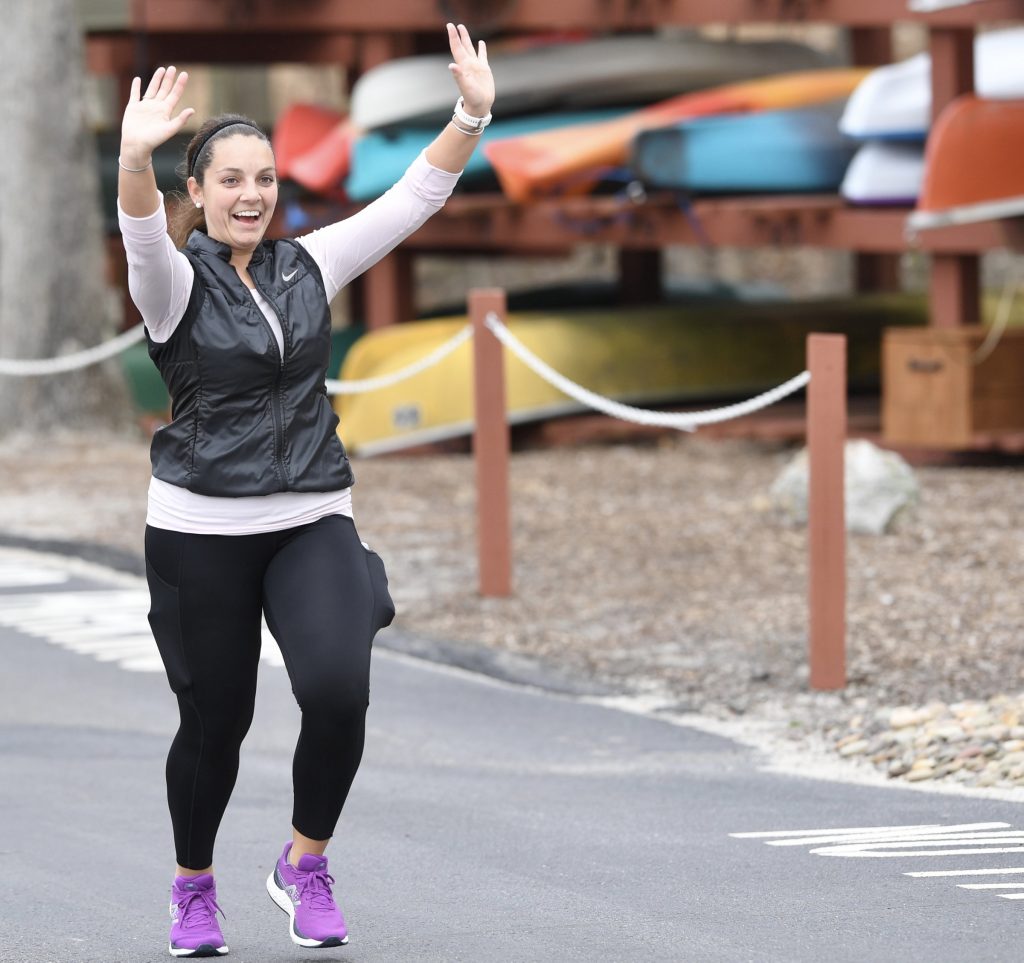 HAZLE TWP. — It was a chilly and damp Saturday morning, a day many people would rather roll over and stay in bed.

But seven women from the Eagle Rock development near Hazleton made a commitment to the residents in their community, their families and themselves.

They had a race to run.

But this would not be a typical race where the contestants line up shoulder to shoulder at the starting line. It also would not include the traditional high-fives and hugs at the finish line.

The most rewarding portion of sport, however, was not absent and that was camaraderie.

All of the local athletes were entered into the Scranton half-marathon that was scheduled last month but canceled due to the coronavirus pandemic.

They were disappointed and understood the reasoning, as many changes in lifestyle have occurred during the crisis. Yet, one of the things that was not taken away with the “stay at home order” was the encouragement of outdoor recreational activities

At 9 a.m. last Saturday, they were found in the Pan Am Pizza parking lot, maintaining social distance parameters six to 10 feet apart, stretching and preparing for a half-marathon designed by two of their husbands. 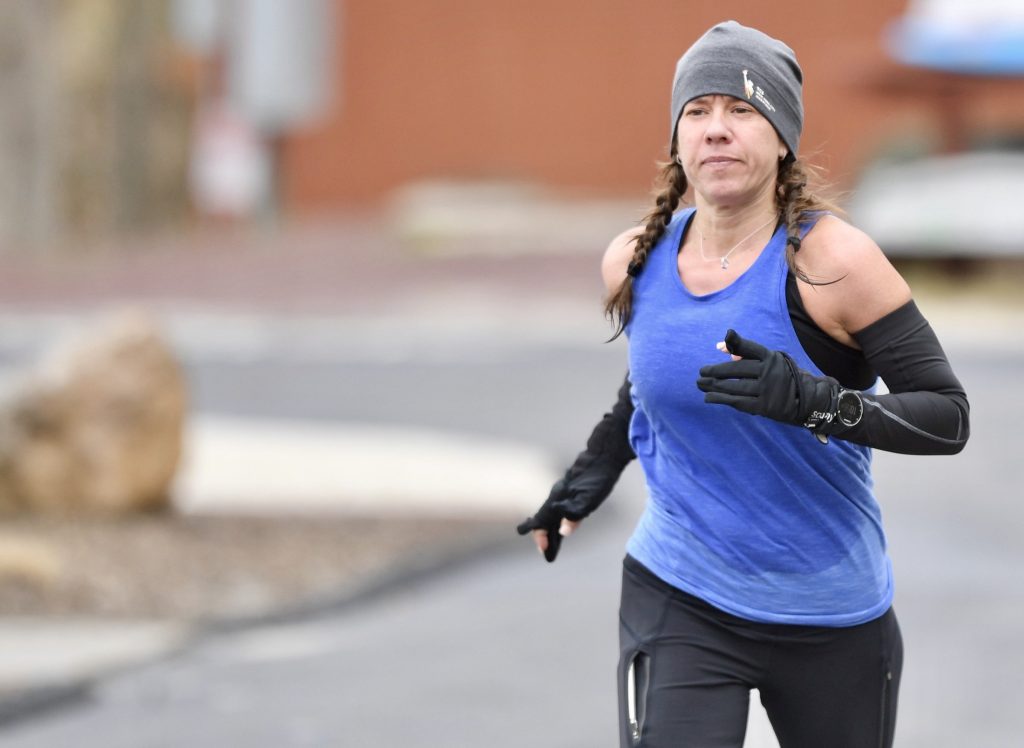 BOB GAETANO / CONTRIBUTING PHOTOGRAPHER
Pamela Burke crosses the finish line at Lake Susquehanna in the Eagle Rock development near Hazleton after competing in a half-marathon on Saturday. Competitors were mindful of social distancing throughout the race.

Tom Burke realized how hard his wife Pamela had worked and the sacrifices that she had made. He mentioned that he wished there was something they could do while talking with Jeff Turse, whose wife Angela Genaro-Turse, also was a competitor.

“We watched them bust their butts for the past several months preparing for this race,” Turse said. “We decided to sponsor our own little race for them.”

The women’s training regimen required a lot of determination and commitment.

“Most of us run around 5 a.m. and 5:30 a.m. during the week and on weekends we are all able to work together,” Pamela Burke said.

These ladies are not new to running circles, especially Burke, who has captured many state-wide accolades.

“We won’t be running for any personal bests today, but purely for the enjoyment,” offered Burke, who took off first from the starting line.

Perhaps one of the most rewarding parts of the race was the community support shown by their neighbors. Several residents gathered at the finish line at Lake Susquehanna and others stood in their yards and porches and cheered as the runners passed.

“I couldn’t help but smile when I heard the people yelling out their windows and ringing cowbells when we jogged by,” Kristin Fulton-Fritz said. “In a time that our world has been turned upside down, it reminded me that we are all in this together.” 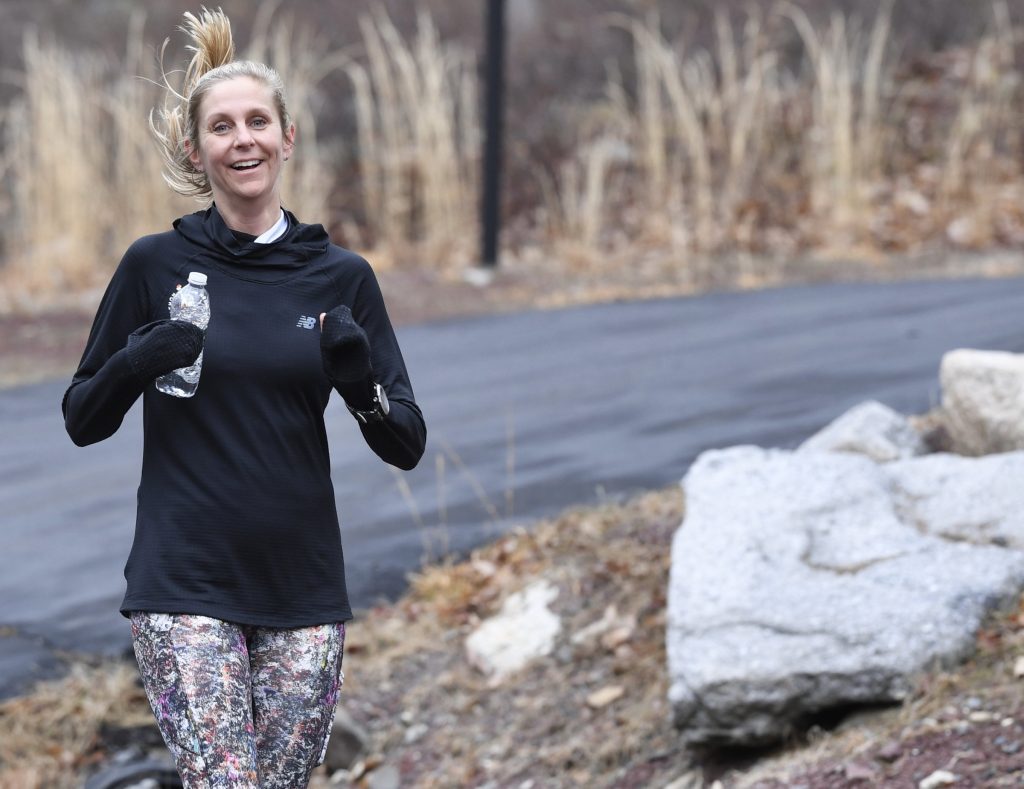 BOB GAETANO / CONTRIBUTING PHOTOGRAPHER
Kristin Fulton-Fritz cruises downhill during the final mile of a half-marathon at the Eagle Rock development near Hazleton on Saturday. For competitors, the race replaced the Scranton half-marathon, which was canceled last month because of the coronavirus pandemic.

Fritz, who also was celebrating her birthday, was wearing a headband that said, “If you can read this, you are too close.”

The cancellation of the Scranton event had a bigger impact on runner Alyssa Dougherty.

“I was pretty bummed when they made the call about Scranton because it’s my favorite half-marathon in our area and they also have a 5K on the Saturday before that my dad and I were planning on running together,” Dougherty said.

It may not have been as reputable as the Scranton half-marathon, but surely the Eagle Rock run will be more memorable. The runners were even presented with medals and had their pictures taken at the finish line as friends cheered.

All the women half-marathoners — also including Grace DePompo, Liz Tolan and Shari Frank — said they plan to continue with the running club and prepare to compete as soon as the coronavirus pandemic subsides and their lives become more normal.

One of the races the group will be preparing for is a 5 kilometer run/walk, 10K run and kids fun run on Saturday, Aug. 15 at Eagle Rock. Proceeeds will benefit Arianna’s CDH (Congenital Diaphragmatic Hernia) Foundation, a 100% non-profit organization.