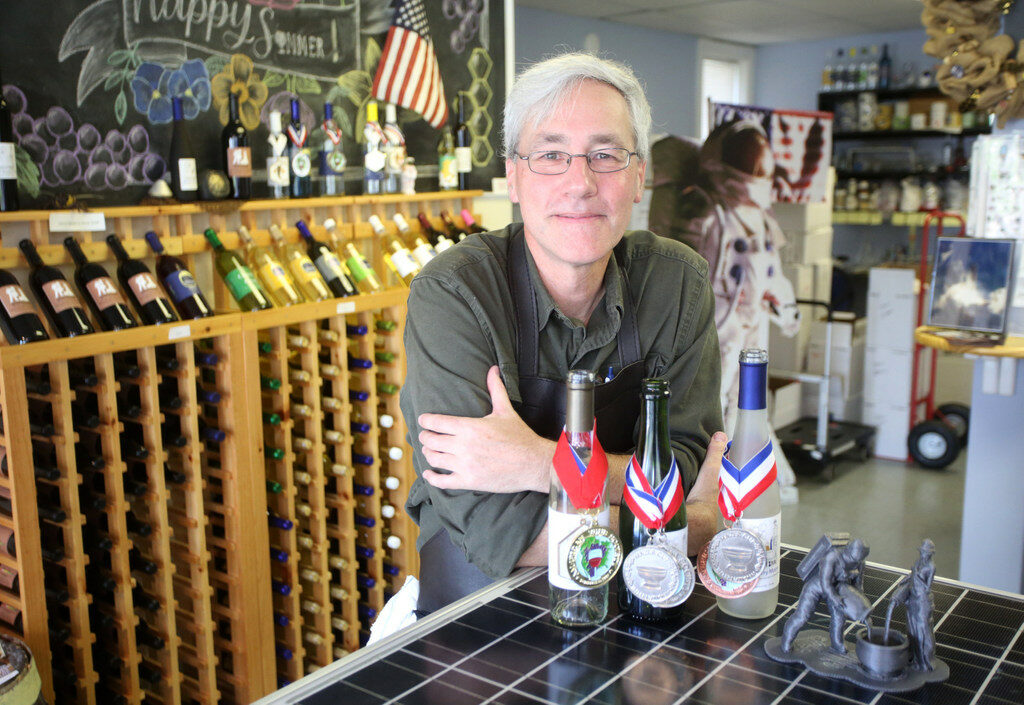 Dunmore meadery and cidery blends past with present

Some things get better with age.

Dunmore resident Dan Schreffler makes a living off this notion by celebrating the timeless while applying new technology that keeps traditions alive in innovative ways.

As the owner and main brewer at Space Time Mead & Cider Works, his Bucktown “urban micro-winery,” Schreffler blends the past with present as he revives mead, the “oldest beverage on the planet,” using 100% Pennsylvania wind energy.

A self-described “wine guy,” the 54-year-old dove into home-brewing 12 years ago as a side hobby to his longtime career in IT at MetLife, where he worked for 26 years. When he successfully battled rectal cancer eight years ago, Schreffler emerged from the disease with a new outlook on life.

After spending years developing drinks at home that he and his friends couldn’t find in stores or bars, Schreffler decided to retire early and devote his days to moving up from amateur status to brewing professionally. He spent a year apprenticing with Honey Hole Winery in Drums, where he was allowed to experiment and learn before committing to his own commercial business.

Applying budgeting and planning skills he learned by managing major projects at his former job, Schreffler then found retail space on South Blakely Street and made a modest investment into establishing Space Time. The name and astronaut-meets-maiden logo are derived from the ambition the winery holds in its mission.

“I come from a craft beer background, and I like that community. The name needed to be unique and (reflect) what we do,” Schreffler said. “I’m like a time traveler bringing this beverage back. The image shows the duality of traditions — grounded in the past and looking to be innovative. The name gives such a palette to have fun with.”

He pointed out that when customers come to his shop, they often look to buy a special bottle for big occasions, such as a proposal, anniversary or celebration.

“Someone is coming in to buy a specific product for a special time,” Schreffler said. “I want to fulfill that space and time moment for that need.” 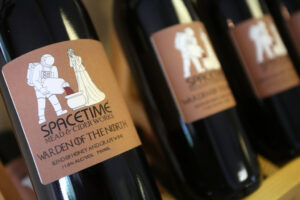 Jake Danna Stevens / Staff Photographer
Space Time Mead & Cider Works has about 40 varietals on its shelves and in its tanks.

Mead is just as complex and sophisticated as wine, Schreffler noted, but it stands apart thanks to honey, its main fermentation component. To create the close to 40 varietals found in his Dunmore tanks and showroom, he incorporates locally sourced ingredients, such as blueberries from Lake Ariel, brandy from Nanticoke, honey from local apiaries, and cider from Ritter’s and other mills.

Since opening to the public in June 2018, Space Time has also made a name for itself in industry circles, winning a number of commercial mead awards from renowned delegations, such as the Mazer Cup, the American Wine Society and Orpheus MeadFest.

“We’re making world-class stuff right here in Dunmore,” Schreffler said. “And we’re not in a hurry to sell a lot. I just want everyone who comes in here to be blown away. And I have seen people blown away by the quality and that (the products) are mostly locally sourced.”

Local restaurants and bars, like Cooper’s Seafood House in Scranton, Gold Crown Pizza in Dunmore and Sabatini’s in Exeter, have supported the business since the beginning, Schreffler noted, and he frequents local farmers markets, too.

Space Time’s fans even extend as far as NASA’s Langley Research Center in Virginia, which sends Schreffler care packages that pay homage to his like-minded imagery.

But beyond recognition, Schreffler feels passionately about being an environmentally and community-minded business owner. As a former chair of the local Sierra Club and volunteer for the state chapter, his philosophy of practicing what he preaches extends to the responsible carbon footprint, recycling practices and methodologies found at Space Time.

“Everything we use, every drop of water, every kilowatt of electricity, is looked at,” he said. “I want to be a business that has a positive impact.”

He will further this goal with his newly introduced Bad Wolfe brew, a small, limited batch from which proceeds will be donated to area families dealing with cancer. And other efforts support local causes, such as participation in an upcoming benefit for Lacawac Sanctuary and a wine label art competition he created in collaboration with AFA Gallery and the NEPA Horror Film Festival.

“I love NEPA. It’s such a great area,” Schreffler said.

As he continues the process of brewing his gluten-free creations — meads and ciders can take anywhere from four to eight months to mature — Schreffler continues to look ahead with happiness and a clean bill of health.

“It’s work, no doubt,” Schreffler said, with his work weeks typically clocking in around 50 hours. But it’s time well spent, he insisted.

“I love every second of it. My best days are in this place,” he said. “It’s a great time to be alive.”