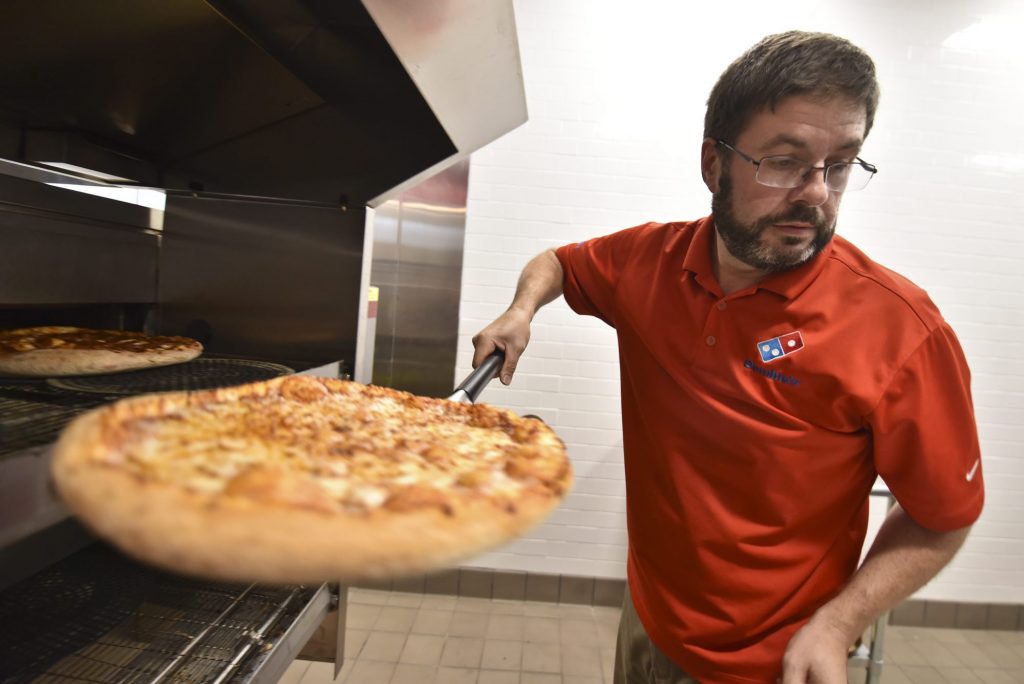 Northeast Pennsylvania has a growing appetite for Domino’s, at least if you ask entrepreneur Seth Gollhardt.

In February, Gollhardt bought the former J.J. Bridjes, a popular restaurant in South Abington Twp. which closed last year, for $737,500.

He plans to relocate his current Abingtons restaurant, which is a few hundred yards away, into part of J.J.’s and lease out the rest of the building.

Today he’s opening his 14th restaurant in Wyoming, in the Midway Shopping Center, and has another planned for Mountain Top, in Fairview Twp., to open before the year ends.

Next year, he’ll open his 16th store in South Scranton, he said.

Gollhardt described a two-fold strategy for success, one in which he puts restaurants in underserved areas, and also adds stores in high density areas to shorten delivery times.

He did it in Wilkes-Barre. In a similar way, the Wyoming store closes the gap between those in Pittston and Kingston, and the South Scranton store will deliver hot pizza and appetizers faster for South Siders who would typically order from the Mulberry Street store.

He also has all the tech that makes pickup or delivery simple.

“Almost three-quarters of our orders are placed digitally, and more and more it’s on mobile devices,” he said.

Domino’s is an odd bird in a region saturated with independent pizzerias. Many of those family businesses enjoy fiercely loyal followers and chain restaurants struggle to compete.

Papa John’s closed its only two stores in the region in 2010.

Pizza Hut left prime commercial areas over the last five years or so and only has a handful of restaurants remaining. Uno Pizzeria and Grill closed its restaurant in Wilkes-Barre Twp. a decade ago and the one in Dickson City on Oct. 31.

“We do have some really great local pizza places, and I think consumers overall want to buy local, support local,” said Brenda Lidy, associate professor of hospitality and business management at Keystone College. “However, there’s still a market out there.”

The Domino’s brand can flourish because it embraced technology and streamlined the ordering process, she said. Its prices are typically much lower than independent pizza shops, too.

Gollhardt bought his first Domino’s restaurant in Chicago in 1986. He was 21 years old, and started as a delivery driver only two years before that.

“It’s all because I didn’t have a pen,” he said, explaining how he needed a summer job and applied first at a Baskin Robbins. “The manager seemed very upset that I didn’t bring my own pen to fill out the application … the rest is history.”