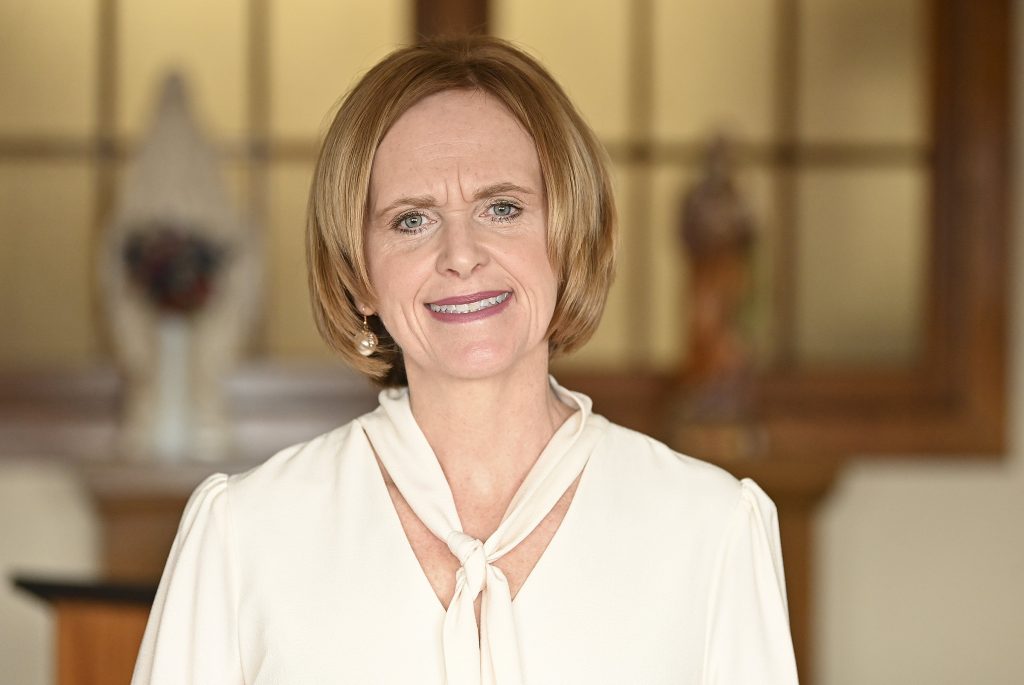 When the Diocese of Scranton wanted to add a counseling position to help its elementary students in Lackawanna County, it turned to Liz Devine.

The Scranton counselor and licensed attorney has spent the last three-and-a-half years guiding students on everything from self-esteem issues to developing healthy relationships.

“It’s given me insight into how the schools work and the kind of environments that the kids in the schools are dealing with,” Devine said. “There’s so much that these kids are faced with (today). … It’s a different world.”

After moving to New Jersey, Devine decided to go to law school to focus on educational law, and she earned her juris doctorate from Widener University Delaware Law School. She followed that with a jobs at the Department of Justice and the New Jersey attorney general’s office.

After having two daughters 14 months apart, Devine and her husband, Dr. Sean Devine, decided to move back to Northeast Pennsylvania. She raised her family — which now includes three girls, Scranton Preparatory School students Molly and Clare and Our Lady of Peace School student Grace — and worked in law for a time before the diocese tapped her for its new gig serving its Lackawanna elementary students.

“Our Catholic schools are just a microcosm of the bigger world,” Devine said, adding that diocesan school students face many of the same issues their peers elsewhere do. “It was just fortunate that it all came together, and it’s ideal.”

Devine spends one day every week at each of the schools. She gives lessons about subjects such as kindness, empathy and friendship, but also helps students one-on-one when they might need more serious guidance. A program called Lunch Bunch gives students a chance to get together in a small group over lunch to learn more about issues such as coping skills.

“It’s supposed to be fun. … It’s a nice way for them to learn in a relaxed environment,” Devine said.

And while she and the teachers can offer lessons about serious topics to the students, Devine also sees the value in bringing in guest speakers to shine a different light on issues such as mental health and wellness, perseverance, goal-setting and safety. She has coordinated visits from such groups as the Lou Ruspi Jr. Foundation and the Lackawanna County district attorney’s office as well as from wounded combat veteran Earl Granville and Pennsylvania State Police Trooper Alex Douglass, who was seriously wounded in Eric Frein’s 2014 sniper attack.

Devine also hoped to have students fulfill one of the themes of Lent, almsgiving, by helping create “birthday bags” for local food pantries that include materials like cake mix so people in need don’t have to go without on a birthday.

“People who go to food pantries, what do they do when they have a special occasion?” Devine said. “(We) try to get the kids to realize something as simple as a birthday cake might not happen for some people.”

Devine’s work also involves helping identify kids who might need academic or behavioral assistance, serving on the diocese’s crisis response team and offering educational opportunities for parents by bringing in speakers from the community on such topics as what parents need to know about social media. In the fall, she organized a session on the dangers of vaping, bringing in a pulmonary critical care doctor and police to talk to the group. Devine also makes sure to keep parents apprised of other hot topics, such as by issuing a letter to apprise them about the content of controversial Netflix series “13 Reasons Why,” which depicted teen suicide.

Being a mother has absolutely helped her in her job, Devine said.

Devine loves the chance to interact with the students that her job affords, especially with the younger ones, in whom she sees the greatest opportunity to make a difference in the world by ingraining the “essentials” in them early on.

“I hope to leave them with the idea that they can be kind, that they have the ability to be kind, to teach them to be kind and take care of their mental health,” she said. “You can’t focus on math and reading skills if you have something else (going on) in your head.”

Devine sees herself and her coworkers as being partners with the parents, and helping them is critical, she said, because “the world is hard enough.”

“I just think in the greater scheme of things, we’re doing what’s necessary to educate the parents, the students and the families,” she said.