Over 700 jack-o’-lanterns will glow at Creekside Gardens this weekend ahead of Halloween.

“This will be our largest display we’ve ever created,” said Sherri Kukuchka, who owns Creekside Gardens in Tunkhannock with her husband Kevin. “There will be over 700 carved pumpkins throughout the garden center and throughout the greenhouse, just all over the grounds.”

Starting this Thursday, Oct. 24, The Pumpkin House at Creekside Gardens opens each night from 5 to 9 p.m. until Sunday, Oct. 27.

In addition to the pumpkin displays, The Pumpkin House also offers an “I Spy” scavenger hunt, a campfire with marshmallow roasting, music, vendors and food trucks.

The Kukuchkas also encourage guests of all ages to arrive in their Halloween costumes.

This Halloween tradition began around eight years ago. Seeing the success of their annual Butterfly House that began in 2010, the Kukuchkas aimed to create a similar event for the fall that could attract families.

While planning the first Pumpkin House, they questioned if 100 pumpkins would be doable.

“It’s grown a lot over the years and we always have more carved than what we promise,” she said. “It’s a pretty crazy endeavor carving that many pumpkins, so we have a lot of friends and family who come out of the woodwork every year to help us.”

In the weeks leading up to opening night, designs get hand-drawn onto the pumpkins, which are then staged throughout Creekside Gardens to plan the displays.

“There’s a big master plan to be able to pull it all together. We have a short time window of course to get all the gutting and carving done because they don’t last that long,” she said.

To clear out the pumpkins efficiently, volunteers cut holes in the bottoms and use a drill bit made for gutting pumpkins.

“Then we have a carving crew who carves right behind them,” she explained. 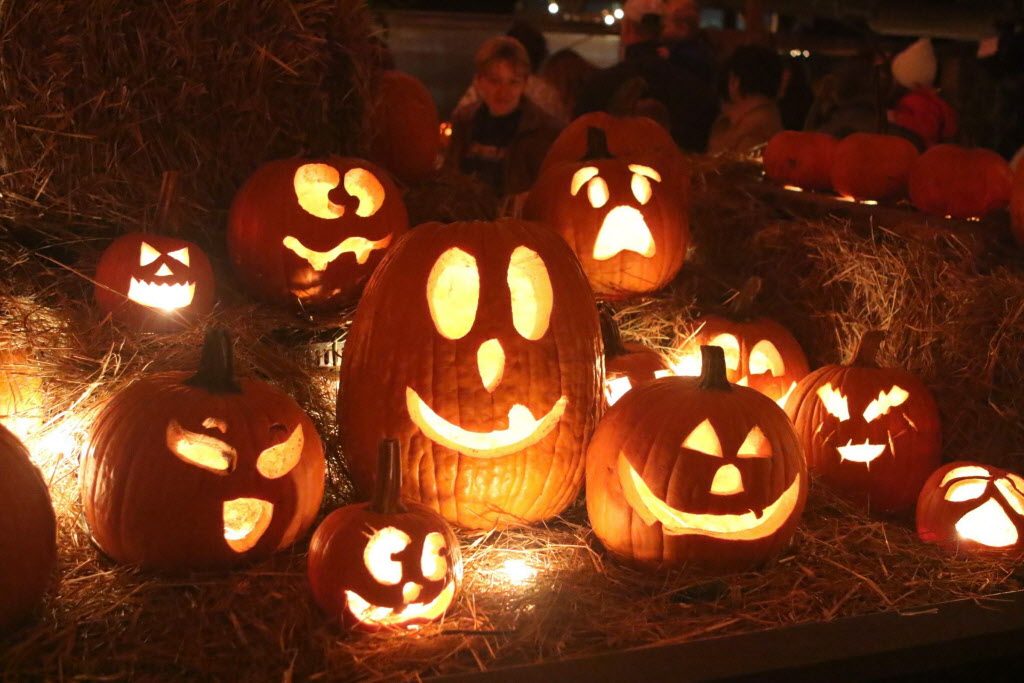 ACCESS NEPA FILE PHOTO
Creekside Gardens in Eaton Twp. is all aglow with more than 350 pumpkins burning brightly over the weekend with a reported 1,000 visitors Friday, 1,600 on Saturday and 2,000 on Sunday.

Over the years, the Creekside staff has learned methods to keep the pumpkins fresh throughout the weekend and they touch them up as necessary.

While the lit pumpkins still look “magical” earlier in the evening, Kukuchka encourages early birds to stay at least a little while past dark to get the full effect.

“That’s when it’s way more magical,” she said. “To see all those glowing faces is pretty cool. I’ve been a pumpkin carving fanatic for years.”

Now that Tunkhannock Ford has purchased the lot next to Creekside Gardens, Kukuchka was unsure about the future of The Pumpkin House.

“Without the use of that lot, The Pumpkin House couldn’t go on,” she said. “They have been really great in accommodating us.”

Creekside Gardens got its start with landscaping and selling plants, but eventually shifted its focus to retail and events.

Throughout the year, Creekside sees visitors for different workshops, as well as the Tunkhannock Farmers Market in the summer and early fall.

“What we always hope for in coming to Creekside is time to unplug and spend time with family and friends that doesn’t involve looking at a screen,” she said, noting that there are great photo worthy spots to capture memories. “So really that’s it, just to see people enjoy each other’s company and talking to one another and really experiencing something tangible.”

Admission to The Pumpkin House is $12 for adults and $8 for kids ages 2 and older. Creekside Gardens is located at 4 Village Lane in Tunkhannock.