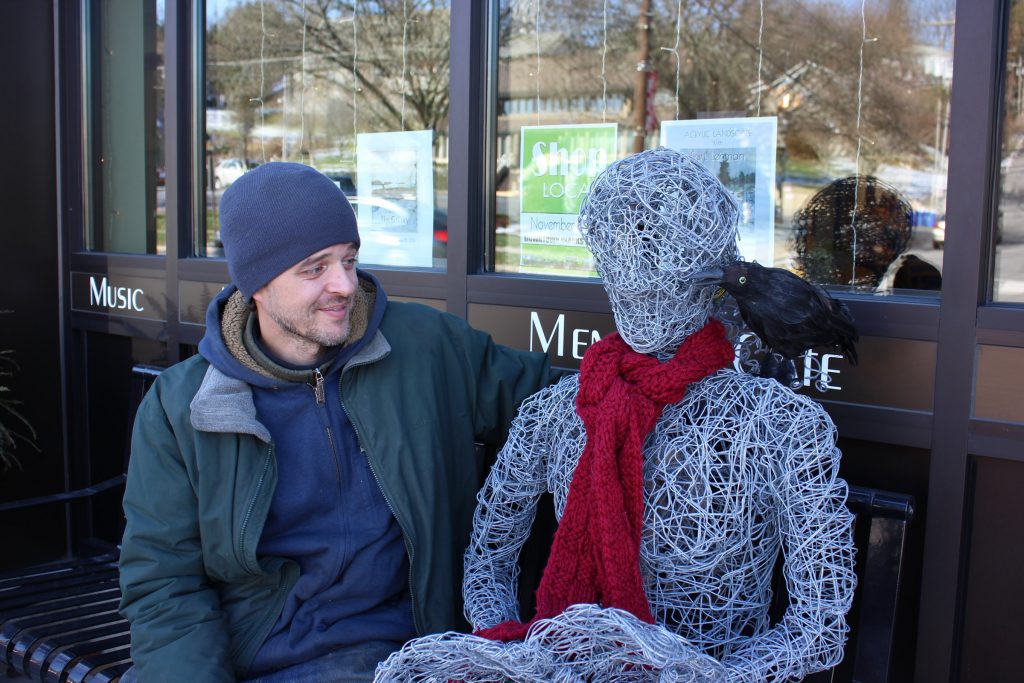 She’s a familiar landmark on State Street in Clarks Summit. Eleanor, a wire sculpture, sits on a bench outside The Gathering Place reading a book, her wire curls pulled back.

Eleanor was created in 2017 by artist Sean Brady for the first exhibit at the Gathering Place, titled “People.” Eleanor was purchased using funds donated by Eleanor Waters. The sculpture was named in her honor.

“I had seen Sean’s work down in Pittston. I have always admired it,” said Dori Waters, president of The Gathering Place.

Waters contacted Brady with her idea of a wire sculpture for The Gathering Place that could sit outside the entrance.

Brady has been sculpting since 1998. The artist works out of his home in Luzerne County where he lives with his wife, Karen and two children. Brady’s wire artistry started while he was working in a greenhouse in Portland, Oregon. One day, he began to shape wire that was used for hanging plants.

“I made a little figure out of wire,” Brady said. “My wife took it in to work and somebody liked it. It was a little figure that held a terracotta pot. After that, I started selling sculptures. They were small figures at first; all plant-themed because I worked in a greenhouse.”

Brady sold sculptures in a market in downtown Portland every weekend. He created and sold his wire figures in Portland for 10 years before moving back to northeast Pennsylvania. He made pencil holders, sporting figures and animals all out of wire. 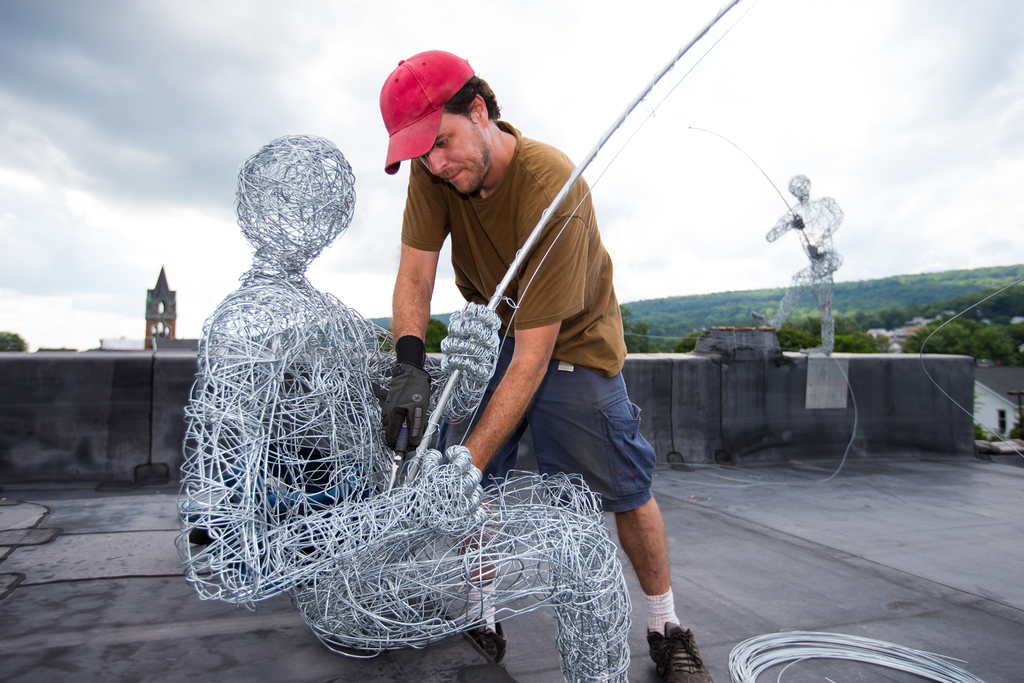 ACCESS NEPA FILE PHOTO
Artist Sean Brady works on a metal sculpture of a fisherman on the roof of a building along East Main Street in Plymouth in 2016.

The first life-sized wire sculpture Brady was commissioned to create was for a computer company.

“It was two life-size people that hold a computer desk,” Brady said.

He started making furniture and larger pieces and dreamed of being commissioned to create large installations.

His favorite local sculptures include figures on the side of the road holding a sign in Pittston and a 14-by-14-foot sun with life-size figures holding it up, all made of wire on display on Market Street in Wilkes Barre. Brady’s wire sculptures also appear on the Marquis buildings in Wilkes-Barre and Scranton.

“I have a big skier that I really liked making for Montage Mountain,” Brady said. “That was a fun one.”

Brady uses no mold or pattern for his sculptures.

“I start with the hands and feet, and that dictates the size of the figure. It kind of goes from there,” Brady said. “A large sculpture can be done in a day or two, but it destroys my hands. I give myself a week or more, ideally, because then I can work on it, step away then come back and continue.”

“I’ve always been drawn to sculptures that show movement,” he said. “Even if they are sitting, like Eleanor. She is reading. She’s actively doing something. I think that gives life to my work.”

Brady’s wire sculptures can be seen online at wirepeoplehere.com and purchased on Etsy.com and in Fly Me Home Décor in Pittston. Brady has pieces in a gallery in Philadelphia and does shows locally.

Eleanor has her scarf on as she waits for the holiday shoppers on State Street. The wire lady has been seen dressed in hats, scarves and costumes for Clarks Summit’s Festival of Ice throughout the years.

“She’s fun,” Waters aid of Eleanor. “We are all enamored with her.”