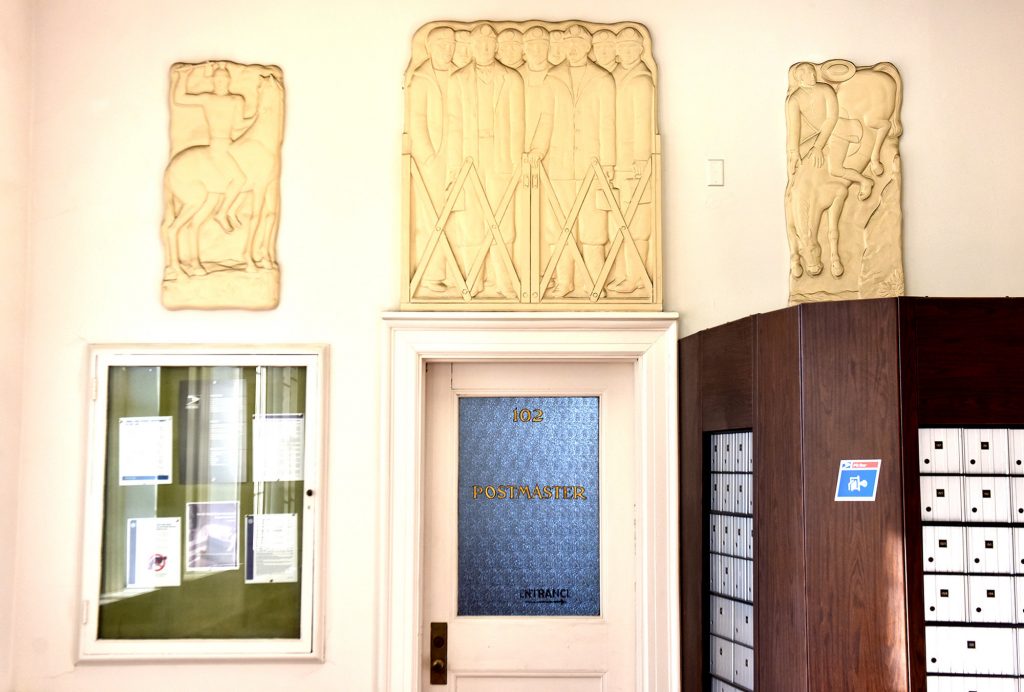 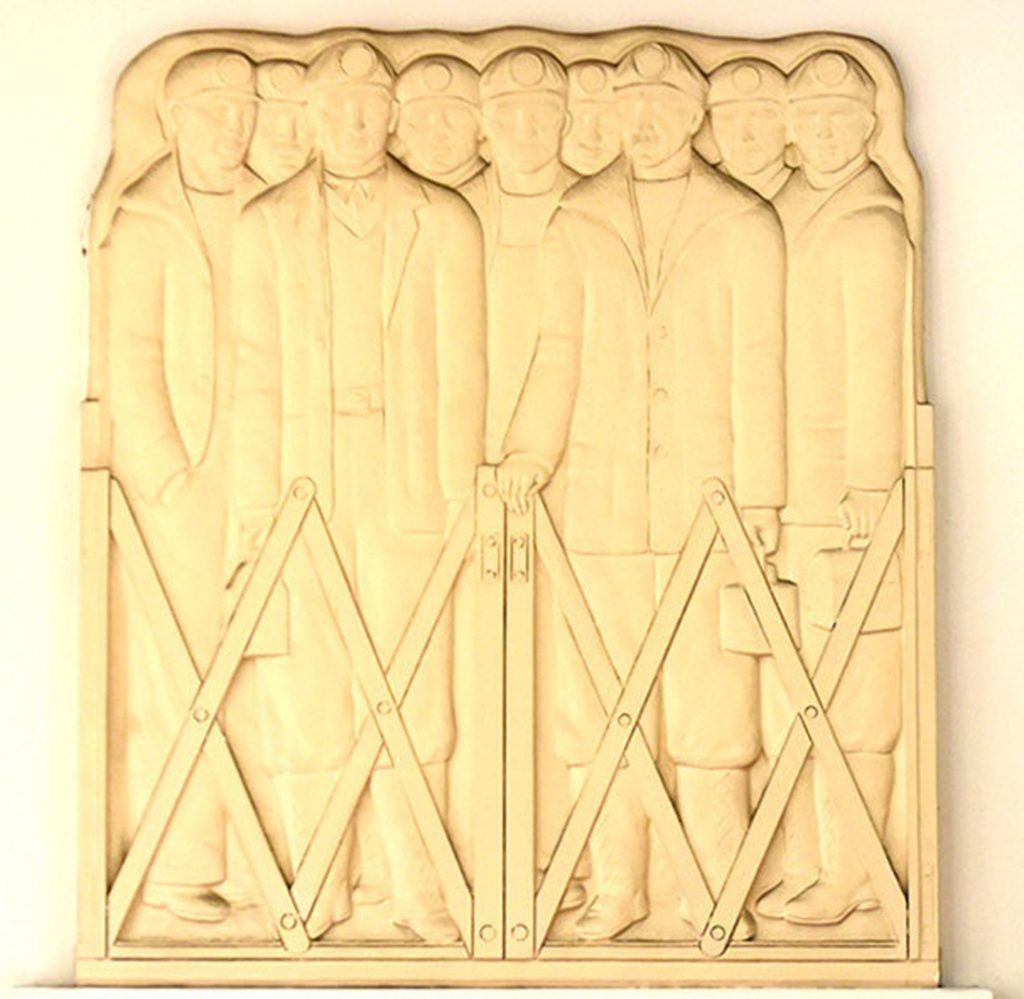 A three-panel limestone mural depicting life in the Wyoming Valley is on display at the Pittston Post Office. The left panel depicts a Native American on horseback. The center panel shows a group of miners and the third depicts the soldier from the Campbell’s Ledge legend.

Since long before the murals, sculptures, mobiles and the Art e Fekts gallery rebranded Pittston as an art center, a series of three unique sculptures have graced a wall in the Pittston Post Office lobby. Commissioned in 1938 through a New Deal program administered by the Fine Arts Section of the Treasury Department’s Procurement Division, the three-part sculpture — Native American / Mine Elevator / Campbell’s Ledge — was created by Marion Walton, an American sculptor and teacher born in New Rochelle, New York. She studied at Hunter College, and in Paris with Antoine Bourdelle and at Bryn Mawr College. She completed the sculpture in 1942.

Who better to talk about the post office piece than Jan Lokuta — the self-taught local art, architecture and history expert? Lokuta conducts art/architecture tours of local churches, organizes children’s community mural paint events at local festivals and has a large Campbell’s Ledge mural in his Dupont home. He also knows a lot about the Pittston Post Office art and murals in other Luzerne County post offices, which were created under the same program as the Pittston sculpture. Last spring, Lokuta led tours to see New Deal era murals in post offices in Plymouth, Kingston and Freeland.

Standing in front of the Pittston sculpture earlier this week, he contrasted it with the art in those boroughs.

“It differs in three ways. One, it’s not a painting, it’s a limestone relief. Two, it depicts different episodes in Vclalley history, early colonial and early mining. Three, it focuses on miners in the mines. It’s not a landscape like Freeland. Not an imagined painting like Plymouth. Not a modernist view of a breaker like the Kingston mural.”

Though the middle section of the Pittston sculpture is described as “an elevator,” Lokuta said “it’s really a cage made out of planks and wires.”

Lokuta said there is a theme, intentional or not.

“There’s a sense of men falling, of being dropped down.”

He’s talking about the middle and right sections of the sculpture. The middle section shows nine miners in a cage on their way down into a mine. The right section is a Colonial man on a horse. Lokuta said we can know the rider is Colonial by his hat and tunic. The horse’s back is arched, his nose pointed down. The rider’s hat is flying off his head. It’s a depiction of the Campbell’s Ledge myth of a colonist jumping off the ledge to avoid capture by Native Americans. The left relief depicts a Native American, hatchet in hand.

Another historical mural in a Greater Pittston building is a Sue Hand work in the former Luzerne Bank in Wyoming at Eighth Street and Wyoming Avenue. It’s really two oil on stretch canvas murals, 14 and 17 feet long. They were commissioned in 1983 by what was then the Wyoming Bank. It was later sold to Luzerne Bank and subsequently closed. The murals depict the Eighth Street Bridge, the Swetland Homestead, the Wyoming Monument and the Swoyersville Harry E. Breaker.