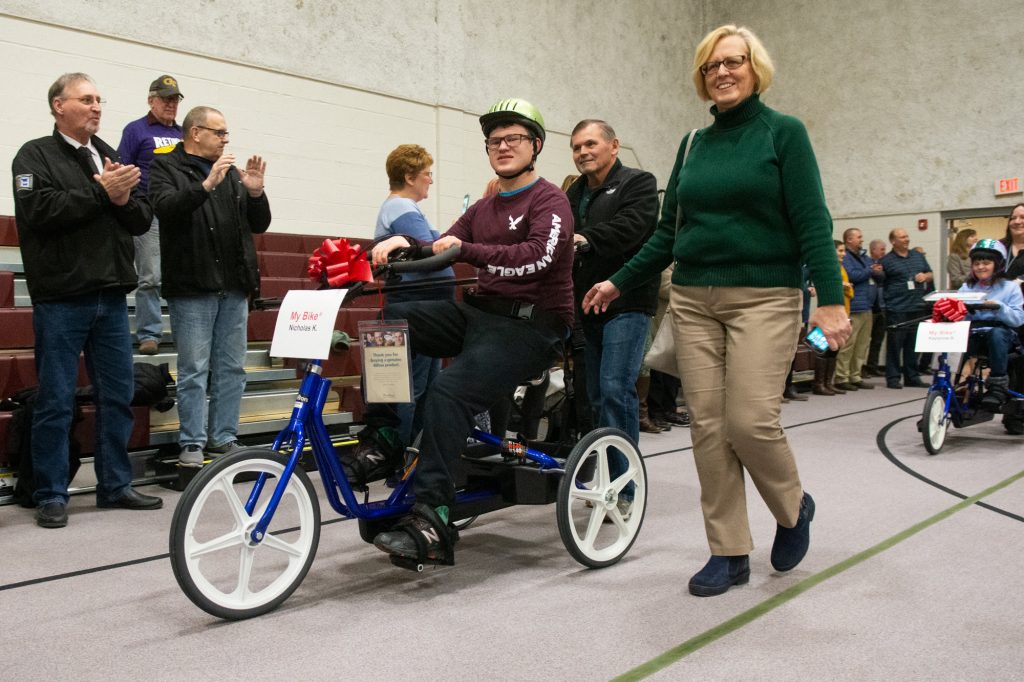 MAR LIN — Former Pennsylvania Gov. Tom Corbett celebrated with children and their families Monday who received a special gift through the charity Variety.

Monday was the first time the program was piloted in Schuylkill County. For students like Nicholas Kramer, of Minersville, and Kash Filiac, of Saint Clair, it may provide a path toward greater independence, their families said.

“I looked at Charlie and said you have to take this all around Pennsylvania, how about the tri-state area? He took me up on it,” Corbett added.

There has been $5 million worth of equipment provided since 2012, all of it funded by donations, said the former governor, who was previously a history teacher and basketball coach in the Pine Grove Area School District. His wife, Susan Manbeck Corbett, was from Pine Grove and he still has two sisters-in-law who reside there, he said. 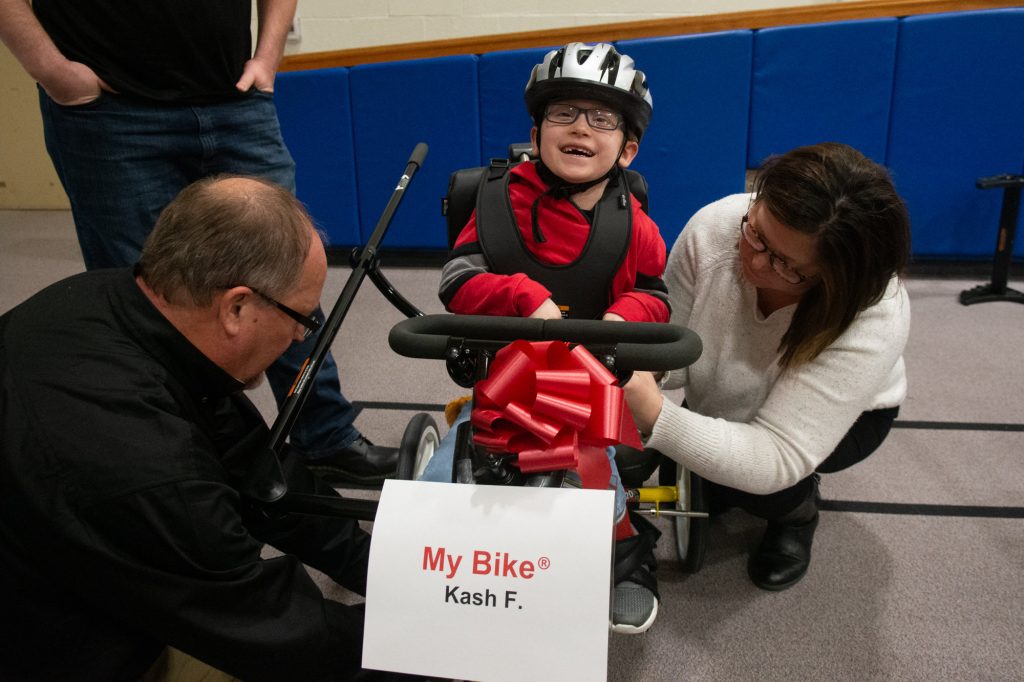 Corbett, a grandfather of six, said he was pleased he was able to return “home” to Schuylkill County for the presentations.

“When they told me how successful IU 29 was, I was pleased. IU 29 and the staff, thank you for what you’re doing,” Corbett said.

Laura Kramer thought her son, Nicholas, would have renewed opportunities with his new bike. Nicholas, 17, is a student in the life skills class at Minersville Area and had attended IU 29 for early intervention. Kramer said her son had a congenital heart condition and suffered a stroke that left his left side weakened. He quickly outgrew a bike he had when he was a 4-year-old.

“It’s an opportunity that he lost. This will give him a chance to be like other kids. He’ll be able to ride around and socialize,” Kramer said. The family has a patio at their Minersville home where Nicholas will also be able to explore.

“Thank you,” Nicholas told LaVallee as he awaited the bike distribution.

Nicholas’s former physical therapy assistant, Gemma Geary, came to Monday’s ceremony. She had worked with him for more than 10 years, she said.

“I was thrilled,” Geary said. “This has really been a team effort, with the staff and his parents and Nicholas, who worked very hard,” Geary said.

Kash, 6, a Saint Clair Area Elementary kindergartner, beamed as he sat atop his new set of wheels after taking them for a test drive in the school gym.

He picked the bike’s yellow color, according to his parents, Kyle and Jessica Filiac, of Saint Clair.

“He’ll be able to go out and ride with his friends. He will be able to access things that typical kids can access. It will help him feel that he’s part of a group. He’s very determined and it’s going to help him further his skills,” Kash’s mother said. “He’s very happy and he’s smiling a lot.”

LaVallee shared photos and information about other Variety program recipients. Among them was a family whose son never visited the ocean until he received his stroller; a girl who had suffered a fractured leg but couldn’t tell anyone until she received her communication device; and a young man who equated receiving his new bike to getting his very own car.

“Your kids have changed my life,” LaVallee told the families gathered.

Families can apply for more than one free device if their child is eligible. Within three years, their children can move up to a larger bike, for instance, if they need one, simply by reapplying and turning in the smaller bike, LaVallee said. Each bike is valued at $1,800. 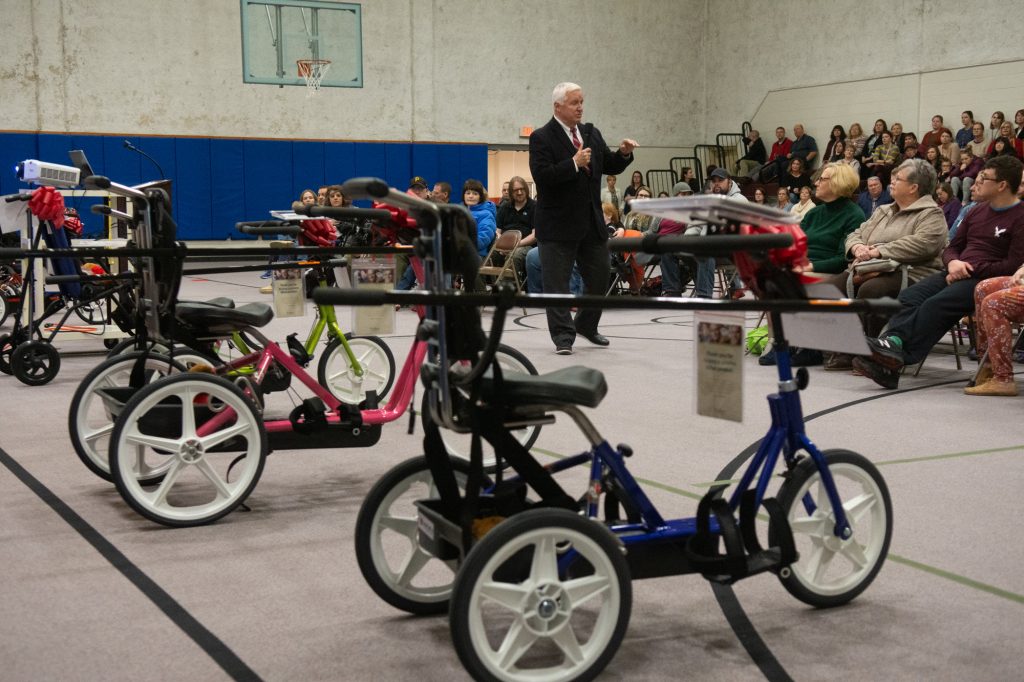 DAVID MCKEOWN / STAFF PHOTOGRAPHER
Former Gov. Tom Corbett, a member of the Variety board of directors, speaks about the adaptive bicycles that were given away to students with disabilities Monday at Schuylkill Intermediate Unit 29, Mar Lin.

At least 52 Pennsylvania counties are served by Variety and another 12 counties in West Virginia.

The American Federation of State, County and Municipal Employees and the United Steelworkers Union supported Variety’s effort. Blackburn’s, a medical equipment company, helped with the ordering and fitting process for the children, according to Glover.

Brennan presented LaValle and Corbett with certificates of appreciation and also thanked the friends and partners from industry and labor who helped make the equipment distribution possible.

Corbett guided Jacoby on a ceremonial trip around the gymnasium on one of the vehicles, leading a bicycle parade through the gym and adjoining hallway.

Monday’s presentation was just the start. Additional presentations will be held as more Schuylkill County families apply for the free equipment. Students do not have to attend the IU to be eligible for the Variety program, according to Debra Arnold, IU 29 director of special eduction. Arnold said interested families can still reach out to her at arnod@iu29.org or by calling 570-544-9131, Ext. 1211. More information can be found online at www.varietypittsburgh.org/applynow or by calling Variety directly at 724-933-0460.

It provides recipients — from age 3 to 21 — who have mental, physical or sensory disabilities with customized, adaptive devices who meet eligibility and family income guidelines. A family of four, for instance, can earn $128,750 or less and be eligible.