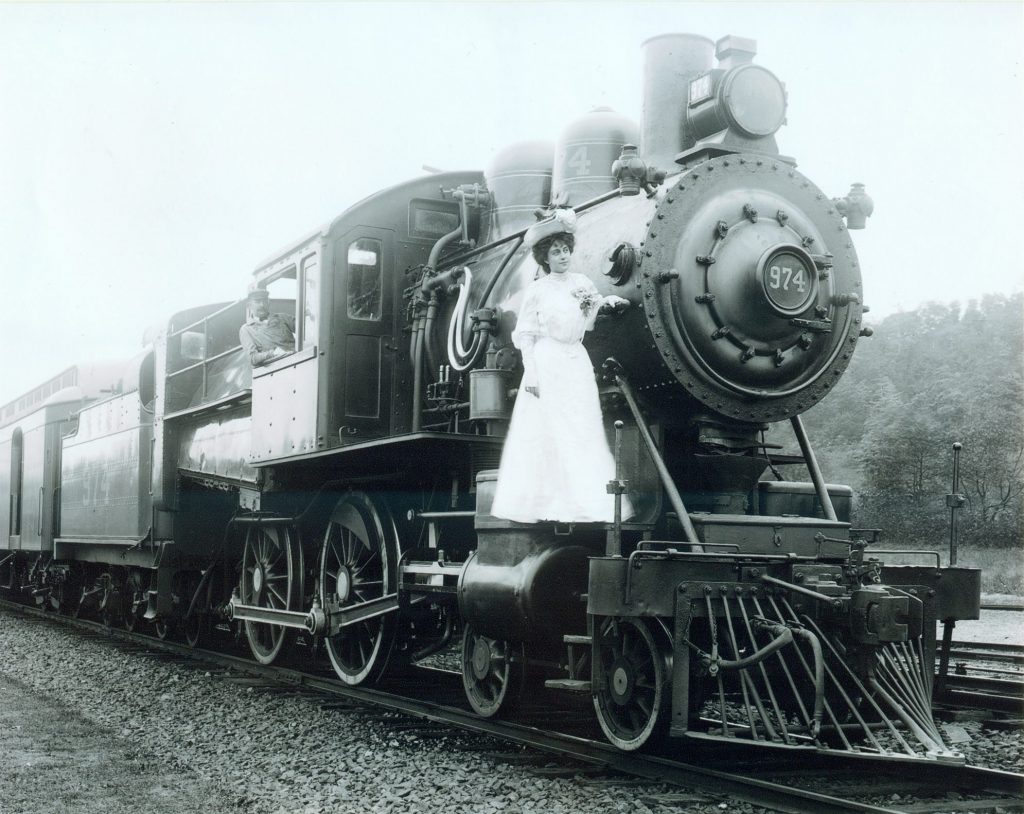 A nearly forgotten classic cocktail has roots in Scranton and its railroad history. The Brandy Alexander — a seductive mix of brandy, cream and chocolate liqueur — is worth revisiting today.

The origins of classic cocktails invite speculation and debate. One theory holds the Alexander was created for a royal wedding.

The dominant theory takes us back to a New York City restaurant named Rector’s at, or around, 1900. The Lackawanna Railroad had just unveiled a marketing campaign that included fictional spokeswoman Phoebe Snow promoting passenger service from New York to Buffalo. Depicted as very pale, clad in the whitest clothes and not shy about sitting near the coal-fired locomotive’s stack, Phoebe Snow touted the so-much cleaner anthracite coal: “Says Phoebe Snow about to go upon a trip to Buffalo: My gown stays white from morn til night upon the road of anthracite.”

Rector’s bartender, Troy Alexander, was asked to come up with something special that reflected the goals of the campaign. He combined all the white things: gin with cream and chocolate liqueur (creme de cacao). He most likely used the clear version, white creme de cacao, rather than the dark version, which would have made a khaki-colored cocktail, and who would want that? The cocktail became known as the Alexander.

Some time later, free from the obligation of being the whitest of drinks, gin was ditched for browner brandy for the Alexander No. 2, or the Brandy Alexander. During Prohibition, the drink became a hit because it sweetened harsh bathtub hooch. In the mid-century, it became enormously popular. Jack Lemmon used the heretofore unthreatening drink to turn Lee Remick into an alcoholic in 1962’s “Days of Wine and Roses.” John Lennon loved Brandy Alexanders, comparing them to milkshakes. Surely, the drink inspired him to write a song.

The Phoebe Snow campaign lasted about half a century. A state-of-the-art train named after her rolled out in the 1940s, but in the decades that followed, the service couldn’t compete with the switch to automobiles and air.

The fate of the Brandy Alexander seemed to follow, first as Bailey’s Irish Cream claimed shelf space and offered a similar, if inferior, experience with no bartending. Kahlúa and liquid dessert cocktails such as the Mudslide and White Russian followed. The use of “creme” with liqueurs indicates sweetness, not the presence of dairy or cream. Still, bartenders hate using perishables that can go bad or sicken customers — another blow against the Brandy Alexander.

When made light on the liqueur and topped with fresh grated nutmeg, however, the Brandy Alexander offers a simple, elegant and satisfying treat.

Try the Brandy Alexander in lieu of dessert or as your grandparents and great-grandparents had — as a nightcap rewarding a hard day of work. I get satisfactory results for a buck or two per drink using domestic brandies (Gallo, Christian Bros., Paul Masson) and inexpensive creme de cacao, white or dark. Put two parts brandy and one part each of creme de cacao and cream on ice and shake. Strain into a cocktail or martini glass and grate fresh nutmeg on the top of the foam. Made with the original gin, the Alexander definitely is worth trying.

The Phoebe Snow train was retired 53 years ago, on Nov. 28, 1966. Let’s toast the old girl and Scranton’s railroad history with the drink she inspired, the Brandy Alexander.