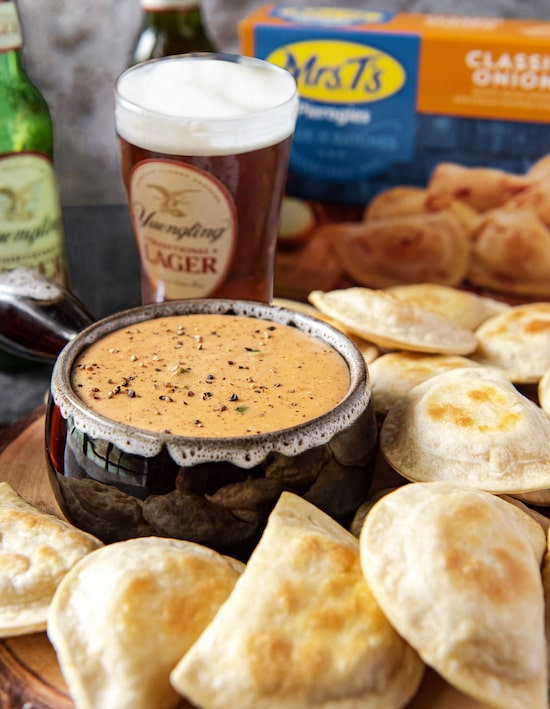 The recipe team-up of D.G. Yuengling & Son and Ateeco Inc. launched in early December continues with the release of a new recipe for New Year’s Eve and Super Bowl parties.

Yuengling, founded by David G. Yuengling in 1829 and the oldest brewery in the United States, has been celebrating its 190th anniversary this year. In addition to Sheryl, the order services manager, her three sisters — Debbie, Wendy and Jennifer — represent the sixth generation of the family working in the company.

Ateeco was founded 67 years ago in Shenandoah by Theodore “Ted” Twardzik Sr. using the family recipe of his mother, Mary Twardzik, the original “Mrs. T.” He first sold the pierogies to the Capitol Food Market in Shenandoah in 1952, and the company now produces about 600 million frozen pierogies per year.

“We are very excited to release our second recipe with Yuengling,” Ateeco Assistant Public Relations Manager Meghan Heim said. “Sheryl Yuengling did an awesome job coming up with a recipe that highlights both the Lager and our pierogies. This recipe takes ‘chips and dip’ to the next level.”

On the “& Daughters” blog on the Yuengling website, Sheryl wrote the dip is “a fusion of spices, jalapenos, hot sauce, and our famous Traditional Lager.”

“Whether you bake, fry, or even air fry your Mrs. T’s Pierogies,” she wrote, “this beer cheese is the perfect dip for your game day celebrations or holiday festivities and will be sure to have your loved ones wanting more.”