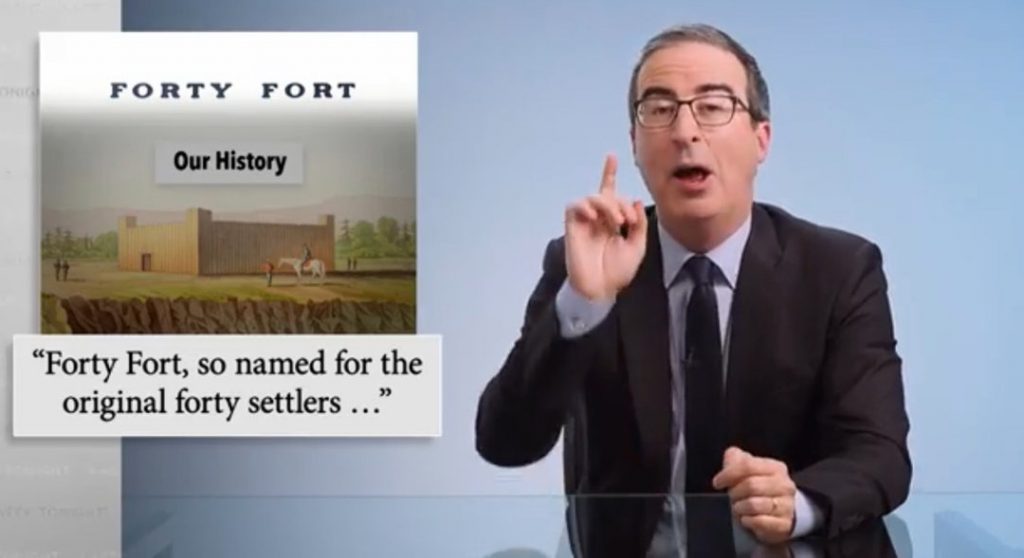 During his popular HBO television show, comic and political commentator John Oliver highlighted an alleged voter fraud case out of Forty Fort — and then questioned the origins of how the Luzerne County borough got its name.

In Sunday’s season finale of “Last Week Tonight,” Oliver shared a WNEP-TV report about a Republican man from Forty Fort charged in October with allegedly trying to obtain an absentee ballot in the name of his deceased mother.

Oliver called it “one of the few seemingly legitimate cases” of voter fraud in the country, disputing claims by President Donald Trump there was widespread fraud in the 2020 election.

Then, Oliver turned the subject to how Forty Fort supposedly got its name.

“Apparently the town was named after the original 40 settlers who built a fort there. But I call (expletive) on that because I refuse to believe that there just happened to be 40 settlers who named their fort ‘Forty Fort’ without being fully aware of how funny that sounds,” Oliver says.

Forty Fort Mayor Andy Tuzinski, a Republican, wasn’t laughing at the mention in the national spotlight.

“I don’t even want to dignify that,” Tuzinski said. “I’m tired of these elitists.”

Tuzinski said people keep mentioning the Forty Fort case, but no one in the national news ever mentions there are voter fraud cases in Philadelphia, such as the one against former Philadelphia Judge of Elections Domenick J. Demuro, who pleaded guilty earlier this year in federal court to accepting bribes to cast fraudulent ballots and certifying false voting results during the 2014, 2015 and 2016 primary elections in Philadelphia.

Oliver’s news comedy show averages 4.5 million views a week. As of Monday afternoon, the You Tube post of the show featuring the Fort Fort segment had been viewed more than 3 million times.