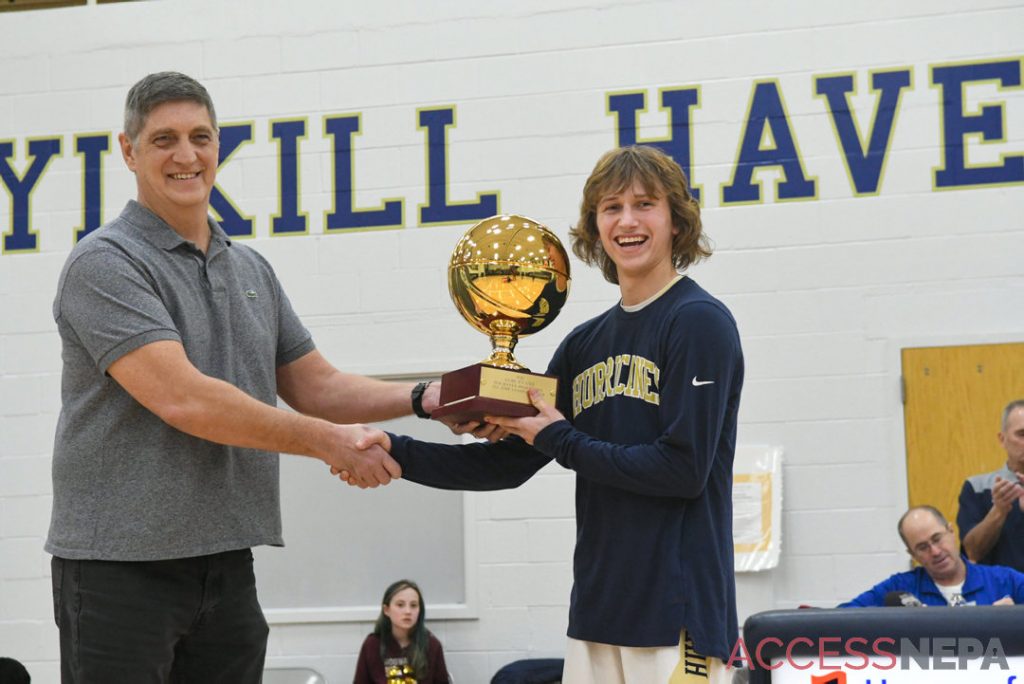 There’s a song in the Broadway show “On the Town” that says, “The Bronx is up …”

That’s certainly true for Fordham freshman Albe Evans, who is fitting in nicely in his new “home” at Fordham’s Bronx campus in New York City.

Evans, a three-sport star at Schuylkill Haven, is fitting in particularly well to his new role as a freshman guard on the Fordham men’s basketball team.

It’s not every day a student-athlete can walk on at a Division I program, especially in a tough conference like the Atlantic-10. But Evans has done it.

Evans received a partial scholarship when he committed to Fordham to play golf, but he had also been recruited for basketball. Because of COVID, there was no fall golf season this year and Evans was able to accept the basketball coaches’ offer to become part of the team.

Many may have assumed that given the 19-year-old Evans’ 5-foot-11, 160-pound frame and the rigors of D-I basketball, Evans would be headed only to the golf course to continue his athletic career.

As a senior, Evans led the Hurricanes to an 11-1 league mark, the Schuylkill League Division II title and a second-place finish in the District 11 AA team competition.

To top it off, he is the current holder of the Schuylkill County Amateur Golf Match-Play Tournament title.

While the golf course is certainly not out of the question, it is on the hardwood that Evans really wanted to test himself.

Fordham was just one of a number of schools that Evans was looking at that had great academics and would allow him to play both basketball and golf. Others on his list included American, Lafayette, Dickinson and Franklin & Marshall. American, which has no golf program, was the only school where Evans would not have had the dual-sport possibility.

He noted that he was originally being recruited for basketball, and when he visited Fordham’s campus the summer before his senior year at Haven, it was the basketball team and coaches he met with, toured with and spent time with.

Working primarily with associate head coach Michael DePaoli, who helped recruit Evans, Fordham let him know he had a spot on the team if he wanted it.

He did. And Fordham is glad to have him. 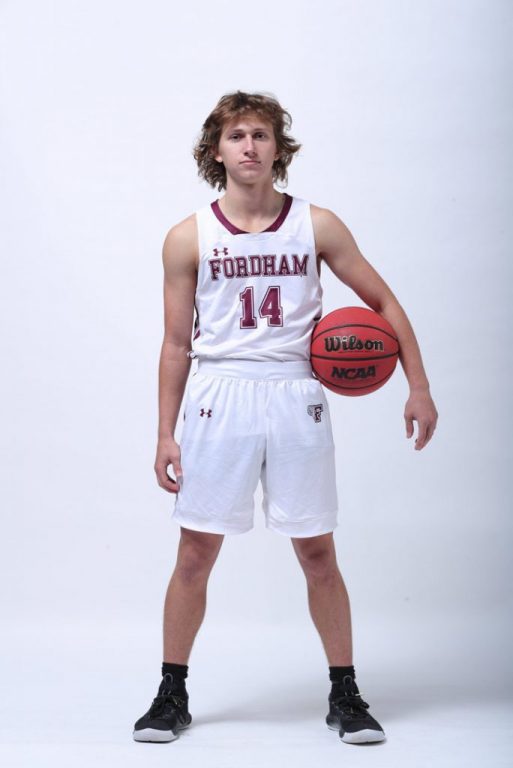 DePaoli praised Evans as a “tremendous person and teammate, unselfish with no ego, who bought into the idea of making the team better.”

He went on to praise Evans’ attitude and his toughness — as well as his shooting ability — saying he “helps uplift the team every day.”

One of three freshmen on the team, Evans has yet to see any game action, said frankly he “… doesn’t expect to see much this year, but will be ready if called upon,” and added that he “… plans to work hard to earn significant time in the years to come.”

He noted that because of eligibility changes due to COVID, he can play five years if he wishes, or maybe even six if it turns out this year could be considered a redshirt year.

Evans handled a variety of tasks on the court at Schuylkill Haven, where he was a four-year starter and the school’s all-time leading scorer with 1,760 points. He was a first-team All-Area selection, averaged 20 points per game as a senior, hitting 80 3-pointers, and led the Hurricanes to their first District 11 playoff berth in eight years.

In his final season, Evans helped the team to a 20-6 overall record, its first Schuylkill League Division II title since 2006, the District 11 Class AA title game and a PIAA Tournament berth.

At Fordham, Evans is now strictly a point guard. As such, he is focusing his on-court work on running the Rams’ attack and improving his dribbling, passing and shooting range.

Ultimately, while Evans’ decision to hit the court was made easier by the COVID-caused fall golf season cancellation, the pandemic has not spared the basketball team or Evans either.

Fordham saw its first six games canceled, is currently 1-4, is playing only conference games this season and is playing without fans in the stands. Evans said he himself and most of his teammates had fallen victim to the virus. He had it over Thanksgiving, but was asymptomatic.

In the meantime, Evans is truly enjoying the college experience.

“D-I college ball is really exciting. It’s a very different atmosphere,” Evans said. “I spend a lot of time with my teammates and coaches. I have been in the gym at midnight several times shooting with my teammates. The team has a strength coach who works with me daily. I feel I’m really improving.”

Evans is no slouch in the classroom either. He is an Economics major (at least for now) and pulled down a 3.60 grade-point-average in his first semester with three A’s and two B’s. That’s good enough to have made the Dean’s List, but Fordham does not confer that honor until the end of a student’s freshman year.

He carries a full class schedule of five courses, and in another concession to COVID, he’s taking classes virtually while living on campus the second semester. 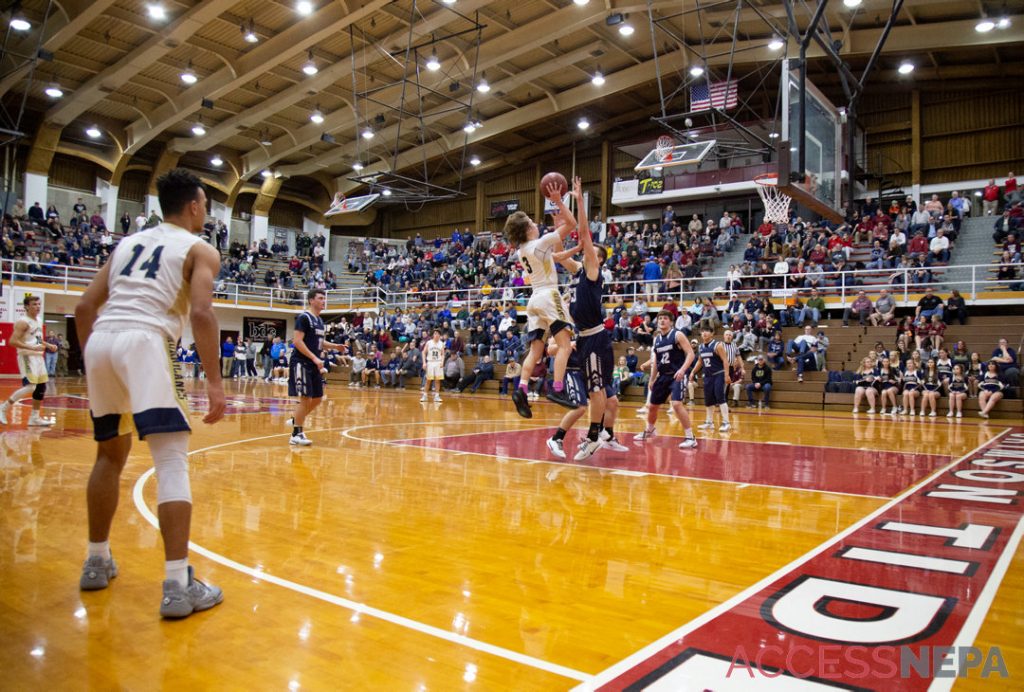 His schedule is a busy one with morning and afternoon practices and classes and course work in between. Evenings are often a time to hit the gym to do some extra shooting, if the academic schedule permits.

“You really have to make a time commitment and apply yourself,” Evans said. “Time management is important and possessing a plan about how to do that is a good thing to have.”

He has certainly not ruled out collegiate golf competition either.

“If there is golf, I’m planning on playing,” he said.

Evans said he will wait to make that decision until he knows the off-season commitment required by the basketball program to receive more playing time.

Schuylkill County hoops fans should take note of an upcoming A-10 matchup that offers a double-dip of special local interest. Evans and the Fordham Rams will travel to Richmond, Virginia, on Feb. 15 to lock horns with another group of Rams — Mike Rhoades-coached VCU, which is currently 10-3.