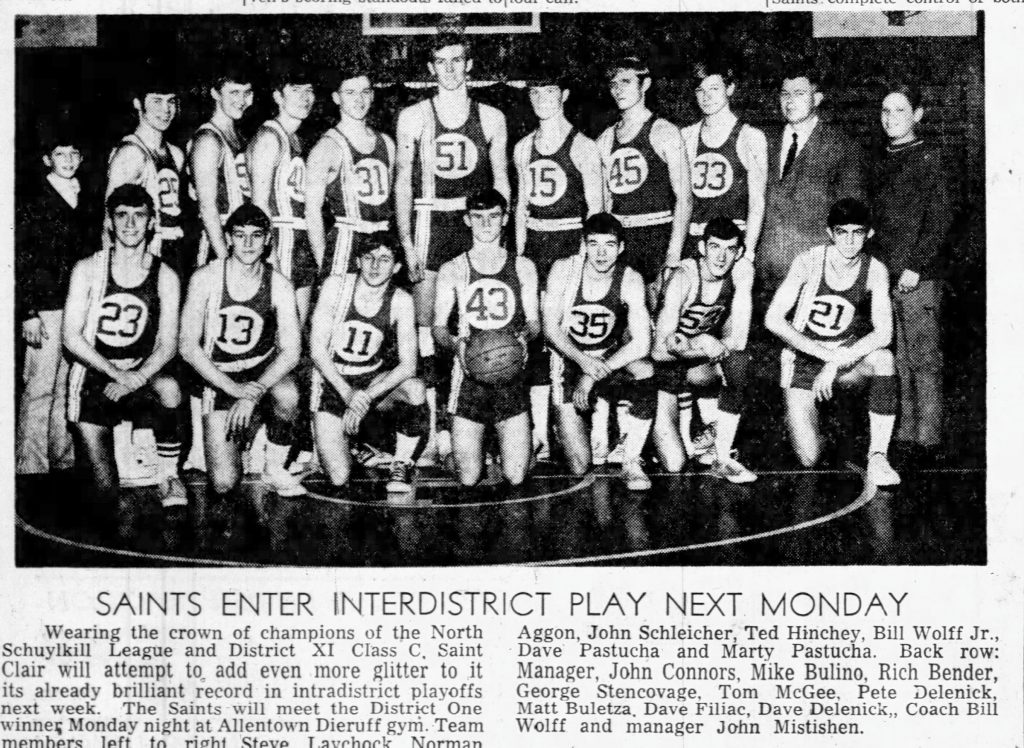 In front of a record crowd of 9,356 people at the Harrisburg Farm Show Arena, in the 1970 PIAA Class C boys’ basketball state championship game, Saint Clair came out of the gate cold and quickly fell behind District 6 champion Laurel Valley.

“I remember sitting down on the bench and thinking, ‘Wow Pete, we’re not going to come this far to lose,’ ” Delenick recalled. “Coach wasn’t happy. He said, ‘Press them.’ We switched to a 1-2-1-1 zone press that completely changed the face of the game. We got turnover after turnover because of our athleticism. Matt Buletza, Tom McGee, Mike Bulino … we just had superior athletic ability.

“The other team didn’t face a press that squeezed them as much as we did. By halftime, we were up a bunch.”

Delenick, a 6-foot-5 senior center, compiled a game-high 26 points and pulled down 11 rebounds, McGee added 20 points, 10 assists and six steals, and junior forward Dave Bender collected 15 points and 16 rebounds as the Saints completed a 26-3 campaign with a 76-55 win over Laurel Valley.

A special reunion/recognition of Saint Clair’s championship team was scheduled for Friday night at halftime of the district’s annual Hoops for Hope game between the students and Saint Clair police officers, but was postponed until May due to the coronavirus outbreak.

That didn’t stop the main characters from the Saints’ storybook run from taking a walk down Memory Lane when asked to reflect on the glorious season.

Delenick recalled listening to the radio in 1961 when the Saints lost 51-41 to Fort Cherry in the PIAA Class B state title game.

“It was heartbreaking to see those guys lose,” Delenick said. “I knew I was going to do everything I can to bring home the bacon.”

Delenick was a four-year starter who finished with 1,797 points and would go on to play college ball at Yale. Bulino, a senior forward, moved into the starting lineup as a junior during the 1968-69 season, while McGee, a senior guard, was the sixth man as a junior. Buletza, a senior guard, and Bender were first-year starters to open the 1969-70 season.

“We were fortunate enough to come up through the Biddy Basketball system together,” Buletza said. “We got our fundamental skills drilled into us at an early stage. We had great coaches at the Biddy level, great coaching in 7th and 8th grade, and by the time we got up to the final stage, we just kind of polished it off.”

Added McGee: “Pete Delenick was 6-5, started as a freshman, had a great career. He had size, could shoot, rebound. The other four guys, three of us as juniors were kind of buried as the 6-7-8 guys on bench. As sophomores was played JV, as freshmen we were on the freshman team.

“But we competed against these guys everyday in practice, juniors and seniors with Pete. How all of a sudden does a team like this gel? It was an amazing feat.”

Delenick said the motivation to win a state title came one year prior, when Saint Clair let a 15-point, fourth-quarter lead in the Eastern final against Elk Lake slip away in a 68-61 defeat. Delenick hurt his knee in that game and could only watch as seniors John Holobetz, Jimmy Mansell and Billy Handley saw their season end one game short of the state finals.

“We were ahead by 15 points, and I hurt my knee in that game,” Delenick said. “I couldn’t go back in the game and we lost. We went to see the championship game and Elk Lake won. We were so bummed. We were crushing them. Jimmy Mansell, Billy Handley were on that team, and it was heartbreaking for those guys who wanted to win a championship, too. 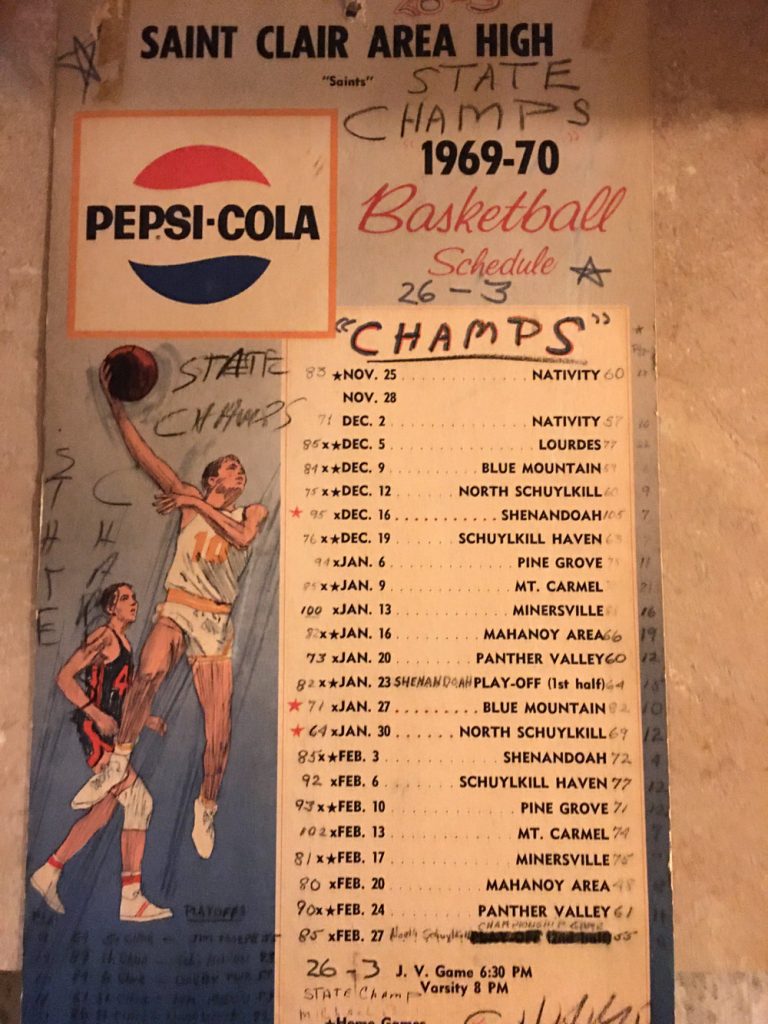 MIKE BULINO / SUBMITTED PHOTO
Saint Clair player Mike Bulino still has a cardboard schedule from the 1969-70 season that shows all of the Saints’ wins and losses.

In 1969, Saint Clair competed in the Northern Schuylkill League with Blue Mountain, North Schuylkill, Shenandoah Valley, Schuylkill Haven, Pine Grove, Mount Carmel, Minersville, Mahanoy Area and Panther Valley. The pre-cursor to the current Schuylkill League, the NSL crowned a first-half and second-half champion who met for the league title if they were different teams.

The Saints opened the season 5-0 before suffering a 105-95 loss to Shenandoah Valley in the old Roosevelt gym in Shenandoah Heights. Saint Clair would avenge that loss with an 82-64 win over the Devils in the first-half title game.

Saint Clair opened the second half with back-to-back losses at Blue Mountain and North Schuylkill. Delenick remembers Bulino laying in the middle of the gym pounding his fists off the floor after losing to Blue Mountain, which finished 7-14 under head coach Stan Wlodarczyk, the former Mahanoy Area and LaSalle University great.

“After they beat us, I can remember Mike Bulino laying on the floor, banging his fists he was so upset we lost. We took that hard,” Delenick said. “We knew from that point that we had to play like a team if we’re going to do anything.

“Stan Wlodarczyk came over to us and offered words of encouragement. I’ll never forget that.”

If there was a key to Saint Clair’s title run, it came when the Saints held practice. Wolff, who also coached football at the school, ran grueling practices that were more military-like workouts than basketball-learning practices. Those practices, the players said, increased the Saints’ stamina and fueled their run-and-gun-type style.

In an era before the 3-point shot, Saint Clair averaged 82 points per game.

“Our practices were so competitive,” said Buletza, who went on to teach 35 years in the Blue Mountain School District and coach football, basketball and baseball for the Eagles. “I remember a point in the third quarter against Laurel Valley, during a foul shot, where one of their guys said to me, ‘Don’t you guys ever get tired.’ He had his hands on knees and was really tired.

“I never met a more competitive group of guys, the entire team,” Buletza continued. “Our practices were grueling. What you do in practice you do in a game. We had tough practices and they totally prepped us for the games.”

At that time, only the district champions qualified for the state playoffs. In 1970, District 7 (WPIAL) and District 8 didn’t have a team in the Class C playoffs. There were only three classifications in 1970 — A, B, C — with Class C being the smallest.

Saint Clair opened with District 1 winner Darby Township, which the Saints beat 57-54 the previous season in the state quarterfinals.

“Coach Wolff, in the driver’s ed car, took the starting five down to see Darby Township play Jenkintown at the Villanova gym,” Buletza said. “Darby Township won, high 90s to 20 something. They were really good.

“We got out to the car, Coach Wolff looked at us and said, ‘We can beat them.’ ”

Darby Township was a running team like Saint Clair, but fielded a team of entirely African-American players. As the teams stood for the national anthem at the Allentown Dieruff gymnasium, the Darby players and their fans all gave Black Power salutes.

“They had like 2,000 fans there and brought out 15 guys who could dunk,” McGee remembered. “Before the game, there was only a mesh cage separating our locker rooms. The last thing we said was, we got into a huddle and said a Hail Mary. At the same time, they are playing a jam box next to us, Sly & The Family Stone, ‘Thank you (Falettinme Be Mice Elf Agin).’ ”

Saint Clair wasn’t intimidated, blowing out Darby Township 84-58. The Saints then beat Mount Penn 61-53 to reach the Eastern final against Northwest at the Farm Show Arena in Harrisburg.

Northwest, the District 4 champ, was the favorite coming in, led by Susquehanna Valley League scoring champion Bob Matthews, who compiled 1,471 points and averaged 25 points per game.

The Rangers, coached by legendary Eddie Gayeski, developed a game plan to take Delenick and McGee out of the game with double teams. Bulino and Buletza stepped up, scoring 21 and 20 points, respectively, as the Saints won 86-72 to advance to the state final.

“The game was played at the Farm Show, and I scored 21 and Matt scored 20. They never expected it. They tried to make us a one-dimensional team, which we were not. A lot of teams fell prey to that.” 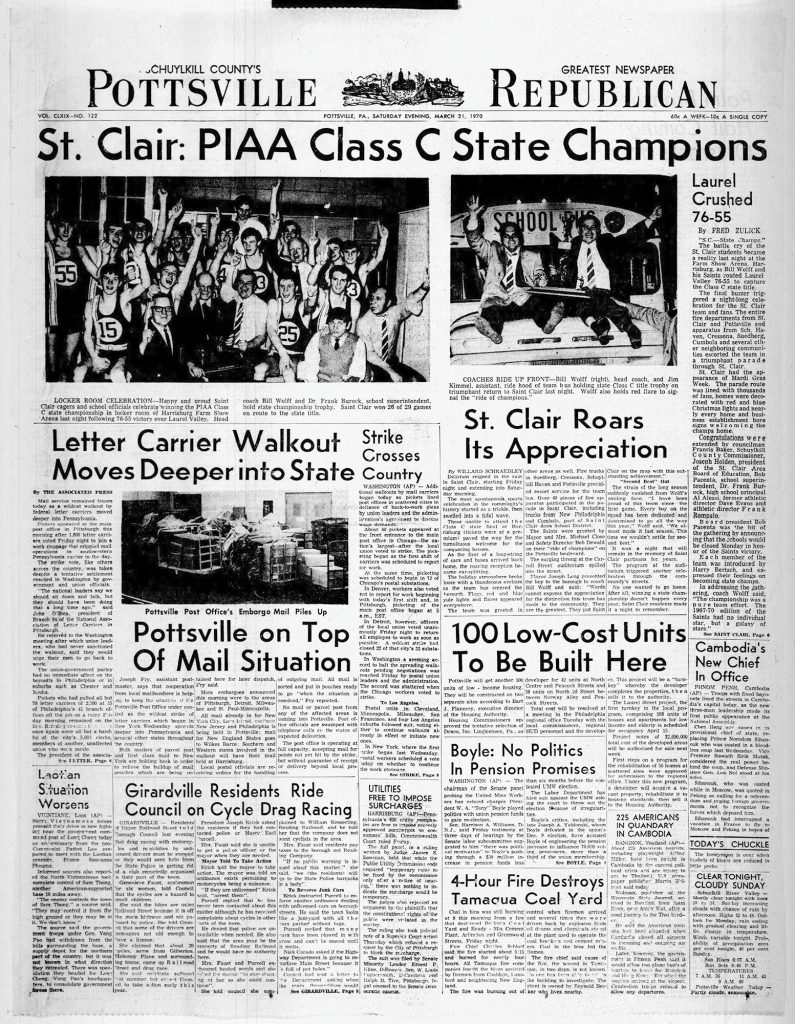 After Saint Clair beat Northwest, the Saints were situated in a cattle chute on the Farm Show floor as Avon Grove and Mansfield prepared to play in the Class B Eastern final as the second game of the doubleheader.

Mansfield was led by 6-11 center Tom McMillen, who went on to play for Lefty Dreisell at the University of Maryland, play 12 years in the NBA, become a Rhodes Scholar and serve as a Democratic U.S. Congressman in Maryland.

“We’re sitting in the cattle chute and Tom McMillen, who was playing after us, walked by us,” McGee said. “He stopped and asked me, ‘What, did you guys lose?’ I said, ‘No Tom, but you’re going to tonight.’ ”

“We went down the night before we played Laurel Valley and stayed in a hotel,” Bulino said. “Tom and I go downstairs to the rec room and play some pool. The Laurel Valley team, they all walked in, wearing Laurel Valley shirts. We knew who they were. They started playing the pinball machines.

“Tom says, ‘Watch this,’ and goes over to them. He asks them are they playing in the game tomorrow night and they say yes. He asks them, ‘Who are you playing?’ They say, ‘Saint Clair High School.’

“He asks them, ‘Are they any good?’ They said, ‘Well, they lost three games, so we feel pretty good about it.’ 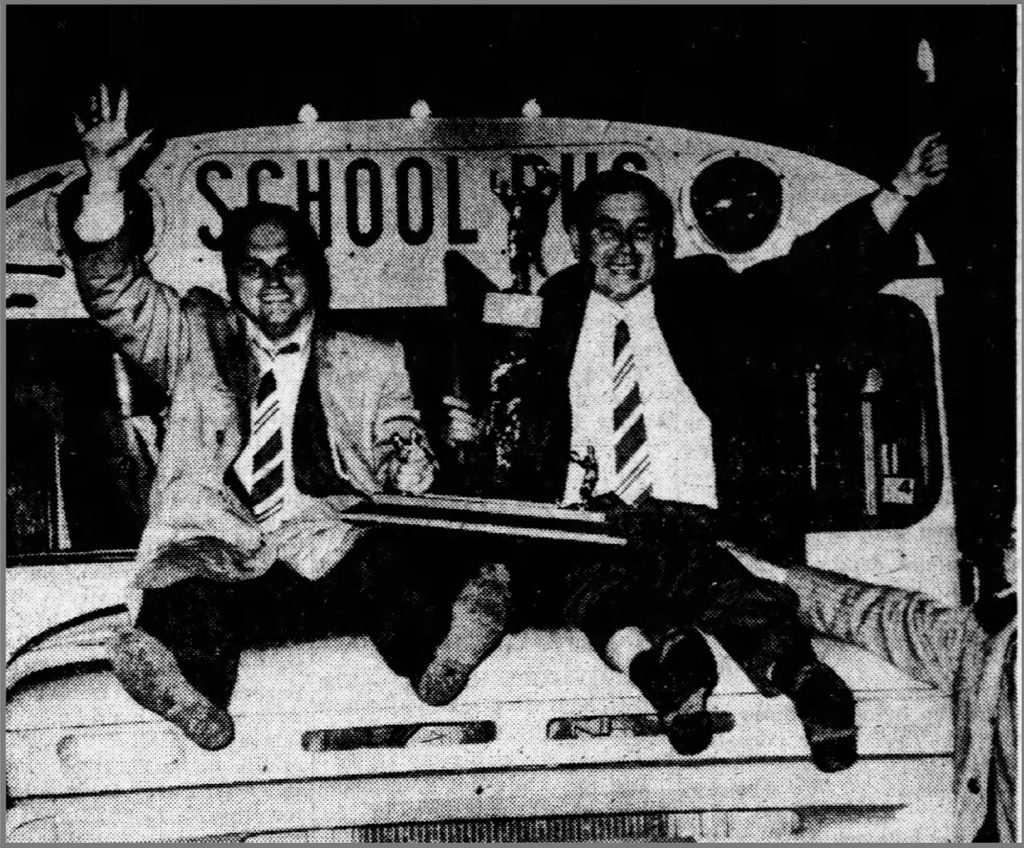 The actual game story from the March 21, 1970, edition of The Pottsville Republican, written by Fred Zulick, accompanies this story. The Saints fell behind 11-3 before Wolff’s timeout, then switched defenses to spark a 14-4 run to close the quarter.

In the second quarter, Saint Clair scored 10 consecutive points to build a double-digit lead. Delenick scored 14 of his 26 points in the frame as the Saints took a 41-29 halftime lead. They were never threatened in the second half.

“It was a total team effort, pressuring the ball, making steals,” said Delenick, who went on to become an orthopedic surgeon in northern Virginia. “I was up front on the press and I got a lot of easy layups after those guys made steals.

“We were really committed. We had a good team concept, one vision, and it was all about going all the way.”

When the game ended, the Saints carried Wolff over to the Saint Clair fan section, which was chanting “SC … state champs.”

A gigantic celebration awaited the team when it returned to Saint Clair, as a fire truck parade was accompanied by a huge party that filled Second Street — then Route 61 — in the borough.

“When we got back into Saint Clair, it was shoulder to shoulder,” Bulino said. “The whole main street, it was like Times Square. There must have been 5,000 people, the whole town, the fire trucks. It was crazy.”

Delenick was a first-team All-State selection while McGee, whose daughter Erin won two state basketball championships as a player at Nativity, was a third-team All-State pick.

Only the Saints have marched home with gold.

“I look back on it like yesterday,” Delenick said. “That was probably more of a high point for me than getting my doctorate degree. It’s something I really, really treasured.”