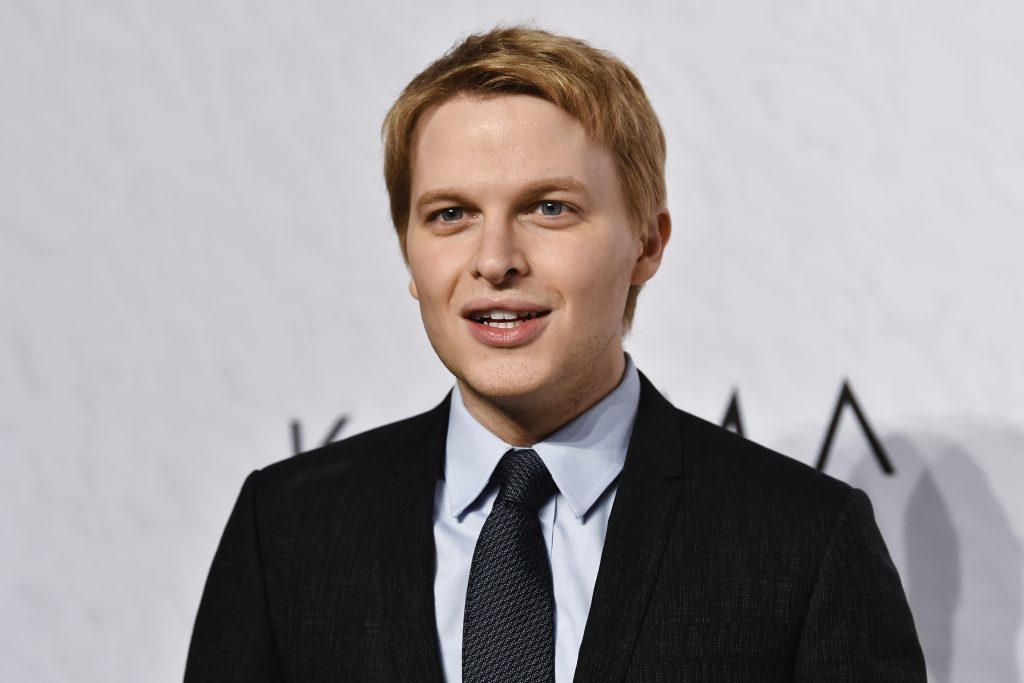 Lies, spies and NBC: Ronan Farrow on the stunning revelations in ‘Catch and Kill’ 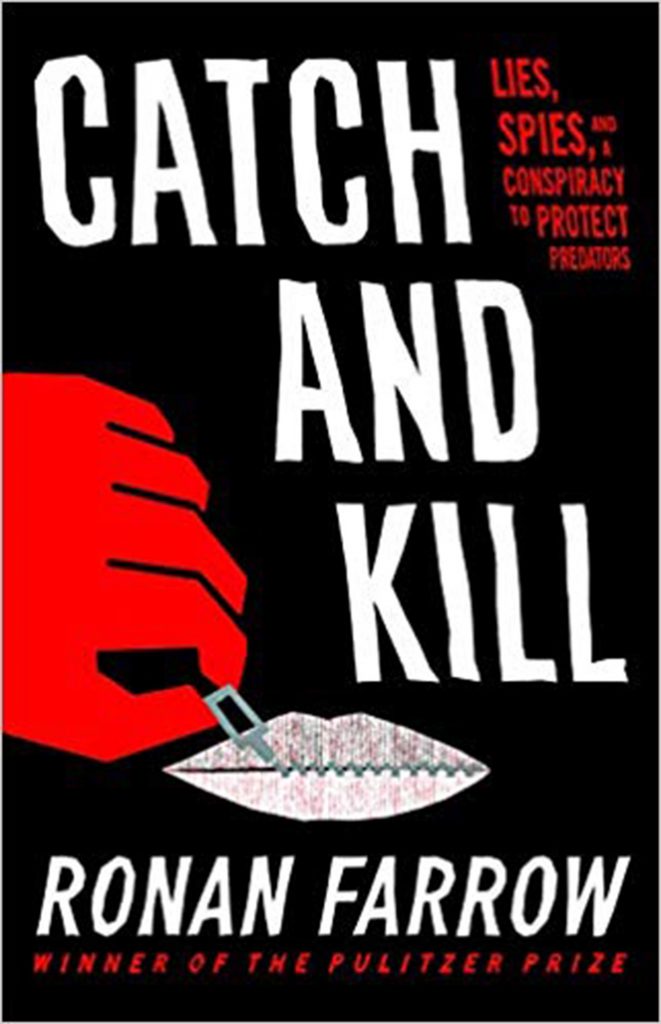 LITTLE, BROWN AND CO. / TNS “Catch and Kill: Lies, Spies, and a Conspiracy to Protect Predators” by Ronan Farrow

Ronan Farrow was not surprised that even before the official publication date of his bombshell-dropping book “Catch and Kill: Lies, Spies, and a Conspiracy to Protect Predators” people were calling him a liar.

“In most of the stories I report on, there are similar kind of smear campaigns that spin up,” he said recently. “There’s an effort to make it as underhanded and personal as possible; there are outright untrue statements that are trafficked.”

Only this time, at least one of the statements he was referring to comes from his former employers at NBC News, where, ironically enough, he began the investigation that would eventually result in this book.

It was for NBC News that he began investigating Harvey Weinstein after Rose McGowan tweeted that a producer, whom many assumed was Weinstein, had raped her. And it was NBC News that, according to Farrow in “Catch and Kill,” shut down his story under pressure from Weinstein.

Pressure that included threats to expose then-“Today” host Matt Lauer, who according to Farrow’s book also had been accused of harassment by several women, who were given settlements and nondisclosure agreements by NBC News, long before Lauer was fired in 2017.

As news of the book’s contents — including the first revelation of the rape allegation made by Brooke Nevils that led to Lauer’s dismissal — got out, Lauer issued a categorical denial, as did Andy Lack, chairman of NBC News and MSNBC. Lauer says the sexual relationship he had with Nevils was consensual; Lack says the decision to spike Farrow’s story was because it did not meet NBC’s journalist standards. Farrow took his reporting to the New Yorker, which published the investigation, for which Farrow won a Pulitzer.

“It disappoints me to say that even with passage of time,” Lack wrote in a memo to staff last week, “Farrow’s account has become neither more accurate, nor more respectful of the dedicated colleagues he worked with here at NBC News. He uses a variety of tactics to paint a fundamentally untrue picture.”

Those “tactics” include documenting in “Catch and Kill” a series of highly detailed and increasingly excruciating conversations in which the president of NBC News, Noah Oppenheim, tells Farrow to back-burner, then stop reporting the Weinstein story, even when that means canceling on-camera interviews with women who had already gone on the record to Farrow with their accusations. According to “Catch and Kill,” after the story breaks of how Farrow came to be reporting for the New Yorker (much of it via pointed on-camera questioning of Farrow by MSNBC’s Rachel Maddow), Oppenheim begs Farrow to tell people that he “was not the villain.”

“There was never a reasonable interpretation that was about journalism, the order to stop pursuing this,” Farrow says. Indeed, on the day of our conversation, Farrow’s then producer, Rich McHugh had written an essay in Vanity Fair in which he backed up the exchanges chronicled in “Catch and Kill” and accused Lack and Oppenheim of being “more like members of Weinstein’s PR team than the journalists they claim to be.” When asked how these conversations were so meticulously re-created for the book, Farrow points to the author’s note that prefaces “Catch and Kill.”

“While I cannot reveal any sources or methods for any one scene what I can say is that any time you see quotations it is from a direct first person contemporaneous account, transcript or recording, and you’ll notice that those quotes have not been disputed as part of the conversation.

“I also note that because this is a story about surveillance there are a lot of cases in which third persons were present on the line for calls or surreptitiously recording calls. And in cases where I made my own recording, I adhered to legal and ethical standards.”

If that sounds more like a spy novel than a reporter’s chronicle, that was one of the reason’s Farrow decided to write the book.

“As I looked at what became a bible of documentation of what happened every single day over a two-year period I realized there was a coherent story to tell and I didn’t know the conclusion — some of the twists weren’t revealed until 2019 — but I did know what the arc would be.”

A coherent story about how Weinstein and other powerful men could allegedly get away with years of sexual abuse and settlements that included not just NBC’s refusal to air the story (or, as Farrow points out in the book, to report on the Weinstein scandal much at all in the early days after it broke) but also the revelations of agents and double agents working on Weinstein’s behalf.

One of whom, as detailed in “She Said,” Megan Twohey and Jodi Kantor’s chronicle of their Weinstein investigation for the New York Times, was Lisa Bloom. In the early days of his reporting, Farrow called his sister Dylan for aid and insight. Dylan recommended talking with Bloom, who had been supportive of Dylan’s repeated allegations that her (and Farrow’s) father, Woody Allen, had sexually abused her. Farrow confided in Bloom, only to learn that she had been feeding Weinstein information on Farrow’s reporting.

It was a personal blow to both siblings.

“I, who considered Lisa Bloom a staunch advocate for justice and for the voices of survivors of sexual violence and had her as a regular on my program talking about these issues and complicity in the circles of power, and my sister, who had been galvanized by pieces and op-eds written by Lisa Bloom talking about my sister’s credibility, and the culture were shocked,” he said.

“This is deeply unethical behavior, and it is remarkable to me that she is still a member of the California bar.”

But it was the realization that Weinstein had allegedly hired an international private espionage company, Black Cube, to spy on and attempt to intimidate Farrow, McGowan and other reporters and sources that was the real “gut punch.”

Throughout the book, Farrow chronicles his growing suspicion that he was being followed, the email requests that seemed off, the weird weather alerts showing up on his phone and the repeated suggestions that he should arm himself (which led him to a shooting range for target practice, though he would not say whether he had bought a gun), only to find that this was not a case of self-aggrandizing paranoia. He was being followed and tracked and approached by agents of Black Cube.

“It is a very serious point to emphasize that these cloak-and-dagger tactics should stay in the world of [Robert] Ludlum novels and not be directed at real world journalists and sources in our country,” he says. “On a personal level, there were many moments that felt stranger than fiction, and it was only after rigorous investigation that I realized, ‘Holy moly, this is really happening.’

“You can imagine,” he adds with a laugh, “going to your editor, as I did, saying, ‘Hi, there’s a secret Israeli spy group staffed by former Mossad agents after me and my sources; they’re called Black Cube.’ The unanimous reaction was: ‘This can’t be true.’ But it really was, it’s all true.”

Including the Black Cube mole, called Sleeper1973 (which, in the book, Farrow suspects is a reference to his father’s movie of the same name and release date), who supplied him with a document trail of requests and reports.

“At the institutions I am reporting on, whether Black Cube or NBC or the Weinstein Co., there is a significant constituency of really good people who helped me get the story,” he says. And who continue to do so, even as Lack and Lauer deny the accuracy of “Catch and Kill.”

“I’m not going to talk about specific leads coming in, but I will say in general that when I break a story, it leads to a lot of people reaching out with additional corroborative evidence.”

“Catch and Kill,” he says, is designed to be a testament to all the great journalists who “bang their head against these stories and don’t give up” and to the profession of journalism itself, which Farrow characterizes as “precious” and “imperiled.”

Also, he adds, to fact-checkers, especially Sean Lavery, a senior fact-checker at the New Yorker.

“I hope the impact this book is having,” Farrow says, “also serves as a reminder to news outlets that fact checking is really important.”