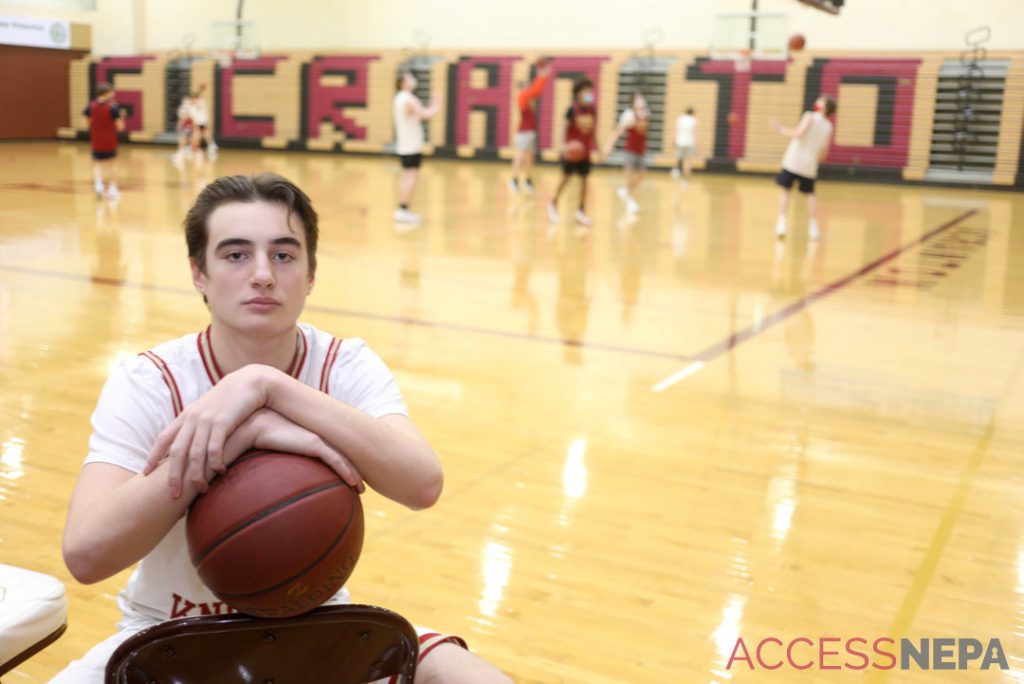 Scranton’s Kevin Lazdowsky ready to take the next step

Kevin Lazdowsky has never shied away from the spotlight on the big stage.

As early as his sophomore season, the unflappable center of the Scranton boys basketball team showed moments never get too big for him. He started in the marquee District 2 Class 6A final that season. He became an impact player as a junior, and his postseason efforts allowed him to develop the leadership role this winter.

Lazdowsky is ready to lead the Knights back to a winning level.

“Kevin has come a long way for us,” Scranton coach Tony Battaglia said. “His JV (junior varsity) years, he played point guard for us. We knew that year, leading into that championship game, he did an amazing job for us. We knew he had ability because we had him playing out of position and he took to it and shined as a point guard. He got better and better and then we put him in a big time position and he did everything he did.

Lazdowsky’s soft outside shooting touch, combined with an aggressiveness in doing the little things in the paint, helped him earn a look in varsity games in his first season. Then, in a District 2-4 Class 6A semifinal game against Williamsport, he scored 12 points and complemented a strong game from Marcus Bauman, as the Knights came away with a 61-60 win. One game later, at Mohegan Sun Arena, Lazdowsky made his first start in the final against highly regarded Hazleton Area and its star, Da’Mir Faison.

“Man, it was a great experience,” said Lazdowsky, who contributed four points in a 48-35 loss. “Going into that game, I wouldn’t say that I was nervous, but it was a lot of pressure because it was my first game starting varsity, but I already had time playing varsity so I was ready. The atmosphere was just insane. It gave me more experience going into my junior year and gave me more confidence in my junior year.”

His success gave the Knights reason for optimism.

Anchored in the middle as a junior, the 6-foot-3 Lazdowsky starred right from the opening game with 12 points against Crestwood, poured in 16 points in a win over Riverside, which played in the PIAA Class 3A playoffs, and added 16 points in a win over Wilkes-Barre Area. Scranton showed its potential with wins over Wyoming Valley West, Pocono Mountain East and Dunmore in the consolation game of the Lynett Tournament. Expectations heightened when the Knights opened Lackawanna League Division I play with a 13-point win over Abington Heights where Lazdowsky scored 20 points.

But, Scranton rode a rollercoaster from there. There were good wins and tough losses, including being swept by city rival West Scranton. The team needed a lift after a three-game losing streak and Lazdowsky led the way with a 21-point night in a win over Scranton Prep.

“I remember one of the first games we played was against Mid Valley,” Lazdowsky said. “That game was very physical for us. It taught us that we needed to be more physical. We weren’t as strong as we thought we were going to be, we weren’t as good as we thought we were going to be. That put things into perspective. We had a couple of up and down games. In the first game against Prep we got blown out, lost by I think around 20. In the second game, we had a really good game and a really good start to the game. Then, we came out at halftime and last year when we came out at halftime, it wasn’t our best. So that second game against Prep really put things back into perspective that we could be one of the best teams in the area.” 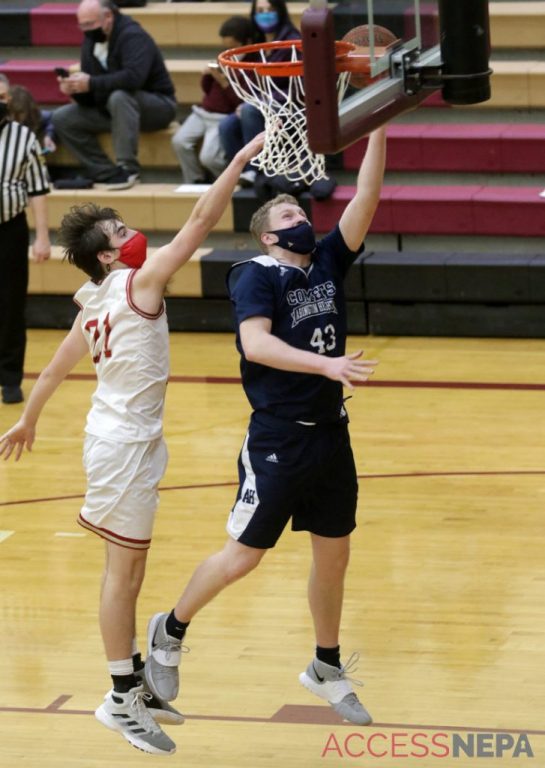 In the opening round of the District 2-4 Class 6A playoffs, Scranton avenged a regular-season loss to Delaware Valley as Lazdowsky scored 14 points. The win earned the Knights a rematch with top-seeded Hazleton Area in the semifinals. Lazdowsky led the way as the Knights went toe-to-toe with the Cougars, who held an eight-point lead in the fourth quarter. Lazdowsky ran off six straight points as Scranton closed to within 50-49. He drew a foul, stepped to the line and calmly swished a pair of free throws to complete the comeback in a 51-50 win, finishing with 19 points.

He couldn’t, however, carry that momentum into the final where the Knights lost to Wilkes-Barre Area, 62-45.

That disappointing finish to the season motivated Lazdowsky, who was selected to the Lackawanna League Division I Coaches’ all-star team. He worked on his strength and agility and is eager to see what this team can achieve in his senior year.

“We have a pretty young team again,” Lazdowsky, 17, said. “We have a lot of seniors, but we have pretty good young players including my brother Dillon, Jason Shields and Arvel Chandler. I just try to be a leader, help them as much as I can and just contribute to this team whatever I need to do.”

After the coronavirus pandemic delayed the start to the season, Lazdowsky provided energy once practice started. Teammates John Rose and Shields, who have been with him since his elementary school days, are ready to have a more consistent season. They have put in the work and are focused at practice.

If the Knights can stay steady with their standout efforts, they expect to have a memorable run.

“Things started for us in fifth grade,” Lazdowsky said. “We did really well that year. That was when I really started to love playing basketball. We have to come to work every day, come to practice every day with the mentality of we are going to give 100% and do the best we can in practice to come out in the games and win every game.

“That’s what we are trying to do. We have really high expectations for this team.”