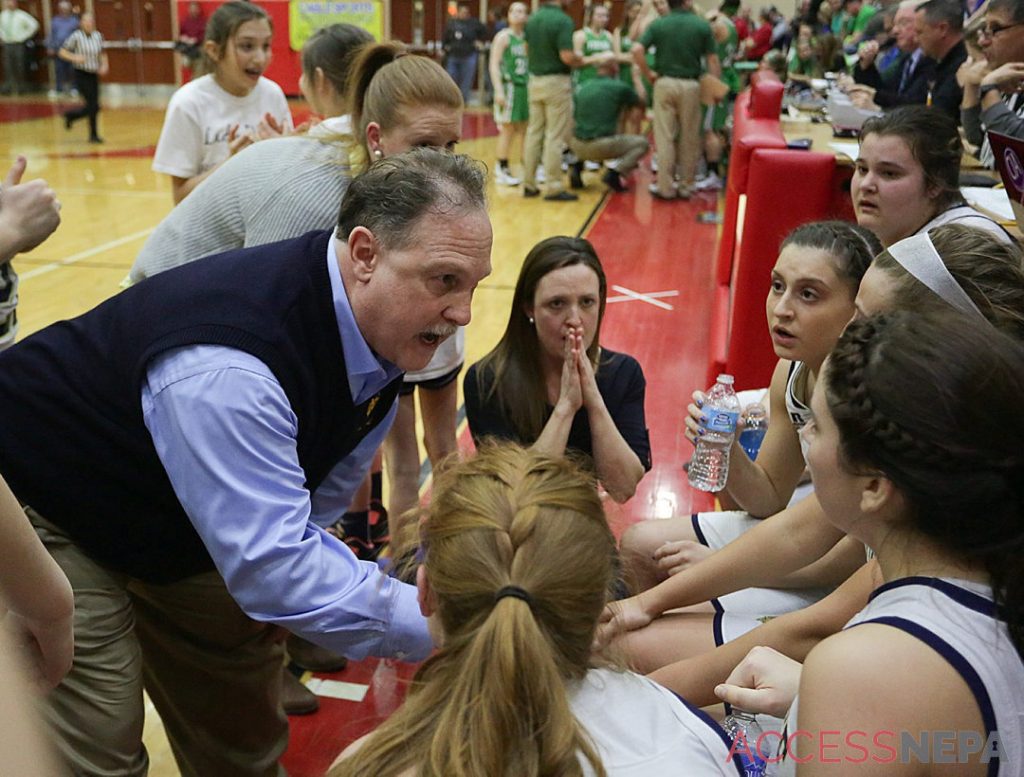 ‘Back the Stack’ event set as coach starts fight with cancer

t could go down as the worst start to a state basketball semifinal.

Could have been the right time to say, “Great season, girls. Just not our night.”

Stack, as he’s affectionately known around Old Forge, didn’t consider giving up, backing down, or caving to an opponent. Now, the 61-year old former Associated Press Pennsylvania Coach of the Year could use some help of his own with the fiercest opponent he’s ever faced. Three weeks ago, Stack was diagnosed with esophageal cancer, and the people who love him have stepped up with a fundraiser, slated in two weeks at Revello’s Pizza, which is basically next door to Stacchiotti’s house.

The “We Back Stack” event is Oct. 4 from 11 a.m. to 6 p.m. with a cornhole tournament run by NEPA Cornhole; a raffle for three fabulous prizes; a T-shirt sale, and a par-baked pizza and porketta sale. Sponsorships are also available for the cornhole tournament, which will have divisions for advanced players and rookies, which probably includes all of you who are undefeated in your backyard. More detailed information is available on Facebook at The Stack Pack page.

Didn’t know this before Old Forge softball coach Pat Revello and Old Forge High School principal Chris Gatto told me, but Stack has coached Little League and basketball in Old Forge for 40 years. Now, there are many people whose lives Stack has touched who are asking you to help in his battle.

“We’re always going to be there to back him up, just like he backed us up,” said Kelci Yesnowski, who was a senior on that 2015 team. “Deep down, he is the most kindhearted person and would be there in an instant for anyone. To anybody who says, he comes off, in his ways, for his reactions the way that they are, it’s just him. It’s just the way he responds in an athletic situation. It almost motivates you more when you’re on the court.

“I just remember in the locker room against Portage, he kept telling us, ‘It’s not over. It’s not over.’ As many times as we’ve been down in a game, he knew we could persevere after halftime. He pushed us to play our best game. He was never discouraging.”

Treatment of his cancer hasn’t begun yet. In fact, it’s only been about three weeks since he was diagnosed.

“We’ve been next-door neighbors for, I can’t tell you how long,” Revello said. “I saw his car home one day and I texted his boss and asked if there was any reason why Ronnie wasn’t at work.”

His boss texted Revello with the news and it didn’t take long to get the ball rolling through a group text and the Facebook page put together by borough councilman Rick Notari.

“He just means so much to so many people in our town,” Revello said. “He’s Old Forge athletics’ biggest fan. I don’t know if there is anybody that is in their 40s or under that were never coached by him in Old Forge at one time or another, be it basketball, baseball, all-stars, something. He’s touched so many lives in our town through sports. He’s been dedicated through all that.

“He’s Stack. There’s one Stack that does it his way and he sticks by his guns, and that’s fine by everybody.”

That means he never quit on his kids. Now, it will be Old Forge’s turn to return the favor.

Revello called it an overwhelming response thus far. Gatto wasn’t sure there were words that would equate with Stacchiotti’s value.

“What Stack really means to this community, words really can’t describe it,” Gatto said. “He’s been involved with youth sports for the better part of 40 years. He was intimately involved in Little League, he served in leadership positions with Old Forge Little League throughout the years. Youth basketball, St. Mary’s basketball, he even was an assistant coach down at Seton Catholic for a while.”

He’s been involved in girls basketball at Old Forge for 22 years, the last six seasons a head coach.

“He has given so much to the community and to the youth, without having kids of his own, which is unheard of,” Gatto said.

Some people would say he’s determined. Others describe it another way.

“He’s very passionate and I’ll give you an example of that,” Gatto said. “He was on the school board for several years and it was during our contract impasse, and this is when I was still a teacher. We actually got into a heated back-and-forth at a public meeting. He’s family to me, but he’s passionate. Once he has something in his head, he’s going to be passionate about it. He’s somebody you want on your side. You don’t want to be going against him.”

Maybe cancer doesn’t know the fight it’s in for.

“As terrible as it is that he has this disease, that’s one thing that I’m pretty sure anybody you talk to is going to say, he’s not a quitter, and he’s not going to quit in this fight either,” Gatto said.