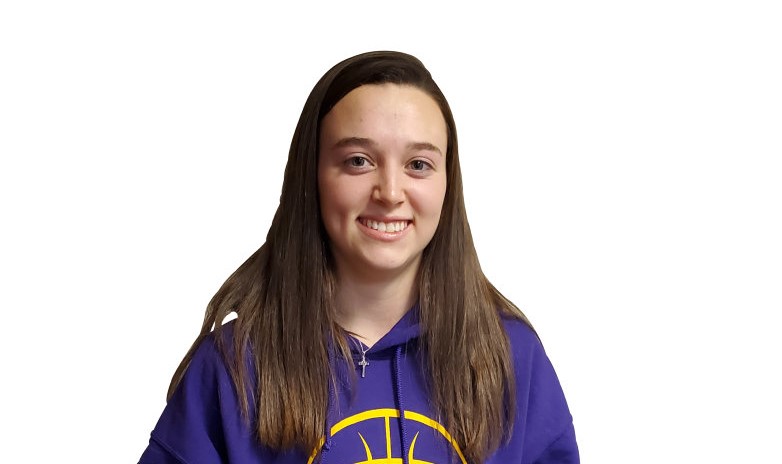 In wins over Wyoming Valley West, Old Forge and Williamsport, the junior guard scored 68 points, 16 in the third quarter against Old Forge to snap a tie. She scored 29, one off a career high, against Williamsport, and had a combined 19 assists, 16 rebounds and 11 steals in the wins. You don’t have a true post player, but that hasn’t been a problem so far. Why not? People view us as small and they see it as a disadvantage. I think it’s an advantage because we’re faster than most teams. Cecelia Collins grew a ton and she now has an inside and outside game, so I think we’re going to be fine with being small.

Are you at all surprised by the way you have defended people (28 ppg)?

It’s not surprising to me because we worked so hard on hit this summer. Personally, I definitely needed to get better defensively, and playing AAU basketball, that got me better. We’re all working really hard and working together and we’re stopping people.

What teammate has surprised you most this season?

Maria Belardi definitely. She’s in control of her game, her shot is looking really good and she’s playing a lot better defense.

What do you need to do to be successful going forward?

I think we need to clean up some things on the defensive end. I think boxing out is a big thing, helping the helper and offensively, we have to execute better.

You’ve won the last two district titles in Class 4A. What are this year’s goals?

District and league I want to win, and I haven’t won the Lynett Tournament, so that’s a big goal of mine. I set my goals really high, so I’m thinking of a state championship.

Speaking of the Lynett Tournament, you open with Holy Cross on Friday at 1 p.m.

Holy Cross has some good players, I think they are well coached and I think we want to take it one game at a time. I’ve played in the consolation bracket twice and I don’t want to do that again, and I want to win it.

Who has been the biggest influence on you athletically?

My dad’s taught me everything I know offensively and defensively. He pushes me every single day. He lets me know what I do wrong and how I could be better. And we watch film together on other teams and see what we can do. He’s like a coach to me.

Other sport you play?

I have to have a mini blue Gatorade before every game, and I listen to a couple different songs and dance around my house.

What are the songs?

Waka Waka by Shakira and Live Your Life (by T.I. and Rihanna).

I met Breanna Stewart. I met her at Penn State when UConn was playing them and my aunt (former UConn player Missy Rose McTiernan) took me to the locker room and we got to meet Geno Auriemma and Breanna Stewart.

Give me a skill you would like to master?

I think leadership is big for me. I think I have to step up more and be a leader and role model for younger kids.

Probably Maggie Mills. We are so close we always make each other laugh. She dances for us. I think she’s just funny.

What’s the biggest thrill you’ve had in sports?

I think my freshman year, our run in the state tournament was the most fun I’ve had in basketball. We got along so well and we shocked a lot of people that year.

Have you started thinking about what lies ahead for you after high school, both athletically and academically?

I definitely want basketball in my future. I have no idea where I want to go, but I want to stick with basketball, whether that’s coaching or some kind of athletic training after.

One meal your mom makes that you don’t know if you can live without.