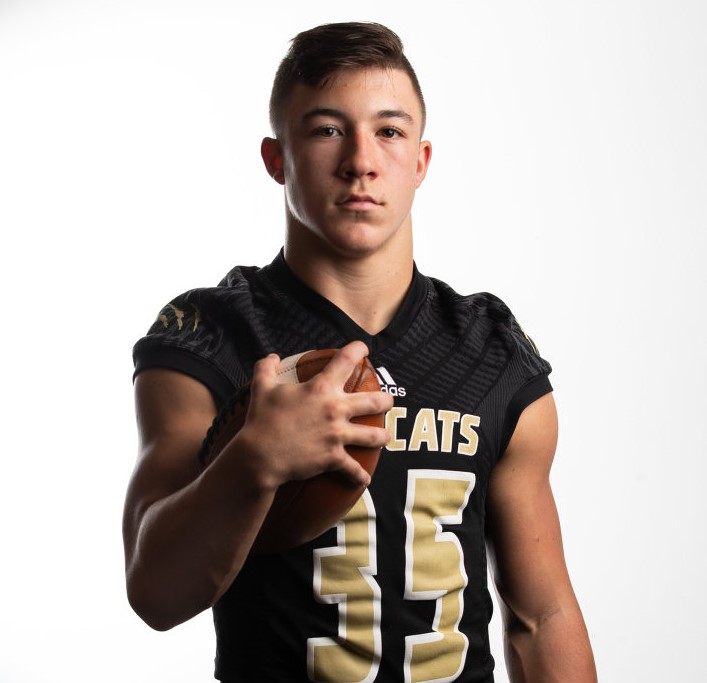 The Western Wayne junior ran for 247 yards and three touchdowns on 30 carries as the Wildcats beat Dunmore for the first time in their history. Here’s more from his Athlete of the Week interview.

What is it about those guys that you like? Hard work and they give a lot of credit to their teammates. Just hard workers. That’s what I like about them.

Three people you’d like to have dinner with: Those three athletes.

Favorite food: Tough one — going to have to go with sushi.

What’s the feeling like when you’re playing a team the program has never beaten? It’s pretty crazy. The adversity coming into the game, we knew it was a huge game and that’s what motivated us this week to have a great week of practice. Our coaches really prepare us great every week. Our team really stepped up to the adversity of the game. The line blocked great. The fullback, Adam Silfies, every week, day in and day out, great. Quarterback threw the ball well.

What’s it like when you finally do beat them? Just feels like all that hard work over the summer paid off and that we can do anything we put our minds to. If we work hard, we can do it. That’s what really made us motivated.

Do you know how many touchdowns you have this year? 25.

Do you have a favorite touchdown from this season? I’m going to have to say either the run against Honesdale, my fifth one, I broke it to the outside and two kids converged on me and I split through them and just ran up the sideline. Or probably, even though it was short, the 2-yard run to put us up by one against Dunmore last week. It really gave us that momentum. Or, there was one more that was pretty good: the run against West, the first touchdown that got me over 1,000 (yards). That was one of my favorites.

That Dunmore game was back and forth for a while. Was that nerve-wracking? Oh yeah. When Ezra Tetreault caught that pick — they were driving, they were driving, they were driving after the big fumble they recovered. We just, I don’t know, we kicked into another gear and we knew that we had to do something there or it was going to be tough. So, we had that interception, he returned it all the way down to the 3. I knew that was the momentum we needed. We ended up sealing the game. I had that touchdown run and then we stopped them. Derek Mason had the interception and then Caleb Brungard broke that 71-yard run or whatever and then Matt Valanda, we pushed him in for the score to put us up by two. Felt really good. That’s what we needed.

You mentioned Derek Mason. It’s nice that you guys have a former NFL player on your team. That’s why he picked No. 84, too.

Does he even like Derek Mason? Or is he just forced into it? I think he’s forced into it. I remember he said that to me in like kindergarten. He was in first grade. I was like, ‘Derek Mason?’ He was like, ‘Yeah, do you know the former football player?’ I was like, ‘No,’ because I wasn’t big into football back then. … We all go to wings together every Wednesday night. It all started before the Lake-Lehman game and we realized last year’s team didn’t have as much chemistry as we have this year. We just jell together really well. We’re always on each other, get better. That’s what’s great about this year’s football team. I love playing with them week in, week out.

You said you weren’t interested in football. How did that change? Well, I used to play soccer. I’d get fouls for rolling into kids. It was the last game of the season. I just didn’t want to play anymore. I asked my dad, ‘Can I play football?’ And he said, without hesitation, ‘Yeah.’ It was the best decision he’s ever made, I think. … I was playing soccer previously and it wasn’t for me. I just had that knack for football, and I also played fall baseball. That kind of held me back from football, but then fifth grade, I started playing football. Football’s a lot different than every other sport and I love it. That feeling of the Friday night lights and the camaraderie and seeing all those people in the stands, it just has a different feeling than any other sport that there is. Other than a Western Wayne basketball game; gym’s packed, student section going crazy. Football just has that different feeling.

Do you play other sports? Yeah, I play basketball and baseball.

Do you have any hobbies outside of football? I like to hunt. I like to just hang out with my friends, do stuff outside of school with them, hunt with them, fish with them, bonfires with them. There’s nothing like Western Wayne. Western Wayne has that pride where if we mess up, nobody gets on you about it. Whether you win or lose, they’ve always got your back. The feeling of the community, the small-town feel — there’s nothing like it. You’ve known your friends since kindergarten.

Is he better than you? He might be. That’s what everybody’s telling me. He’s bigger than me. He’s like 6-1.

You could probably still take him though, right? Oh yeah. Got that big-brother edge.

You a Netflix or movies kind of guy? I like Netflix. I like “QB1.” Love the movie “Friday Night Lights” and “Remember the Titans.” What other series — Oh, “American Horror Story,” great show. … Not a big “Office” guy. I don’t really like it. The dry comedy is not my thing. But “QB1,” I watched it before football. The feeling of seeing those Friday night lights, being that big-time guy, I like that show a lot.

Where’s the name Zane come from? Zane Grey. He’s the Western writer, fisherman. They (my parents) came up with it. They always liked it.

What’s the best way someone has tried to pronounce your name? Last name? Wan-eh-jes-ki. It was in second grade in my school, because they would always announce the birthdays. “Zane Wan-eh-jes-ki.” I was like, “How does that come up?”

Do you have a favorite move as a running back? Running people over. That’s my favorite. Letting them know about it.

Which you could not do in soccer. No, you can’t do that in soccer.

Do you feel like any skills translated from the soccer field to the other football field? Speed. Soccer helps with speed. I was never really fast when I was younger-younger. And then once I got on the soccer field, (you) open that stride up. And then get on the football field, you get that ball, you see open space, you just hit it.

If you could add somebody to your team from the Lackawanna Football Conference, who would it be? Man, that’s tough. Those Valley View kids … I’m trying to think. It’s tough. There’s so many good kids. Oh, (Delaware Valley’s) Jason Henderson. That’s my guy.