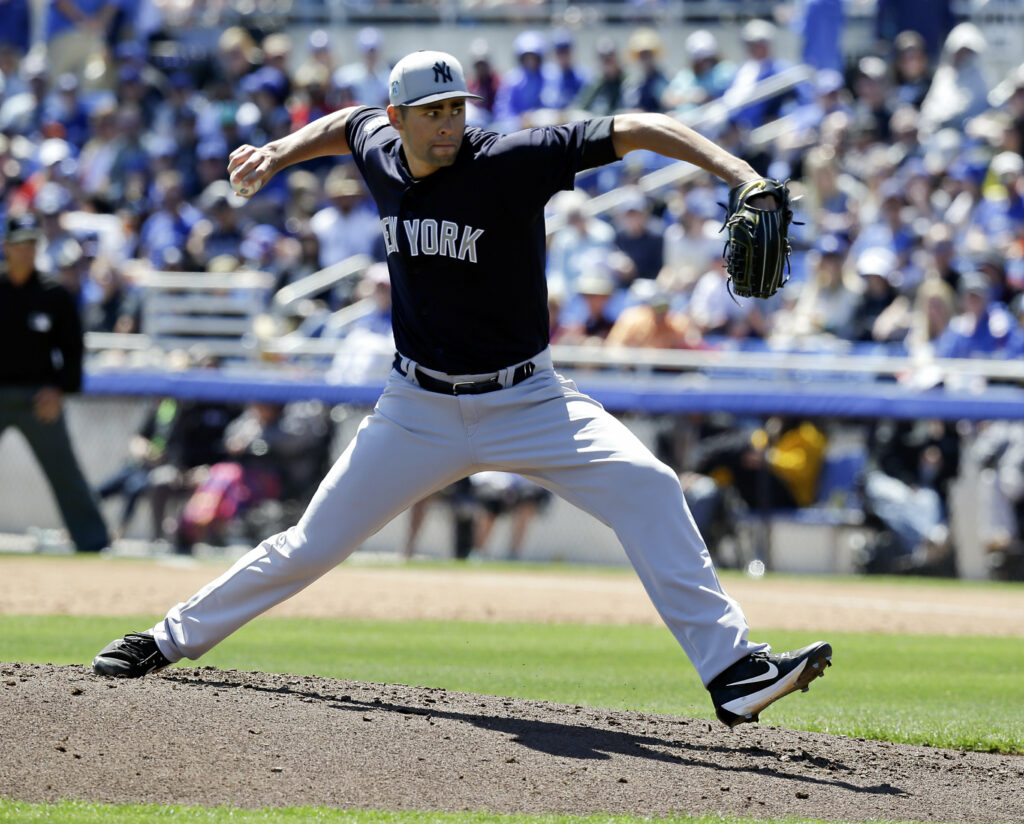 Ben Heller would rather be pitching, but considering where he’s coming from, hearing he had only a minor flexor strain was about as good news as he could’ve expected.

“When I was laying in that MRI tube, all I could think about was what if tore this thing again?” said Heller, who is coming back from Tommy John surgery. “It’s a s scary thought because it’s been a long road to get back here, so I can’t imagine going through it all again.”

Heller will see the doctor again Wednesday, when he hopes to be cleared to resume his rehab.

It was after his outing against Pawtucket on July 3 that Heller said he began to feel some tightness. They rehabbed it as the RailRiders went into the all-start break, so Heller had some built in days of rest. It felt better before his next game, July 14 in Syracuse, and he showed no ill effects in tossing a perfect inning with two strikeouts on just nine pitches. After that game, however, the pain came back.

”So I was like, probably should go see the doctor and figure out what’s going on,” Heller said Saturday. “So, thankfully, just a forearm strain. I think as far as injuries, that was probably the most minor thing that it could have been, so I’m thankful about that.”

If cleared Wednesday, Heller expects to build up for a week and a half to two weeks.

”Looking at maybe back in games, hopefully, in like two and a half weeks-ish,” he said.

After posting a 9.90 ERA in five April games, Raynel Espinal returned to the 2018 form that made him one of the more reliable arms for the RailRiders. Once he moved into the rotation, he put up a 3.96 ERA in May, shaved it to 3.54 in June, then was off to a 2.25 ERA in July.

Now, his season is over.

“He did a fantastic job for us this year,” Bell said. “He was really extraordinary. I was really impressed with what he accomplished.”

The RailRiders now have RHP Chance Adams, RHP Deivi Garcia, RHP Brody Koerner and LHP Daniel Camarena in the starting rotation, with LHP Nestor Cortes Jr. a likely possibility to join them. As of Sunday afternoon, Bell said he didn’t yet know the exact plan for Cortes. Bell has said the RailRiders would like to get to a six-man rotation.

In addition to Espinal, they lost RHP Randall Delgado to the injured list July 18.

”I’m not positive exactly what happened, other that he was feeling a little tenderness and that kind of stuff and I think he could be shut down for a little bit. And so we’ll see what happens,” Bell said.

Defense in the details

Outfileder Clint Frazier and RailRiders defensive coach Julio Borbón were out working one-on-one prior to Sunday’s game against Louisville. They’ve done this type of drill before, with Borbón almost serving as a quarterback for Frazier. Sunday’s time around came with a twist: Frazier wasn’t wearing a glove.

It’s just Clint and Julio down by the … left-field line, working on defense before this afternoon’s game. pic.twitter.com/spnqJZt3bG

Frazier has looked far more comfortable in left field recently. Don’t discount the relationship he’s built with Borbón. Here’s an excerpt from a recent story on the teacher and student:

“A lot of the stuff that Clint is going through and has gone through, I literally went through, exactly the same way,” Borbón said.

“I was put in the same scenario, where I was in the big leagues and I still needed work in the outfield. It was something that — I was behind my offensive game. I worked day in and day out with our outfield coach.”

The two work one-on-one before games. Before a day game in Lehigh Valley, the drills focus on Frazier’s first step, breaking left and right as Borbón flips him balls from about 10 feet away. They work on how Frazier drifts back on balls, with Borbón turning into a de facto quarterback and lobbing him passes. Back home at PNC Field, Borbón stands in the batter’s box and hits balls toward Frazier in left field. They work on drills Borbón says Frazier brought down from Yankees outfield instructor Reggie Willits.

Most of the time, however, it seems like they’re just talking.

“Sometimes words carry over more for me than a drill,” Frazier said. “Sometimes I’m looking for a key word, because the biggest thing with me this year is I’ve never had spurts in the outfield like I did this year. So, when it comes to trying to revert back to like ‘What do I need to do to get better?’ I was kind of struggling to find that.

“Outfield is not as hard as I made it out to be, but obviously with some things that I might mechanically be doing wrong to allow the ball to speed up on me out there, sometimes just talking with him helps.”

Here's the play Clint made at the wall. https://t.co/QpDWgXjr3r

The RailRiders begin a six-game road trip Tuesday, and there’s a chance they return to PNC Field with some franchise history.

Mike Ford with an absolute moonshot for home run No. 20 of the season. pic.twitter.com/yFZyG4F9u0

Ford’s next home run will tie the franchise record for more by a lefty hitter, which Eric Valent set in 2001. Jorge Vazquez holds the overall individual record with his 32 in 2011.

One more for the books: When Zack Zehner hit a grand slam against Louisville on Friday, it was the RailRiders’ sixth of the season, setting a franchise mark. Billy Fleming (April 15 vs. Lehigh Valley), Amburgey (April 29 vs. Rochester), Higashioka (May 5 at Syracuse), Valera (May 24 at Syracuse) and Ford (June 9 vs. Syracuse) had the others. Two other SWB teams had five grand slams in a season, last done in 2005.