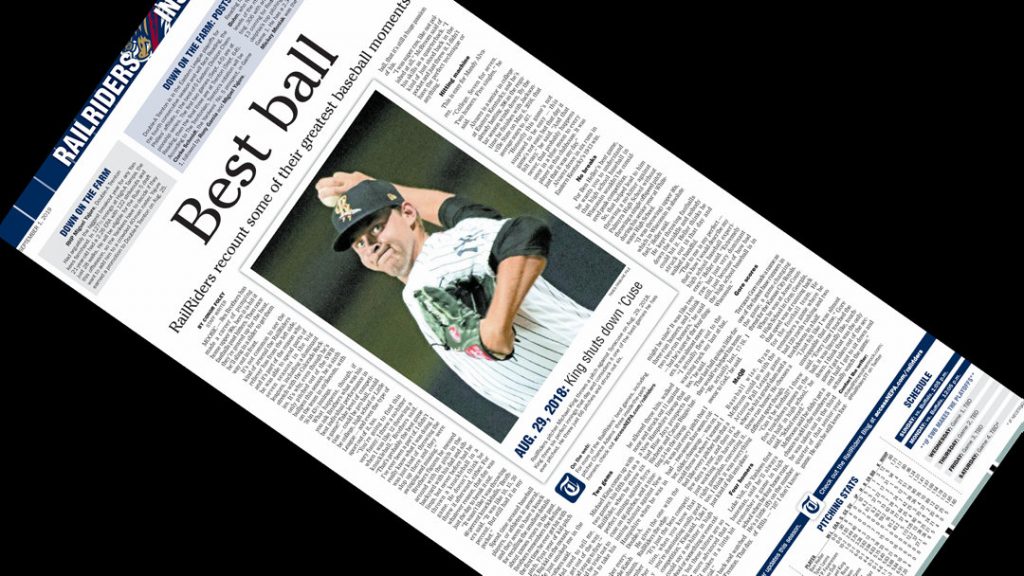 More of the RailRiders’ best games

Continuing the them of today’s RailRiders Insider feature, here are more of what members of the RailRiders say were their best games. You can read that story here. As a refresher, players could pick a game from any level — Little League to pro ball — and could even pick a sport other than baseball if they wanted to.

Bell cautions his answer with the disclaimer that it’s been a while since he played in a game. He had a lot of memorable ones, but there was a series in 1999 that stands out. As he tells it, Bell and Houston’s Craig Biggio were neck and neck in the fan voting for the All-Star Game, which was being held at Fenway Park that season. Biggio and the Astros were coming to Arizona to face Bell and the Diamondbacks in a three-game series with a week to go before the break.

“I don’t remember exactly what it was, but the series — I had a really good series,” he said.

Here’s what happened. … The Diamondbacks took two of the three games, winning the third on a walk-off single by Matt Williams in the 11th inning. Bell had a game-tying double two batters before that scored Tony Womack. Bell finished the series 9 for 14 with a home run (off Jose Lima), five doubles, five RBIs, four runs and a stolen base. Biggio was good, too. He went 9 for 15 with two homers, four doubles, three RBIs and five runs, though he also committed an error.

“But it was kind of a head-to-head between me and Craig and both of us deserved the fan vote,” he said. “We both were playing really well. I don’t remember what I did in that series at all. Whatever it was, it was pretty good.”

Bell would get the start in the All-Star Game.

Three games stand out for Lail, with his major league debut taking the top spot.

You have to go back to when he was 12 for another. Lail and his travel ball team from Utah were playing in a tournament in Cooperstown, New York, on a trip that included a visit to the Baseball Hall of Fame.

“It was against a Florida team,” he said. “I hit a walkoff home run and it was something that was just nuts because a team from Utah was actually doing well in a travel ball tournament, especially in Cooperstown, New York.”

Just for good measure, Lail also mentions a football game. He says he was OK as a quarterback, but he was surrounded by talent, as his high school fed the University of Utah and BYU programs.

“My senior year of football when we beat our rivals in the last like 35 seconds,” he said. “I threw a touchdown pass to one of my good friends and celebrated that.”

Katoh goes with a classic baseball accomplishment: the cycle. Katoh remembers a game in high school when he and his team’s leadoff batter each accomplished the feat.

Katoh said he had six hits, but also remembers making an out. .

“Someone had to get out, or else the game would’ve never ended,” he joked.

“I’m not trying to sound cocky,” Adams begins, “but when I was younger, I had a lot of good games.”

He picks one where he hit three home runs in a game. All three were inside-the-parkers.

“The coach kept moving the left fielder back and I kept hitting it over the kid’s head every single time,” he said. “Because it was one of those old fields where the fences were really (far back).”

Earlier this season, when a injury to Gary Sanchez in New York meant an in-game promotion for Kyle Higashioka, the RailRiders had to pull the designated hitter, leaving the pitchers to bat in the lineup. That meant at at-bat for Adams, but he was under instructions not to swing.

“Yeah, I miss hitting, he said. “It’s fun because when you get a good hit or something, all the guys are there when you come in. Big team thing. Makes you feel like you did something, whereas pitchers, you’re just kind of mainly focused on getting zeroes.”

Rijo went with baseball, though he wasn’t physically playing in a game. He and Double-A pitching prospect Albert Abreu were locked in an MLB the Show duel. Rijo’s Washington Nationals and Abreu’s Houston Astros played into the 14th inning, and Rijo had Ryan Zimmerman at the plate.