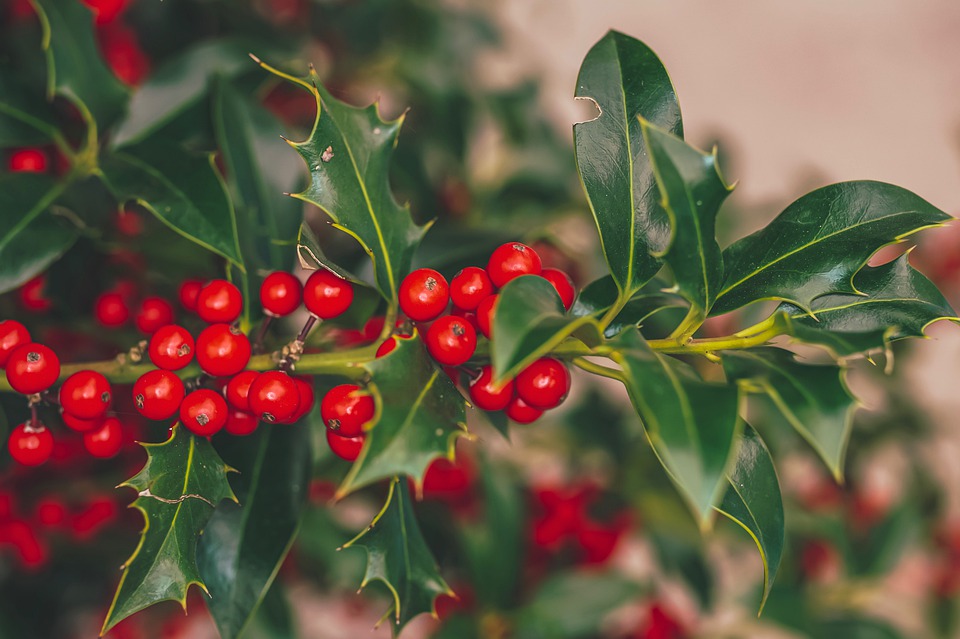 ‘Tis the season for holly and its symbolism

Readers who have visited the Pinelands (aka Pine Barrens) of South Jersey know that holly is commonplace.  The plant is also found in the coastal plain of Maryland and Delaware.  Here in the Ridge and Valley section of NEPA it is an uncommon treat and always puts people in the holiday spirit with its evergreen nature and eye-catching leaf.

Holly can be found in a good portion of our landscape that is dominated by the maple-beech-birch forest type with a smattering of oak-hickory and oak-pine in the overall mix.  A forest type is a community of many plant and animal species along with fungi, bacteria and other microorganisms interacting in complex ways with each other and their physical environment. Forest plant communities are, by definition, dominated by one or more tree species.

Northern hardwoods is the forest type name for the woodlands indicative to our region.  Along with trees one would find shrubs such as rhododendron and mountain holly.  Stands of northern hardwoods cover about 41% of the Commonwealth, occurring in the cooler northern counties and at higher elevations along the Allegheny plateau. The northern hardwoods community tolerates cooler and moister conditions than the oak/hickory type but there is considerable mixing of the two in some areas especially in the more southern reaches of NEPA.

According to Penn State Cooperative Extension, holly is a broadleaf evergreen that can be used in the landscape as a small tree or large shrub, depending on the specific design. A holly can grow 15 to 20 feet high and spread from 6 to 10 feet wide, if unpruned. Young plants tend to be pyramidal and dense, with branches to the ground. With age it becomes more open, rather irregular, and high branched.

The coarse-textured foliage is quite broad and elliptic, about 1 inch wide and 2 to 4 inches long, with scattered spiny teeth along the margin. The leaves are dull green on top with a lighter green below. Both the male and female plants produce a green flower of little ornamental value. Fruit on the females is bright red, spherical, and small.

Since this is the holiday season, our thoughts turn to holly as an evergreen and its symbolism.  A favorite song “Deck the halls with boughs of holly…” connects us to this plant at this time of year.  But, the main question is “why?”

Here is the folkore that explains more about this beautiful plant.

To avoid persecution during the Roman Pagan festival of Saturnalis, the early Christians decked their homes with Saturnalia holly.  It was the sacred plant of Saturn and was used at the Roman Saturnalia festival to honor him. Romans gave one another holly wreaths that featured decorating images of Saturn with it and carried them around.

Centuries later, in December, while other Romans continued their Pagan worship, Christians celebrated the birth of Jesus. To avoid persecution, they decked their homes with Saturnalia holly. As Christian numbers increased and their customs prevailed, holly lost its Pagan association and became a symbol of Christmas.

The Druids believed that holly, with its shiny leaves and red berries stayed green to keep the Earth beautiful when the sacred oak lost it leaves. They wore sprigs of holly in their hair when they went into the forest to watch their priests cut the sacred mistletoe.

By this time, holly had come to stand for peace and joy.  People often settled arguments under a holly tree. Holly is believed to frighten off witches and protect the home from thunder and lightning.

In West England it is said sprigs of holly around a young girl’s bed on Christmas Eve are supposed to keep away mischievous little goblins. In Germany, a piece that has been used in church decorations is regarded as a charm against lightning. In England, British farmers put sprigs of holly on their beehives.  On the first Christmas, the British farmers believed, the bees hummed in honor of the Christ Child.

The English also mentioned the “he holly and the she holly” as being the determining factor in who will rule the household in the following year, the “she holly” having smooth leaves and the “he holly” having prickly ones. Other beliefs included putting a sprig of holly on the bedpost to bring sweet dreams and making a tonic from holly to cure a cough. All of these references give light to “decking the halls with boughs of holly.”

It sure is an interesting and beautiful plant and awesome to know that it can be found in our neck of the woods.  Evergreens are symbolic in so many ways and holly’s story ranks up there as an important one to tell.

NATURE NUGGET:  Some birds just start early. Really early! Breeding season has begun for a few species, even with a snowy landscape and frigid temperatures. Those deep “Morse code-type” hoots of great- horned owls echoing in the landscape are all about courtship and pair bonding. The deep hoots are the males and the slightly higher pitched hoots are the larger females. Another male Great-Horned Owl might hoot back in exchange. Great horned owls start up the breeding season as early as December. Barred owls start announcing themselves with their deep “who cooks for you” hoots a few weeks later and are breeding by mid-January.