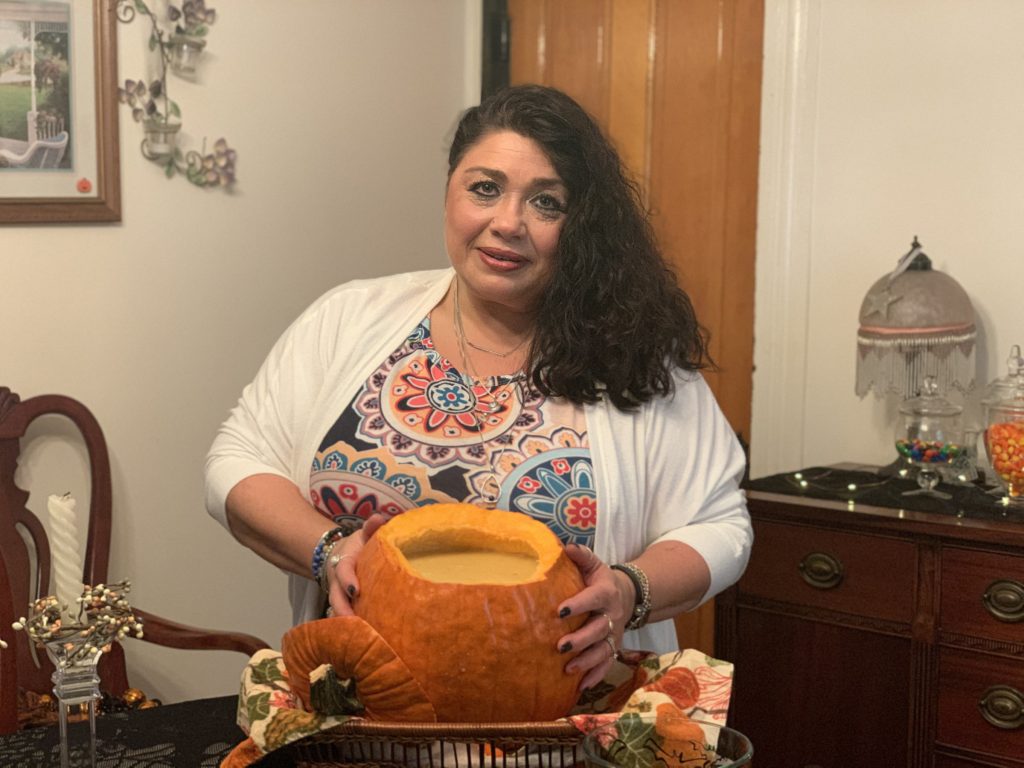 The Dunmore resident has a serious DIY spirit in every aspect of her life. Where she really lets her imagination run wild, however, is in the kitchen.

Brown’s Summer Surprise Cake, which was featured in Local Flavor a few years ago, consisted of a watermelon shaped into the likeness of a cake and covered in homemade frosting. This fall, say hello to Brown’s Pumpkin Soup, a family recipe handed down and served in a hollowed out pumpkin.

“I love to go all out with (food,)” Brown said during a recent afternoon. “Plus this is my favorite time of year.”

The soup — which earned Brown a $50 grocery gift card from Riccardo’s Market, 1219 Wheeler Ave., Dunmore — was her late Aunt Tessie’s recipe, which Brown inherited 30 years ago shortly after she married her husband, Spencer. It’s the most requested holiday menu item from family, Brown said, and she will typically make big batches of it during October and November.

“I love to bring it to Thanksgiving,” she said. “Everyone’s always asking for it and they know if it’s fall, I’m making Pumpkin Soup.”

The recipe is easy, Brown said, and the most tedious part is cleaning out the pumpkin. Cooks should make sure the sour cream is thoroughly mixed in, otherwise it can get lumpy, Brown said. Brown also made some of her own adjustments to the soup, including adding vegetables such as potatoes and carrots as well as adding pink Himalayan salt.

Something Brown made sure to keep in the soup were the homemade dumplings. Brown said her two sons, Zachary and Jacob, love the soup but that for years, her daughter, Marlana, only ate the dumplings. Marlana recently tried the broth and couldn’t get enough, Brown said.

“It’s a good soup and perfect this time of year,” Brown added.

Brown’s Pumpkin Soup was an ideal autumn dinner. The pumpkin flavor was complemented by the cool sour cream and the consistency was perfect thanks to the addition of the veggies. The dumplings were soft and gave the soup a heartiness. Brown also topped the soup with toasted pumpkin seeds made with olive oil, a little salt and a barbecue dry rub.

“We just love pumpkin seeds in this house,” she said. “Some people can use croutons, but we love the way the seeds taste.”

Family has a lot to do with Brown’s love of cooking, and she still makes recipes she got from her mother, the late Mary Cantafio. Still though, Brown is a crafter at heart and loves to see what she can create with ingredients she has on hand. Some of her most delicious recipes came from a spur-of-the-moment cooking session.

“My husband always tells me I can make something out of nothing,” she said. “I’m the happiest when I’m busy and doing something creative.”

Cut, seed, peel and grate entire pumpkin in food processor. Put grated pumpkin in pot and add cold water, enough to cover about 2 inches above pumpkin. Add onion, salt, paprika, bouillon cubes, carrots and potatoes. Bring to a boil. Then, lower heat and cook for about 45 minutes to an hour (or longer if necessary). In separate bowl, mix sour cream, milk and flour and whisk until smooth and creamy. (May need to add more milk or water if too thick.) Add mixture to soup and stir continuously to incorporate throughout.

Mix all together until smooth. (May need more milk or water if it’s too thick.) Make dumplings by dropping small amounts off of a spoon into boiling water. Let boil for about 8 minutes. Drain and rinse in cold water. Then, add to soup.