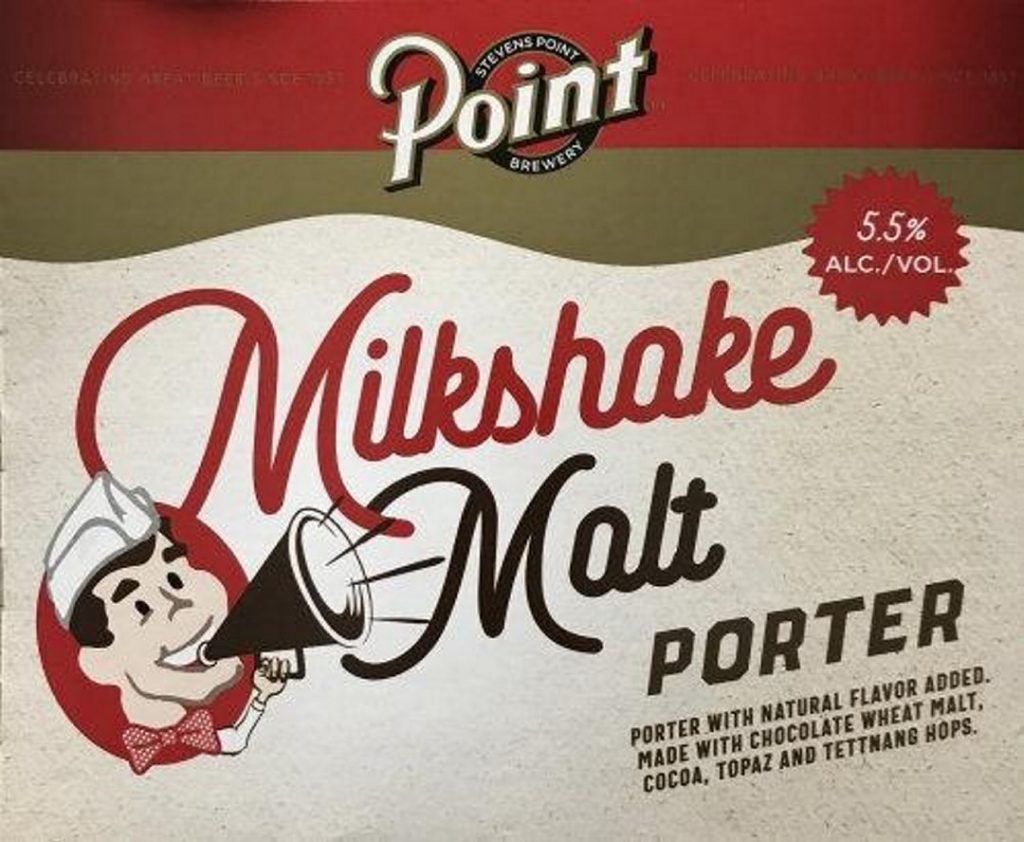 With summer fast approaching, I looked for something to capture the spirit of the summers I had as a child. This was back when we’d run around outside all day until the streetlights came on, drank from the hose, ate berries straight off of the bush — you know, “the good ol’ days.”

One of my favorite things about summer from back in the day was the special trip to get a milkshake. I remember loving a good, old-fashioned chocolate milkshake in a glass with a red and white striped straw. So I went hunting in my local beer distributor to find something that would capture the spirit of my childhood but in beverages I can enjoy responsibly as an adult. I found a bottle with a label that looked like it came straight out of an old-fashioned malt shop, including a man wearing a little white paper hat: Stevens Point Brewery Milkshake Malt.

The brewery in Stevens Point, Wisconsin, was founded in 1857 and prides itself on supplying Union troops with beer during the Civil War. It shifted production to soft drinks and near-beers during Prohibition and survived both that era and the Great Depression. It continued to innovate and change throughout the 20th century, and in 1973, the beer was rated the best American beer in a taste test.

In 1990, the brewery expanded its distribution of Point Special Lager outside Wisconsin for the first time. Barton Beers of Chicago bought the brewery two years later, and in 1994, it increased the brewing production capacity by 40% after expanding the facilities. In 1997, a 15,000-square-foot warehouse was built to house finished beverages and to streamline the shipping process. It changed hands again in 2002, when a Wisconsin-based soda company purchased the brewery, making it once again Wisconsin-owned. The production line was expanded to include a gourmet root beer.

Point Special Lager won the gold medal at the 2003 Great American Beer Festival, beating out both Miller and Budweiser. The following year, the brewery expanded distribution throughout the Northwestern United States. In 2005, Stevens Point added three new gourmet soda flavors to the lineup and then expanded production to include craft brews and seasonal brews three years later. Another expansion of its product line followed in 2010, followed by the addition of hard ciders in 2012. In 2014, it added new tanks and equipment to increase its cider and craft beer production, and today it is recognized as one of the nation’s top craft beer producers. Stevens Point now distributes its products to 25 states.

The Milkshake Malt Porter is available year-round and is described as nostalgic and novel. A milk-based porter with hints of chocolate and malts, it is crafted from Munich and dark chocolate malts, Australian summer and Mount Hood hops, and lactose.

The first pour was impressive, showing an inky black color with a nice, foamy head that measured about 1.75 inches. It smelled very sweet with obvious chocolate tones. The porter had a robust, smooth first taste with a creamy mouthfeel followed by a sweet and not at all bitter aftertaste.

Overall, the Milkshake Malt Porter was mellow, charting at just 5 International Bitterness Units and clocking in at 5.5% ABV, so it went down extremely smoothly. Drinkers should exercise caution and enjoy this responsibly. I highly recommend this if you are a fan of chocolate, sweet beers in general or mild porters. I plant to go out and get a case of this to enjoy on my deck all summer long.