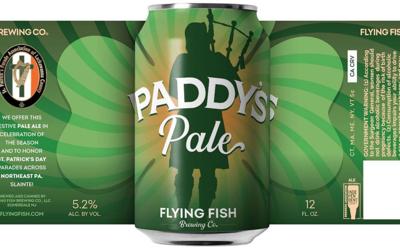 As a lifelong resident of Northeast Pennsylvania, I have a special place in my heart for St. Patrick’s Day.

Most of us have attended one or more of the local parades and took in the atmosphere of celebration. It’s an experience, to be sure: music, friends, fun and, of course, beer. I have participated in my share of pub crawls and bar hops and all sorts of shenanigans on Parade Day. Luckily, social media did not exist at that time, so there’s no proof and no embarrassing pictures (that I’m aware of). I’ve also had the opportunity to see some awesome bands, such as Flogging Molly and the Dropkick Murphys, just to name a few.

This week, I’m keeping the focus on the local scene and supporting some folks who put their hearts and money into keeping the traditions and craft beer scene alive and well here in the valley. Although not located in NEPA, Flying Fish Brewing Co. gives back to the area by giving a donation to the Lackawanna County Parade Day Association for every case and keg it sells of its specialty St. Patrick’s brew. (The Lynett and Haggerty families, owners of Times-Shamrock Communications, which publishes The Times-Tribune, bought a majority interest in Flying Fish in 2016.)

Founded in 1996 in Cherry Hill, New Jersey, and now located in Somerdale, New Jersey, Flying Fish operates as one of the most self-sustaining brewing operations in the world. It uses solar power, recaptured steam and an on-site rain garden to reduce its footprint while churning out a plethora of excellent beers. It boasts quite a lineup of craft beers and has a tasting room for anyone who wants to come in to sample the wares. Many of the items also can be purchased via its web store or found at a local distributor.

Flying Fish’s Paddy’s Pale is an ale crafted specifically for NEPA that’s only available during parade season across the region. A great little beverage, it clocks in at 5.2% ABV and thus is a perfect brew to enjoy in a long session with friends.

The beer had a very light gold color with a pour consistent with a pale ale: bubbly with a nice, foamy head. The head dissipated a bit as I drank it but left a bit of legs on the glass.

The initial sniff presented an aroma accentuated by its hoppiness with mellow, malty undertones — a pleasant combination of scents that tantalized the nose and helped prepare the palate for the first taste. The sip was pleasant, blending the hops and malts together in an ultimately satisfying way. Then, the drink presented a hoppy aftertaste that was slightly bitter but not overwhelmingly so. The brew clocks in at 27 International Bitterness Units, which is consistent for this type of beverage. The mouthfeel was thin, but with a pale ale that is par for the course and not something that detracts from enjoying it.

The brew was smooth from start to finish and left me wanting more. Go grab some friends and a case and help support the future of Parade Day in Scranton.