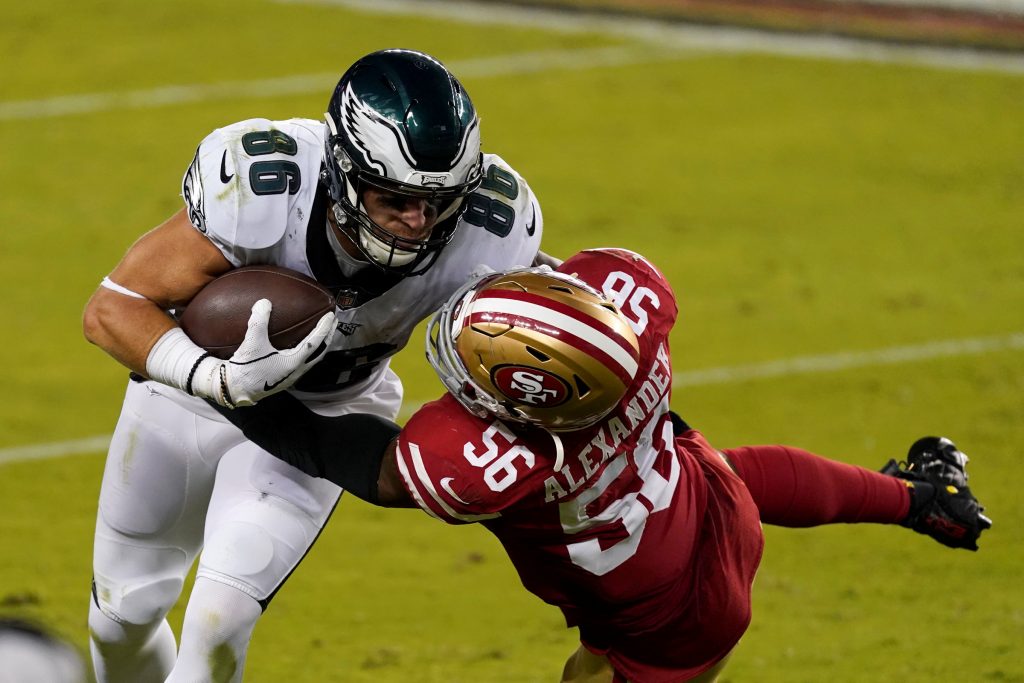 Eagles vs. Steelers: Predictions for the Week 5 game

Let’s get this out of the way early: This Eagles team has been difficult to figure out through its first four games. Aside from the Rams’ game, I haven’t been very successful with my predictions, and even that game I expected to be much closer.

Whether this impromptu bye week ends up helping the Steelers or hurting them remains to be seen. Whether Pittsburgh is an undefeated team benefitting from an easy opening schedule or actually an elite group remains to be seen. What we do know is this will be one of the best defenses the Eagles will see this season, with the Baltimore Ravens next week being the only serious contender for that title. The Steelers have a better pass rush than the Washington Football Team, who gave the Eagles’ offensive line fits. They’ve got a capable, opportunistic secondary led by safety Minkah Fitzpatrick. If Carson Wentz continues to struggle with accuracy, the Steelers will capitalize.

The Eagles’ young offensive linemen played well against the 49ers. Whether they can hold their own against T.J. Watt, Bud Dupree, and the Steelers constant blitzes will be a major factor in this game.

On defense, the Eagles’ front four will have to continue to be a self-sufficient, game-wrecking force the way it’s been the last two weeks. Fletcher Cox, Malik Jackson, and Javon Hargrave are the engine of the defense, and they delivered against the Bengals and Niners. This will be a game dominated by pass rushers on both sides of the ball. The Eagles biggest advantage may be their ability to stuff the run. They’ve allowed the seventh-lowest yards per carry in the league so far, making Ben Roethlisberger one-dimensional will be key.

All in all, I think the Eagles have a chance to win this game, but they’ll have to play their best game of the season to do so. I expect it to be close, but I’m not confident enough in this group yet to pencil them in for a tough road win.

The Steelers enter Sunday’s matchup with a COVID-related extra week off. They were still able to practice at their team facility — unlike the Titans, who are starting to make a mess of this season — and should be sharp. The Eagles are coming off a successful trip out west, but they sure could use a week off with all their injuries. They have 15 players either on injured reserve or PUP and could be missing more in Pittsburgh.

They survived without much at receiver for one week and could be getting either DeSean Jackson or Alshon Jeffery or both back. J.J. Arcega-Whiteside should be back in the lineup, but maybe it shouldn’t come at the expense of John Hightower or Travis Fulgham. Whoever the Eagles have at receiver, they need to do a better job of freeing up tight end Zach Ertz. Four catches for nine yards is inexcusable for someone of his talents.

Doug Pederson did a better job of scripting a game plan with more roll outs and RPOs against the 49ers and will likely need a similar approach vs. the Steelers to offset an impressive pass rush. Jordan Mailata did well in his first career start at any level of football, but T.J. Watt and Bud Dupree will be greater challenges. Carson Wentz was able to escape from a fair number of would-be sacks, and playing that way seemed to have rejuvenated the Eagles quarterback. But he can’t always be living on that edge.

The Eagles need Miles Sanders to average more than 3.5 yards a carry if the Eagles are to pull off the road upset. I’d try and find ways to involve him in the passing game and to get him into space.

The Steelers offense is still led by quarterback Ben Roethlisberger. It used to be that a defense could take advantage of his tendency to hold the ball, but he’s become more decisive as he’s aged. He can rely on James Conner, a north-to-south running back who has made most Steelers fans forget Le’Veon Bell, or at least no longer lament his departure.

JuJu Smith-Schuster is Roethlisberger’s top receiving target and will likely draw Eagles cornerback Darius Slay in man coverage. If he can be neutralized, the Eagles have a better chance against Diontae Johnson or rookie Chase Claypool. But watch out for tight ends Vance McDonald and Eric Ebron, especially if the Steelers can get them matched up against one of the Eagles’ linebackers.

The game will likely be decided up front. The Eagles’ defensive front is really starting to hum and should have an edge over the Steelers’ O-line. But the same could be said with counter units. Pittsburgh is 3-0, but it’s first three opponents have a combined 1-11 record. They may not be as good as their record suggests, just as I don’t think the Eagles are as bad as their 1-2-

1 record suggests. I’m looking for a close game, but one the Steelers ultimately pull out. 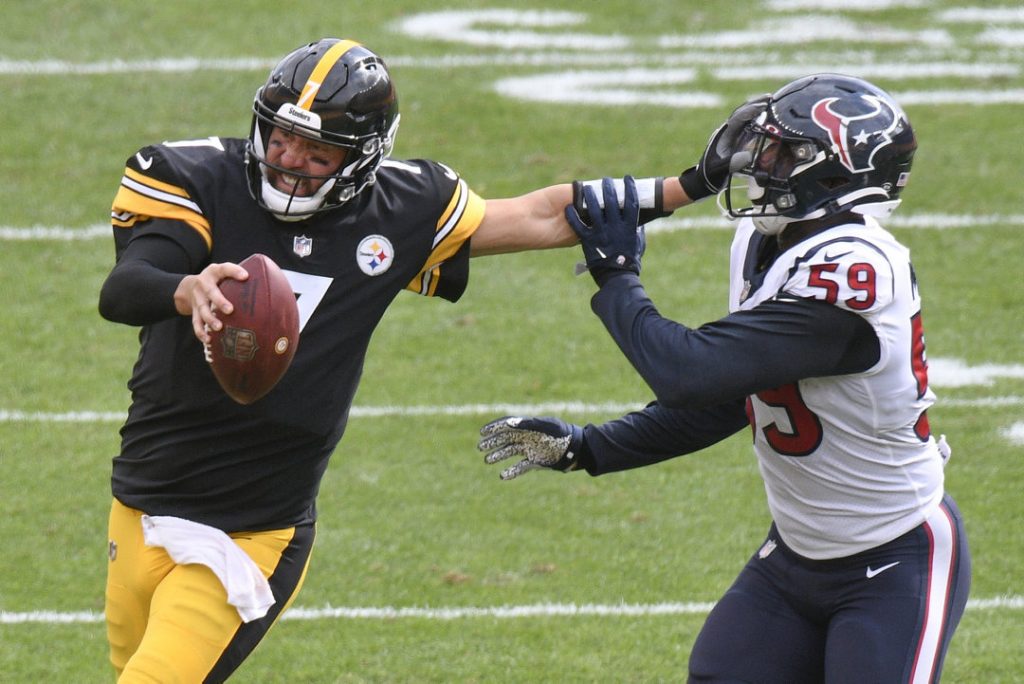 When asked earlier this week about the challenge of getting pressure on Steelers quarterback Ben Roethlisberger, who has the third fastest snap-to-release time in the NFL this season, Eagles defensive tackle Fletcher Cox said the key was stopping the run.

If the Eagles can shut down the Steelers’ ground game, specifically James Conner, they can put Big Ben in second- and third-and-longs and force him to hold on to the ball longer than he prefers.

Conner isn’t the speed back that often gives the Eagles trouble. He’s a power back who has averaged 6.3 yards per carry in the last two games and is seventh in the league in average yards after contact.

I think the Eagles can neutralize Conner and his backup, Benny Snell. But whether they can stop Roethlisberger from getting the ball to JuJu Smith-Schuster and Diontae Johnson and tight end Eric Ebron, I don’t know.

They can only hope Ebron slipped on the drool that came out of his mouth from watching what other tight ends like George Kittle and Tyler Higbee have done to the Eagles this season.

The obvious concern on the other side of the ball is the Eagles’ offensive line. They are coming off a pretty good performance in Sunday night’s win over the 49ers. But the Steelers have brought back Blitzburgh. They have 15 sacks in 3 games, and they’re going to blitz the hell out of Carson Wentz. Can Jordan Mailata and Nate Herbig and Matt Pryor hold up? We’ll see.
Doug Pederson is going to try and move Wentz out of the pocket again like he did last week. Maybe that will work, maybe it won’t.

What the Eagles need most is for Miles Sanders to have a big day. But the Steelers also have the league’s No. 1-ranked run defense.

I think the Eagles will give the Steelers a battle, but I don’t think they’ll win.

Because I am doing this last, I can see the other three guys’ predictions, and now I have this little voice tickling the back of my head that says anytime we all agree on something, the opposite happens. That was the case last week, when the Eagles won at the 49ers.

I can’t make myself pick the Eagles, though. Last week’s win showed plenty of resolve. It also teetered on the edge of disaster right up through the final snap. I haven’t seen enough from the Eagles to pick them to win at Pittsburgh, against an unbeaten bunch of Steelers. (And yeah, I know the Steelers have beaten three bad teams, but it isn’t like Mike Tomlin’s team sprang up out of nowhere. This is a solid, playoff-tested bunch.)

I particularly haven’t seen enough from the Eagles’ offensive line, matched against as good a D-line group as there is in the league. Play this game a couple months from now, when Jordan Mailata, Nate Herbig and Matt Pryor have far more snaps under their belts, maybe I would see it differently. Play it with Jalen Reagor and Dallas Goedert, maybe I would see it differently.

Right now, I can’t quite see it differently.