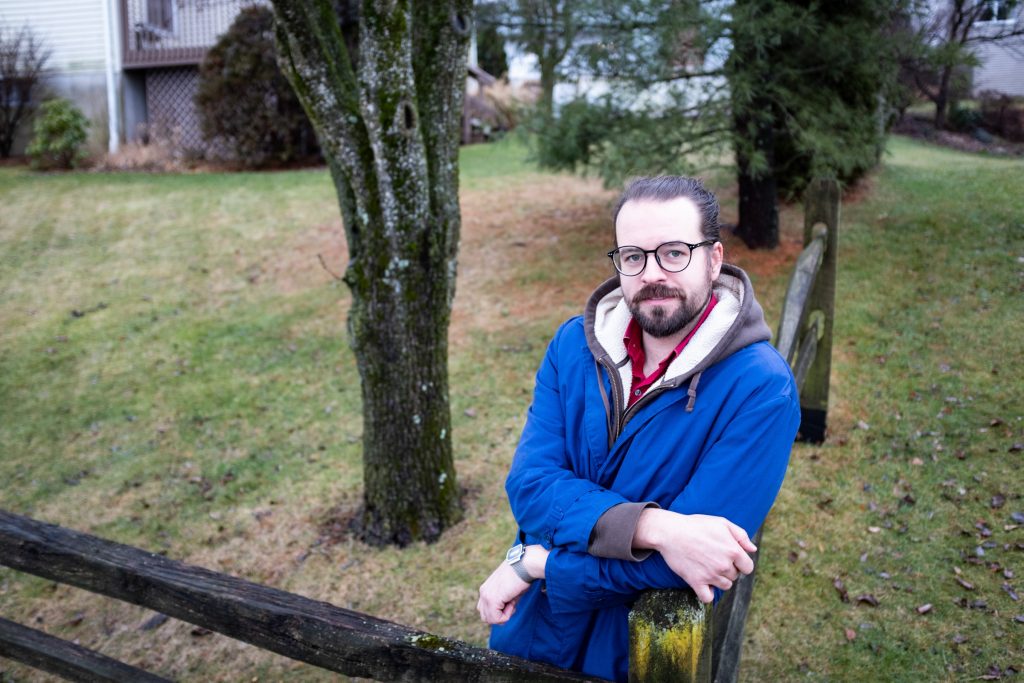 You can see Evan West’s work throughout the Smithsonian American Art Museum and Renwick Gallery in Washington, D.C. You just won’t find his name on the walls.

As an exhibit specialist, the Tafton native and Wallenpaupack Area High School alumnus builds and paints platforms the pieces sit on, constructs signs and wayfinders, and makes the cases to protect the pieces from the outside world. He also installs and un-installs the exhibits and is one of the few people allowed to touch the artwork at the museum, home to the world’s largest and most inclusive collections of art made in the United States.

He’s part of the museum’s behind-the-scenes team that most people don’t realize exist. That’s a good thing, however.

“If we’re doing our job right, you won’t notice,” said West, who now lives in Baltimore. “We’re making all the things no one notices that get you where you’re going and tell you what you’re looking at.”

While he was always on the creative side, West, 33, first fell into fine art by way of engineering. He liked building things — he grew up with a working knowledge of building and tools thanks to his father, Ric, a carpenter and contractor — and saw himself taking that route until he realized how much math and science it required. Art, and primarily design, bridged the two worlds, but the thought of sitting at a desk didn’t appeal to him either. Fine art spoke to him, and he had faith that he could make an artistic career work for him.

While pursuing a bachelor’s degree in fine art from Kutztown University, West spent a semester abroad in Rome, where he volunteered at Museo di Arte Contemporanea di Roma (Museum of Contemporary Art of Rome), installing works by the artist Sol Lewitt among other jobs.

“That was the first time I really got my first taste of museum work,” he said. “I wasn’t thinking about it in the long-term, but it was when my view of what working in art (involved) started to broaden.”

After graduation, West moved back to Northeast Pennsylvania, where he worked on his own art and showed it around the region. He also got together with a group of fellow artists and started the Independent Artist Collective, whose mission included fostering creativity, providing space for young artists to showcase their work, and connecting with individuals in visual art and other mediums, including music, film and more.

West went on to earn a master’s degree in fine art from Penn State University and starting hunting for a job, eventually coming across the posting for the Smithsonian gig. While the job involved installing art, which West had done around Scranton and throughout his time in school, he didn’t think he had the chops to qualify. But he submitted his resume anyway in a leap of faith.

“It was one of about 100 jobs I applied to, and I was really like, ‘They’re never going to call me back,’ but I wanted to cast a wide net,” he said.

He was both shocked and pleasantly surprised when he landed the job.

“I was doing all those things in regional and local galleries but on a much smaller scale,” West said. “They gave me a shot, though, and I’m grateful for that.”

West has had the chance to work with dozens of dynamic and interesting exhibits during his time at the museum, with a Burning Man installation being a standout. “No Spectators: The Art of Burning Man” brought the huge artistic pieces (which are hand-made and erected at the annual festival before they are, ritually, burned to the ground) from the Nevada desert to the entire Renwick Gallery building and its surrounding neighborhood, the Golden Triangle. West played a large part in the installation of the pieces, including FoldHaus Art Collective’s Shrumen Lumen, a collection of giant touch-sensory, glowing LED mushrooms.

“There was lots of cool stuff, and that was definitely one of the biggest blockbusters I’ve got to work on,” he said.

West still keeps his own love for art alive. In 2016, one of his sculptures was accepted into the prestigious “Art of the State” exhibit at the State Museum of Pennsylvania in Harrisburg. He often shows his artwork at Wayne County Public Library in Honesdale and has participated in ice-carving demonstrations at an annual West Reading festival. While he has found joy in working with soft textiles, such as a parachute, painting remains a favorite pastime, and he creates commissioned portraits as well as whatever his mind dreams up.

West hopes to one day make money solely with his art, although he understands that art is subjective.

“You kind of have to have this thick skin. … (The reaction) may be negative, but hate is still better than indifference,” he said.

West continues to find himself in a place where his job and passions overlap, and he can feed his soul while also keeping a roof over his head. While it’s a different career than he may have imagined, he’s always moved where life takes him and has designed his own future.

“(Artists) try to find this bridge between the two worlds,” he said. “ You do what you can and find the avenues to make it work. … I’m happy with what I’m doing and where I’m at.”