Ken Luckey attributes the Tunkhannock Area High School Marching Band’s rising numbers to support from within the school district and outside in the community as a whole.

This was evident on Friday night when the band unveiled its field show to an audience full of hometown supporters before the first home game of the football season.

“Everybody is recognizing how important music is to a well-rounded education,” said Luckey, the band’s director. “I think the students see that they’re supported in their pursuit of being a better musician and they take advantage of the opportunities that are given to them.”

This season, the band population has risen from 110 to 140. This number excludes the eighth grade band, which performs on its own, but joins the high school band in the stands for a special night on Sept. 27. A trend of welcoming more than 40 freshmen has also continued this year.

“We’ve seen a nice spike and we hope to continue that,” Luckey said.

The Journey-themed show has excited many TAHS musicians, including senior Robert Jenkins, the band’s president. 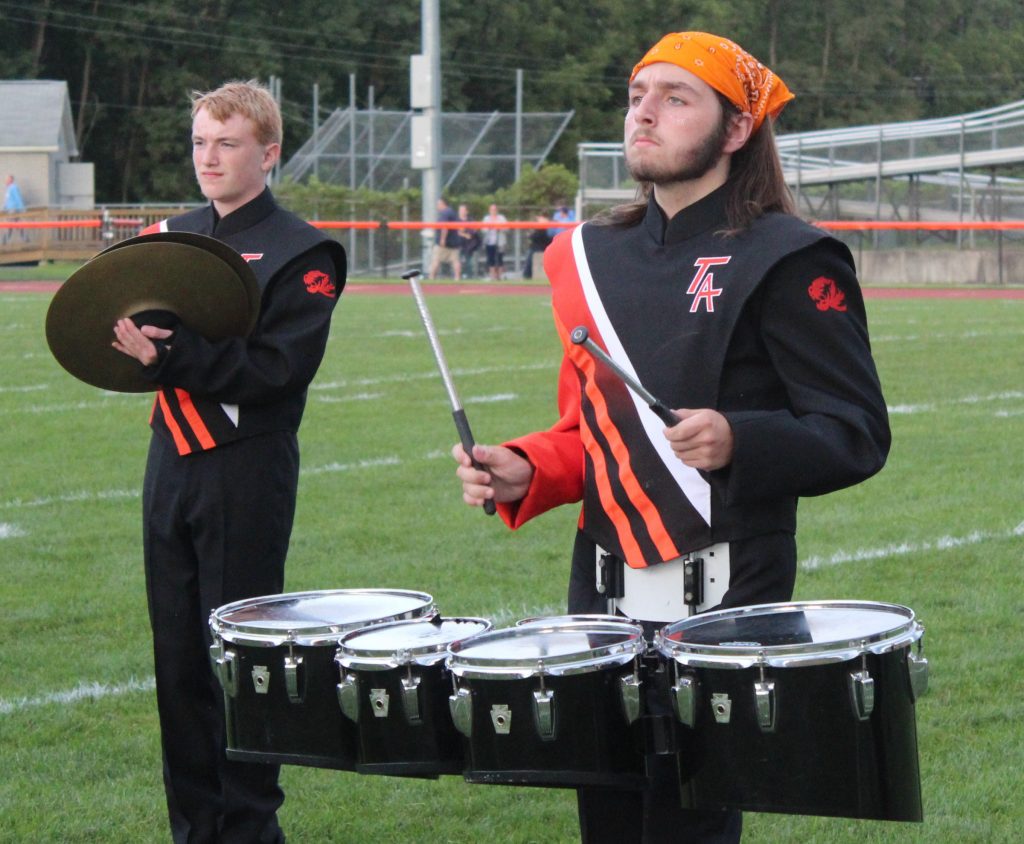 Elijah Goglin on the cymbals and Mykael Harvey on the drums add to the beat.

“My freshman year we did a Queen field show, so it’s kind of like a storybook ending,” said Jenkins. “We started with ‘Bohemian Rhapsody’ and we end with ‘Don’t Stop Believin.’ I couldn’t ask for a better field show my senior year.”

Once Luckey knows how many students have signed up for marching band, he figures out which songs would best fit the amount of players and instruments available. In July he designs the drill, which indicates for players when and where to move on the field. The students met for band camp from 9 a.m. to 3 p.m. from July 29 to Aug. 2, where they learned the bulk of the field show.

“It’s five long days but it’s definitely worth it and I feel like even with just that week, we all bond so much,” said Reynolds, a TAHS junior.

In the past two years, the band has learned the show within the first few days of band camp.

“I feel like we’ve done exceptionally well with it, especially for having such a big younger crowd this year,” said West, also a TAHS junior. “We have a lot of freshmen, but they picked up on it really fast.”

As drum majors, Reynolds and West conduct the band, but also strive to be role models for other musicians. In fact, both felt inspired to try out for drum major after seeing upperclassmen in the role when they were younger, specifically West’s older brother.

Once band camp concludes, the group practices until school begins and works to keep the show polished throughout the season.

“It’s fun to see the show evolve and see the kids get better. They’re super determined,” Luckey said. “It’s an excellent group. Every rehearsal they come more and more prepared and it’s been really exciting to see how much they’ve improved in just a few weeks time.”

In addition to Luckey as band director, there are five assistant directors who contribute to the band’s success: Tara Kasperowski, Kevin Kreinberg, Jeff Howell, Molly Murphy and Kerri Franko.

“I think our music faculty at Tunkhannock from kindergarten and up does a fantastic job getting kids prepared and getting kids excited to be musicians,” Luckey said. “It’s one continuous team effort that sets the kids up to succeed.”

Looking back over his last three seasons, Jenkins feels glad to see how far the band has come.

“We went from a low brass section of only two tubas and one trombone to four tuba players and over seven trombones,” Jenkins said. “Everyone puts their all into this. Not to brag, but I would say with how dedicated our kids are, this is definitely the best band program northeastern Pennsylvania has to offer.”