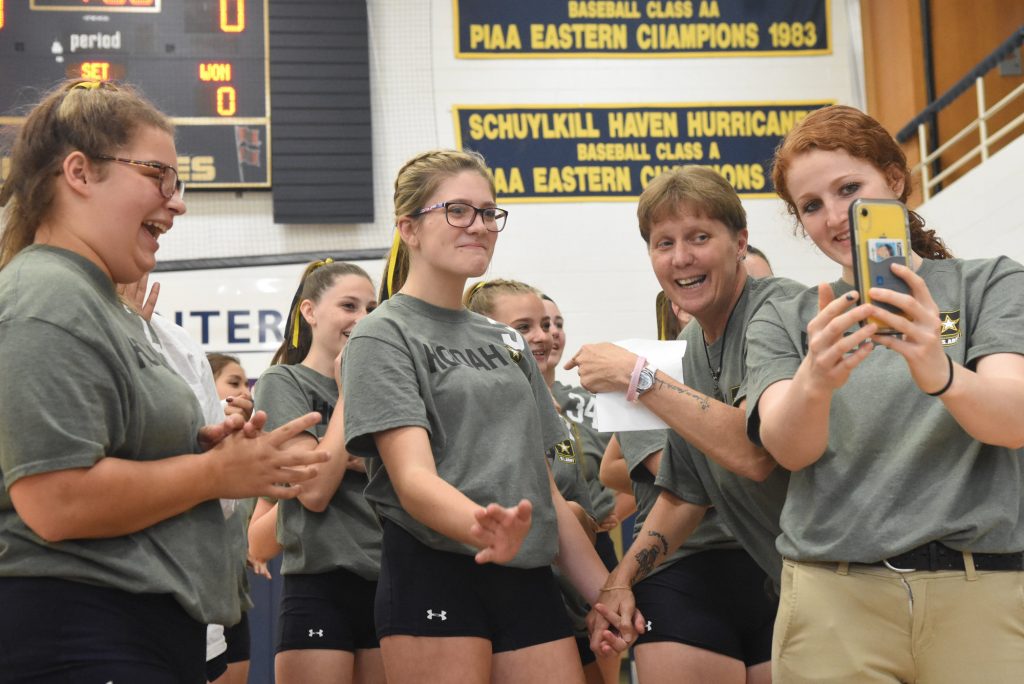 Thanks to broadcast, soldier sees daughter play from afar

When Staff Sgt. Lauren Beecroft told her fellow military personnel that she was going to watch her daughter play volleyball, they were all ready to support her.

“I am in charge of a lot of medics and they wanted to paint their face and do all sorts of crazy things,” she said. “But I was like, ‘Well, hey, guys, it’s at 11 o’clock at night.

Despite the late hour at her United States Army base in Europe, Beecroft wasn’t going to miss seeing her freshman daughter, Avrie Brode, play in Schuylkill Haven’s junior varsity match against Williams Valley. The Pennsylvania Army National Guard soldier was able to watch it after Schuylkill Haven’s internet technology director, David Pizzico, set up a Facetime broadcast of the match at the CACL Center.

As Beecroft’s sister, Rebekah Tolar, held Beecroft’s 6-year-old son Brady in her lap in a seat on Schuylkill Haven’s bench, Tolar used a telephone application to display the match to Beecroft. In turn, Beecroft’s face was shown on a large monitor in the gymnasium as the match was played. That monitor gave the crowd, including other members of Beecroft’s family, the chance to see her.

“There was always a small undertone that something was happening,” Beecroft, who was deployed in March, said. “I didn’t realize the magnitude of it, though.”

As part of the event, a banner saluting Beecroft was displayed and some in the stands waved camouflage pom-poms. In addition, all of Schuylkill Haven’s players wore Army green jerseys with the chant “Hooah” on the front. With Beecroft saluting from Europe, the National Anthem was played.

The event was the brainchild of Schuylkill Haven assistant coach Nanette Wagner. The longtime volleyball coach became acquainted with Beecroft when Beecroft, 34, was the high school nurse for two years before turning to her Army career. Wagner said an email set the event in motion.

“It was just a stunning email from her,” Wagner said. “… I guess the way she wrote not being able to see her daughter play this year, and how she wrote she would be deployed a whole year and she would come back and be the best volleyball mom that we would ever have.”

Wagner added that Beecroft advised Wagner to care for Brode as a strong female role model.

Fighting back tears, Wagner said, “I thought we really needed to do something. She’s serving our country and her daughter’s here.”

The sentiment was echoed by Toler, who spoke during a pre-match ceremony and said, “Avrie has stood tall with resilience and grown as a young lady despite the sadness of missing the most important person in her life.”

Brode showed that resilience with her first turn behind the service line against the Vikings. She served four aces and the Hurricanes scored five straight points for a 9-4 lead in the first set.

“It actually got me nervous,” Brode said about the service run. “I thought, ‘Oh, Mom’s watching, so I’ve got to be perfect,’ but I tried to forget she was here and just do my best.” 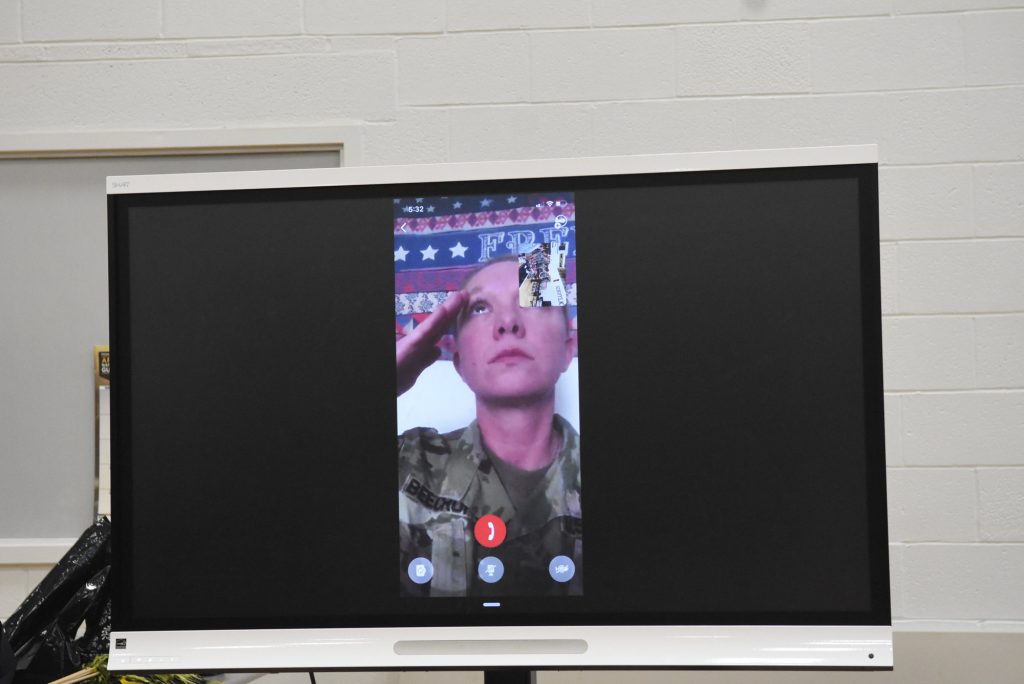 JACQUELINE DORMER / STAFF PHOTOGRAPHER
Schuylkill Haven native and Staff Sgt. Lauren Beecroft, Pennsylvania Army National Guard, salutes the American flag during the playing of the national anthem as she is live on a large screen in the CACL Center at Wednesday’s match at the CACL Center in Schuylkill Haven.

“It’s really cool because it’s the only game she gets to see. When I found out about it, I actually cried,” Brode said after serving six points and earning seven digs in the match.

Beecroft, a Schuylkill Haven graduate who played basketball, was simply proud her daughter had found her own sport.

“She told me when she was little that basketball was my dream, not hers,” Beecroft said. “So if volleyball is her dream, I support that 100 percent. My only advice is to keep getting better.”

When the match was over, family members and the media took turns talking with Beecroft, who noted it was 12:30 a.m. in Europe and that she had to be up at 6 a.m. that morning. But Beecroft didn’t sleep before Tolar took her phone in front of the stands and encouraged the fans to wave to Beecroft. Tolar then took the phone back to Avrie, warming up for the varsity match.