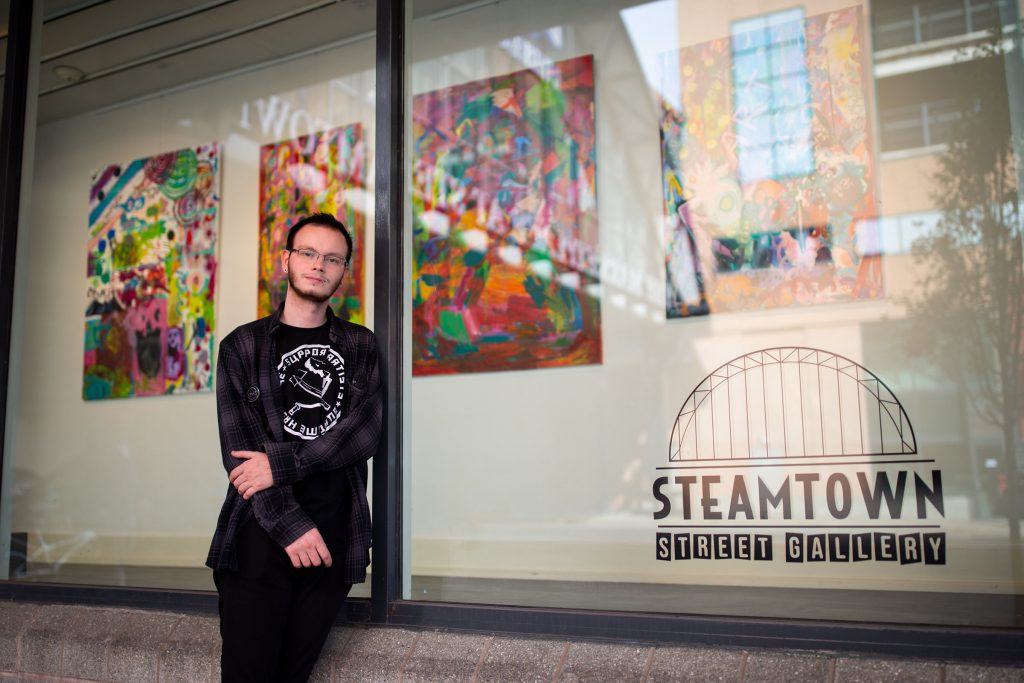 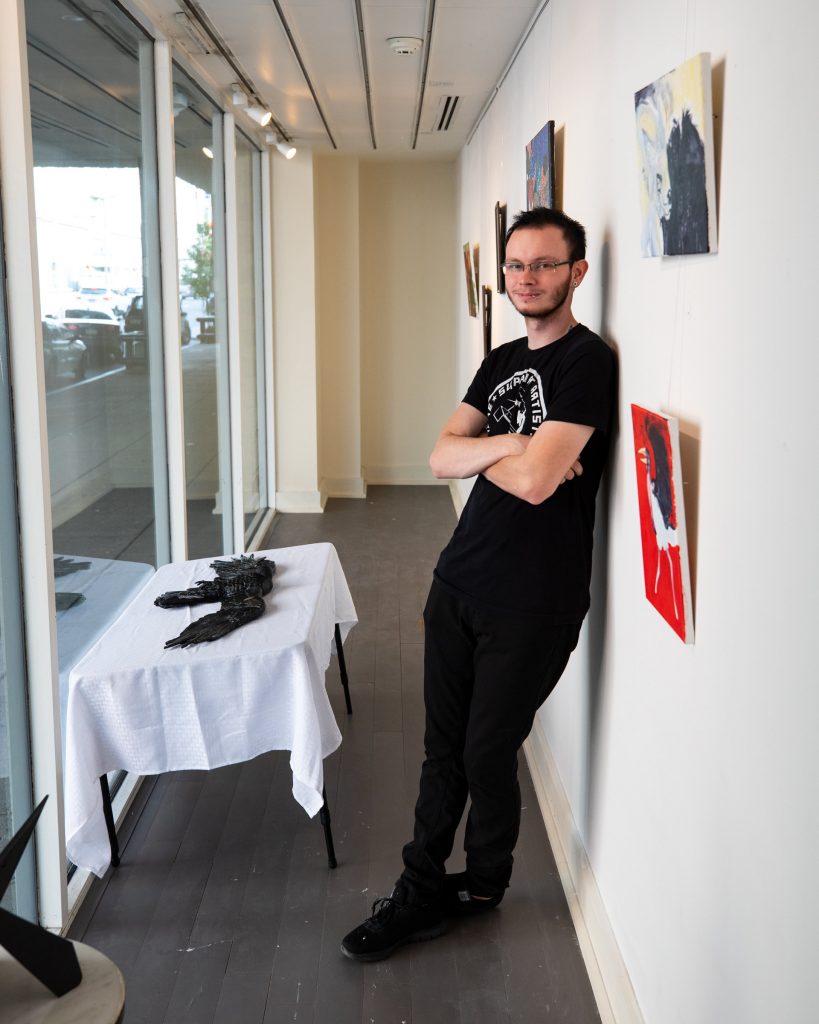 Brandyn “Cloud” Bembenek has reinvented the idea of a window display.

As the interior of the Marketplace at Steamtown continues its transition from a traditional mall to a modern collection of businesses, educational programs and more, the Scranton artist has helped transform its outer appearance with a new gallery.

The Steamtown Street Gallery opened this summer, taking over two former store display windows on the outside of the marketplace in the 300 block of Lackawanna Avenue, adjacent to NBT Bank. Bembenek, 24, came up with the idea for the project after opening an alternative art store, Corvid, in the Scranton Public Market on the marketplace’s second floor in July.

“I just thought that they should do something with the empty windows instead of just leaving them empty,” he said.

A 2013 alumnus of Scranton High School who graduated from the University of the Arts in Philadelphia, where he studied illustration, Bembenek got interested in art, and particularly drawing, as a kid. Today, he creates lots of work “in the realm of occult,” he said, but his pieces also play into social commentary at times, too. He recently did a “Stranger Things” project that involved inking his drawings and then putting it all into Photoshop to create a digital final piece.

“Personally through my artistic upbringing in high school and college, because of my dark arts, I felt like I was never really favored or shown very much, and I just wanted to give that kind of opportunity to other people. … There are some unspoken criteria of what I will and won’t allow, but it’s fairly common sense,” he said.

Bembenek, who also bartends part-time at Cosmic Cinemas across the street from the gallery, has shown his work locally in the Connell Building, Scranton High School, the former American Eagle space in the marketplace and the now defunct New Visions Studio & Gallery. But he had seen similar window art displays during his time at the University of the Arts, and he approached the marketplace about installing a community-focused gallery there. Jenn Warnetsky, general manager of the Marketplace at Steamtown, said she was “happy to give” him that outlet.

“I think that it’s really important that everybody knows and understand that first and foremost we’re a local company, and we support very local (projects),” she said.

The Scranton Public Market keeps growing, Warnetsky added, and because it is open not just to typical food vendors but also local artists, they decided to grant the space to the gallery and give artists a chance to show their work on busy Lackawanna Avenue.

Bembenek assuaged any worries the marketplace might have had about installing artwork on its walls, crunched some numbers and came up with a logo, and soon he was inside the window setting up his first exhibit. Some of the pieces include work from another Scranton Public Market tenant, the Electric City Art Studio, where the community can take art classes, hold artistic birthday parties and check out other creative activities.

“I figured it would be a nice thing to kind of get the word out,” Bembenek said.

He selected other pieces from a public call for artwork and filled the rest of the space with items from Kingston resident Sophia Krupsha, a Scranton Preparatory School graduate and Penn State art student.

“Some of her stuff will be in there to help fill it up because I expected the first month to be kind of light on work from the community,” Bembenek said.

“I thought the colors popped. … (Bembenek) made some really smart decisions,” she said. “I can’t wait to see how he curates for October.”

Bembenek said the public has responded positively to the gallery so far.

“People think it looks nice and it looks cool,” he said, adding that the artists “are just happy and excited to show their artwork anywhere.”

Passersby are “starting to see the little bit of the uplift we’re bringing to Lackawanna Avenue,” Warnetsky said.

“I think that everybody loves having something there and the fact that it is something different,” she said.

For Warnetsky, remembering where the marketplace came from remains important, but she also hopes the public understands what the marketplace is doing to transition from what they knew as the Mall at Steamtown to an entity with a revamped approach to filling commercial space — one that now includes a street-side gallery.

“It really is the key to getting the community to come back and see what the changes are all about. … We just really want to showcase what we have in the community and be a place that anybody can come hang out and spend the day.”

For October’s exhibit, Bembenek put out another call for submissions online, and he plans to include some of his own work as well as other Halloween-themed pieces from the community. The public can follow the gallery’s journey online on the Steamtown Street Gallery Facebook page and on Instagram at @SteamtownStreetGallery.