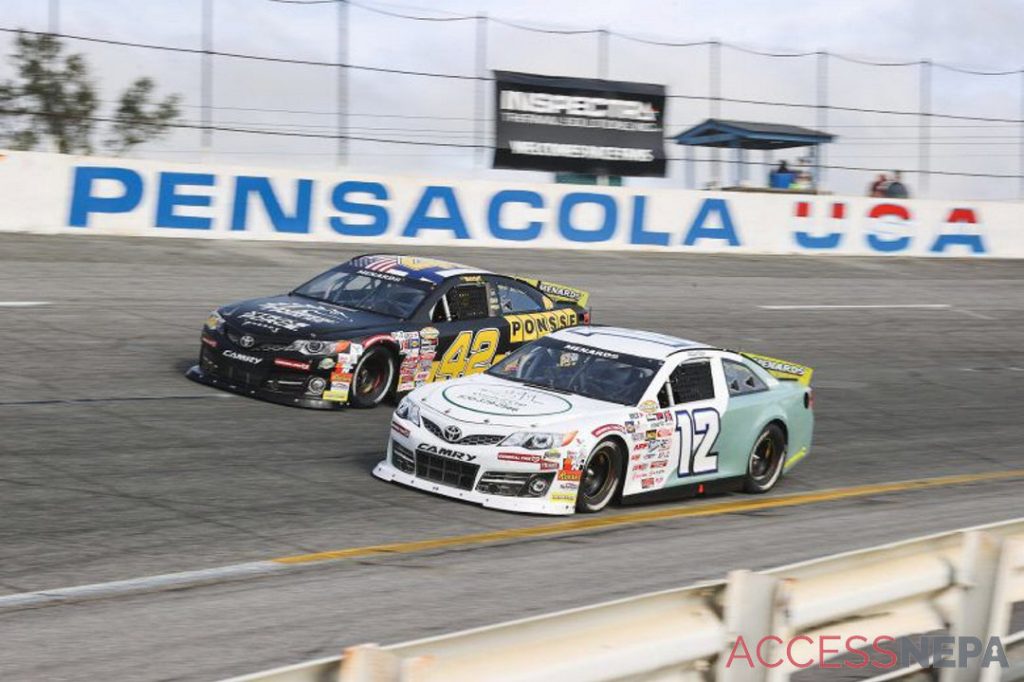 For Stephanie Moyer, the dream of competing in the professional ranks of stock car racing came to fruition as the 23-year Sheppton native last weekend made her debut at Five Flags Speedway in Pensacola, FL for the Pensacola 200 Presented by Inspectra Solutions with the ARCA Menards Series East.

Moyer, who is the 2020 Evergreen Raceway Factory Stock champion, drove a car prepared by 1995 ARCA Menards driving champion Andy Hillenburg to a respectable eighth place, making her debut one worth noticing considering she had very limited seat time heading into the event.

And, despite a pair of minor incidents she still achieved her goal of a top-10 finish. Her Fast Track High Performance Racing teammate Richard Garvie finished 10th.

Bottom line was she was not out there to win but rather race her own race, be patient and complete the full 200 laps.

“I was actually calmer there then when I was at Evergreen which makes no sense,” admitted Moyer.

“I was more nervous about practice then the race. I had never seen the track nor run it on iRacing before so I watched a lot of YouTube video to kind of get a good picture for the lines I had to run. It was kind of close to how we ran Evergreen and plus the car was set up really well,” she continued.

“The whole time I was trying to get my lines down and it was not always easy because one lap the car was good at one end (of track) and not the other and then change to the opposite corners the next time around.”

This was the second race of the 2021 ARCA Menards Series East season which saw pole sitter Sammy Smith hold off Taylor Gray for the win. Rain washed out time trials and prior to that there was a staged practice session that set the starting grid which put Moyer 10th for the onset of the 200-lap contest.

Once the race got underway she used each lap to get more familiarized with the track and her equipment. This was, after all, a huge adjustment from what she had been accustomed to when she ran a Factory Stock. The ARCA car weighed much more, had significantly higher horsepower and was further more sophisticated. This was also her first time working with a spotter. 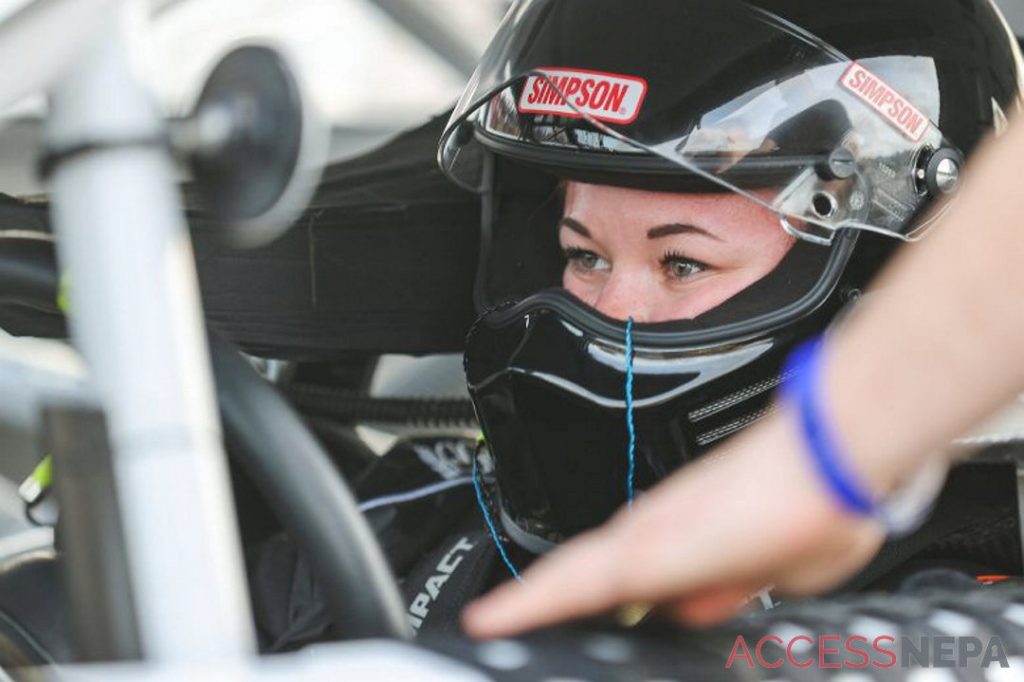 “The coolest thing was just taking in the whole day’s experience and taking it to that next level. It was a whole new animal and it was so nice with the grip,” explained Moyer.

“I am not use to having mirrors or having someone in my ear but it was nice although that will take some getting used to. I do feel that having the spotter, more so then mirrors, it a huge benefit.”

Moyer even had along with her a number of long-time sponsors from here Evergreen days including Council Cup Campground of Wapwallopen, American Legion Post 473 in Freeland, Kelchner Motors, Sugarloaf, Act Towing and Repair, Mountain Top, Donadi Grafix, McAdoo and Highland Social Club of Freeland.

Hillenburg, who has for years been providing aspiring young talents quality rides within ARCA and NASCAR, came away impressed with his newest apprentice.

“I was very pleasantly surprised with the way she did. When you have your first race in the ARCA cars or even any of the NASCAR Series’ is usually very difficult because of the transition of these cars weighing a lot more and the tire wear and falloff that goes with that – so I think she adapted very well to all that,” said Hillenburg.

“Basically she got around 30 laps or so of practice and got thrown right into the fire and yes she spun out once and then got turned around once which cost her a few laps from getting going again but if you toss those two things out of the equation I feel it was all pretty good for a first try in these cars.”

Before making her first ARCA start Moyer had to get approved by the organization and that occurred a month earlier with a test session at Daytona International Speedway. There she went out and showed good speed, well enough to get the consent to compete, although limited to short tracks for the time being.

Keep in mind too, at 2.5-miles Daytona is a huge variance from the 1/3-mile Evergreen Raceway but a self-confident Moyer drove the superspeedway attentively.

“My first thought was please don’t wreck because I’ve never been on a track that big and with those speeds. I didn’t want to make a fool of myself and I wanted to show those guys what my talent was and prove what I can do,” she recalled.

“I was asked what was it like going 185 mph and I said I didn’t know because you don’t really pay attention to the speed – you’re more worried about your line and the focus.” 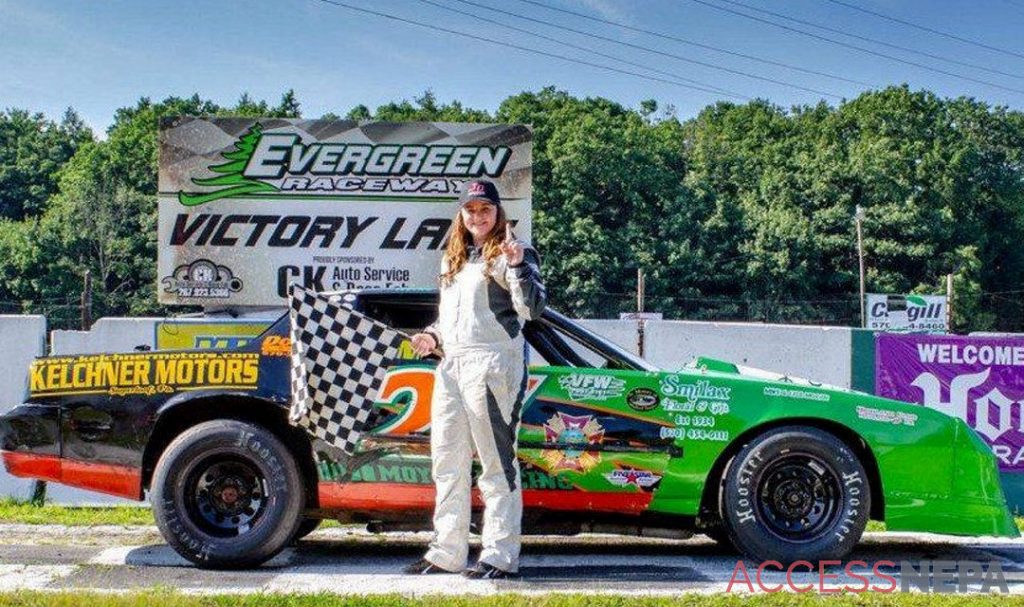 BILL ELKINS / CONTRIBUTING PHOTOGRAPHER
Stephanie Moyer poses in Victory Lane after winning a race at Evergreen Raceway earlier this year. The 23-year-old Sheppton driver has been pegged as a developmental driver by Racing Development Consultants of North Carolina with the focus on ARCA and NASCAR.

Until her next race, which takes place on May 8 at the ½-mile Nashville Fairgrounds Speedway in Nashville, TN for the Music City 200, Moyer will be taking what she learned from Five Flags as well as utilizing video and iRacing, a simulator program, to improve and be ready for that race.

“She’s definitely gaining on it every day. This is a process that’s never fully compete. The minute you think that you learned everything there is there is always more added to your plate and that’s what I like about Stephanie and the effort she’s putting in to keep learning,” added Hillenburg.

“There are some similarities with Pensacola and Nashville as far as the tire speed falloff and I think that will help her when we get there. With this race now under her belt I feel she’ll do even better next time as she has a good idea of what to expect.”

While her rookie year with ARCA will remain focused on short tracks that does not rule out the possibility of a superspeedway race before the season is out and it could very well be Pocono. That, however, is dependent upon sponsorship.

“She and her family are putting a lot of confidence in me in what I can do within their sponsorship budget to best prepare and I’m really hoping that she can get a superspeedway start by the end of the year. She’ll need to get a few shorter track races in and get the routine in. I’m really looking forward to the future with Stephanie,” said Hillenburg.