When it comes to Gov. Tom Wolf’s order allowing outdoor dining for counties in the yellow phase of reopening, some Schuylkill County restaurants are working to allow diners to eat outside, while others are not.

Meanwhile, city officials in Pottsville plan to discuss ways to make it easier for restaurants there to serve customers outdoors.

On Thursday, Dutch Kitchen co-owner Jennifer Levkulic and employees were setting up tables and stringing up lights underneath a large enclosed white tent attached to the rear of the restaurant on Route 61 in Frackville. Underneath were 10 tables, with four chairs at each one, but she said Thursday she was considering placing two or three tables outside the tent. Several of the tent’s flaps are open for ventilation.

“It’s exciting, gives us hope that things are getting better,” she said standing under the tent, which is being rented from Ark Rentals, Orwigsburg.

Restaurants and retail food service businesses in counties designated in the yellow phase of reopening can allow in-person dining in outdoor seating areas beginning today. Indoor areas, including bar areas, must be closed to customers except for through traffic, and customers must be seated at a table to be served. The guidance adds that non-bar seating in outdoor areas can be used to seat customers.

Under the revised guidance, self-service food or drink areas — such as buffets or salad bars, reusable menus and refilling food and beverage containers — are not allowed. Condiments have to be dispensed by employees upon customer request. No condiments are allowed on tables.

License holders wishing to apply for the temporary extension, which expires at the end of the current public health emergency, can do so without paying the $220 filing fee, according to PLCB officials.

Stephanie Otterson, director of communications for the Pennsylvania Restaurant & Lodging Association in Harrisburg, said whether a restaurant can just open for outdoor dining depends on the restaurant. If they carry a PLCB license and plan to serve alcohol, they have to apply for the temporary extension of its permit to serve alcohol. If they just serve customers, she said restaurants just have to follow the requirements set by the state. If an extension is put on municipal property, the municipality will have to approve the extension.

If they chose to extend their premises, Otterson said restaurant owners will have to check with their insurance carriers to see if the new dining space is covered. They also have to consider occupancy limits, which she said are the same both outside and inside the restaurant, and that customers are safe.

“They should make sure tables are distanced six feet apart,” she said, adding it is also not advisable for customers to seat themselves. Further, bar service is not allowed under the yellow phase of reopening, she said.

There is also the concern about ensuring the establishment is clean and sanitized, something at which restaurants are already good, Otterson said. 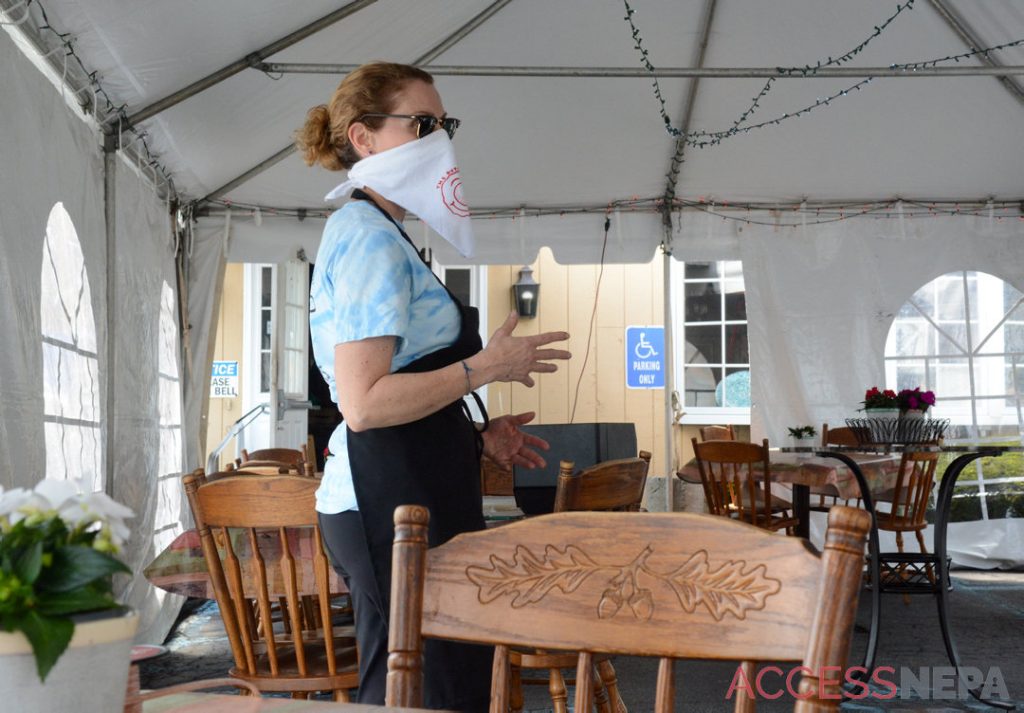 The ideas include facilitating an easier and more timely process to allow restaurants to expand or establish outdoor seating; creative placement for outdoor dining such as in parking lots and on streets; and establishing an open container law, which would ease restrictions on having alcoholic beverages in public when drinking as part of a meal.

He said he is hoping to discuss the proposal at the next city council meeting, slated to be held virtually Monday.

“We hope it will be a positive thing for everyone,” Palamar said.

The city zoning is fine, he said, adding that restaurants are in commercial zones. There are no plans to ease it for outdoor dining. 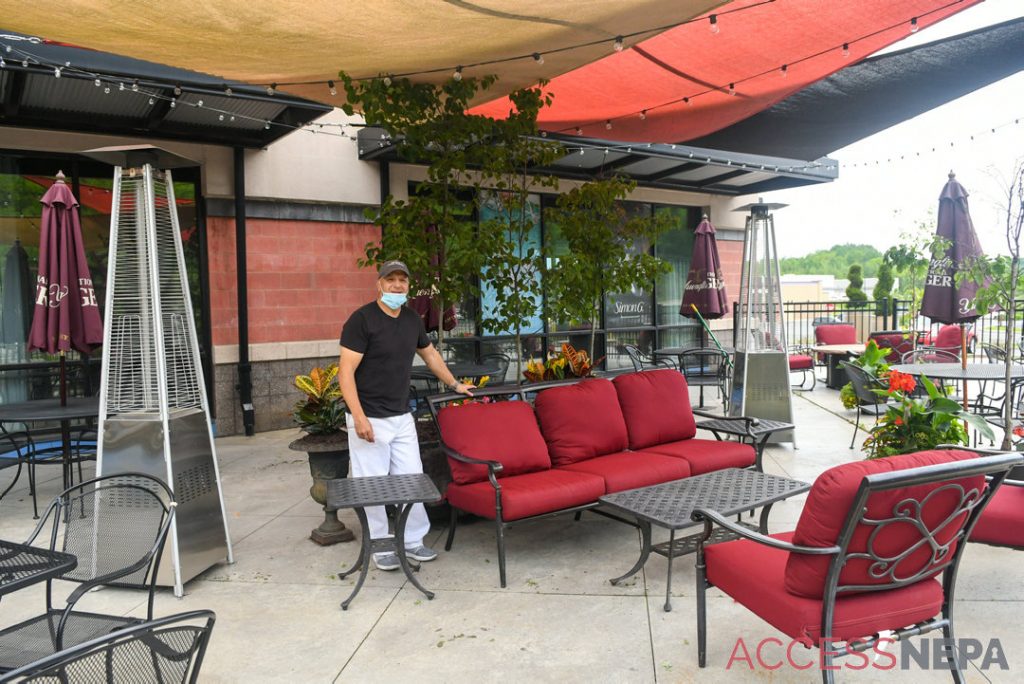 Levkulic, who co-owns the restaurant with her husband, Tom Levkulic, said customers will be asked if they want a condiment and it will come in a souffle cup on their plate, refills will be done in a separate cup and while reservations aren’t required, customers can call ahead for seating. The restaurant offers takeout to customers and modified its hours from 6 a.m. to 9 p.m. to 7 a.m. to 8 p.m.

Eric Zendrosky, Dutch Kitchen’s head waiter, said he is “excited and ready” to offer in-person dining outside the restaurant.

In addition to Dutch Kitchen, Vito Valenti, owner of Vito’s Coal Fired Pizza and Restaurant at Coal Creek Commons in Saint Clair, said he plans to open the restaurant’s outdoor patio today, which seats up to 45 people. Diners have to be sitting outside and will be socially distanced, with tables spaced out six feet apart, he said. Families that come in will be seated together, but Valenti said other groups will be spaced out. Curbside pickup is offered at Vito’s.

Roma Pizzeria and Restaurant co-owner Peter J. Russo said he is considering offering outdoor dining, but it will depend on whether the county moves from the yellow phase of reopening to the green phase. The restaurant on West Market Street in Pottsville offers takeout and delivery, in addition to online ordering for pickup. 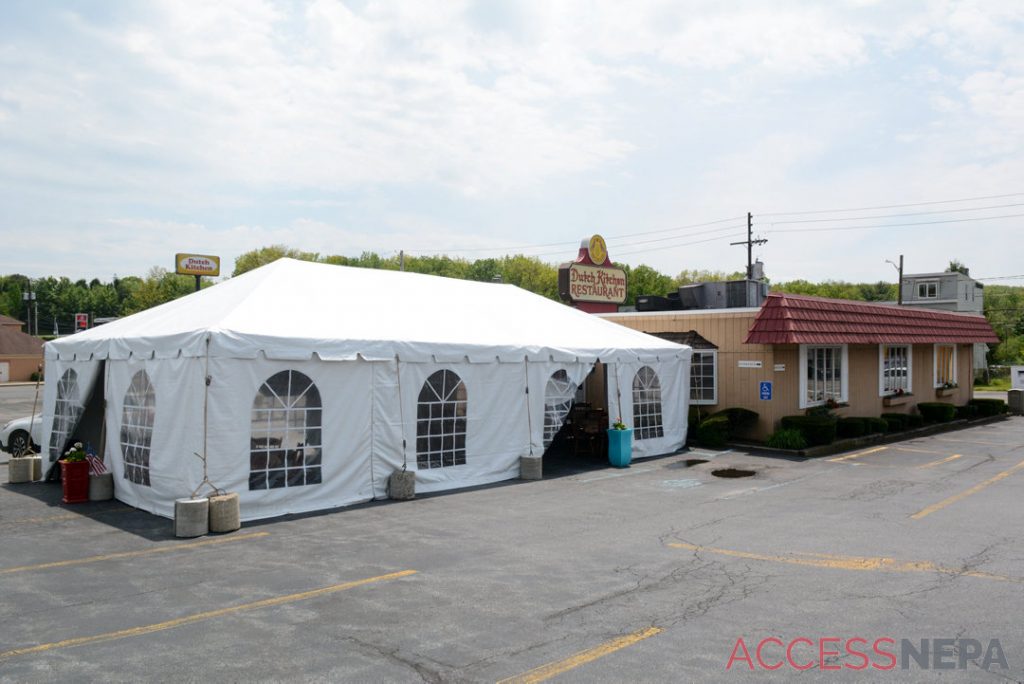 LINDSEY SHUEY / STAFF PHOTOGRAPHER
A tent is set up Thursday in the Dutch Kitchen Restaurant parking lot in Frackville. The restaurant will offer outdoor dining, which is arranged in the tent.

Other restaurants are not planning to offer outdoor dining. Hector Rodriquez, executive chef and general manager of Crimson House on North Centre Street in Pottsville, said the restaurant is closed for renovations, with plans to reopen in either September or October. The work includes a complete renovation of the restaurant and an expansion into two neighboring buildings.

A manager at Red Lion Cafe on Deturksville Road in Washington Township said the restaurant has no plans to offer in-person dining until the county is in the green phase of reopening, adding there is no outdoor seating. Takeout is offered from 11 a.m. to 8 p.m. Tuesdays through Sundays.

David B. Crouse, owner of 3C’s Family Restaurant on Route 61 in Port Clinton, said the restaurant has been closed since March, with no plans to offer outdoor dining. Takeout and delivery are not offered. The 14 employees at the restaurant have been furloughed, he said.

Crouse said he is “carefully calculating” how to reopen based on his business needs and employees’ needs and comfort levels. In the meantime, employees were SafeServ certified and he has been doing maintenance at the restaurant.

“Once people get it, the numbers will come back for revenue,” Crouse said. “We’re carefully watching what happens.”