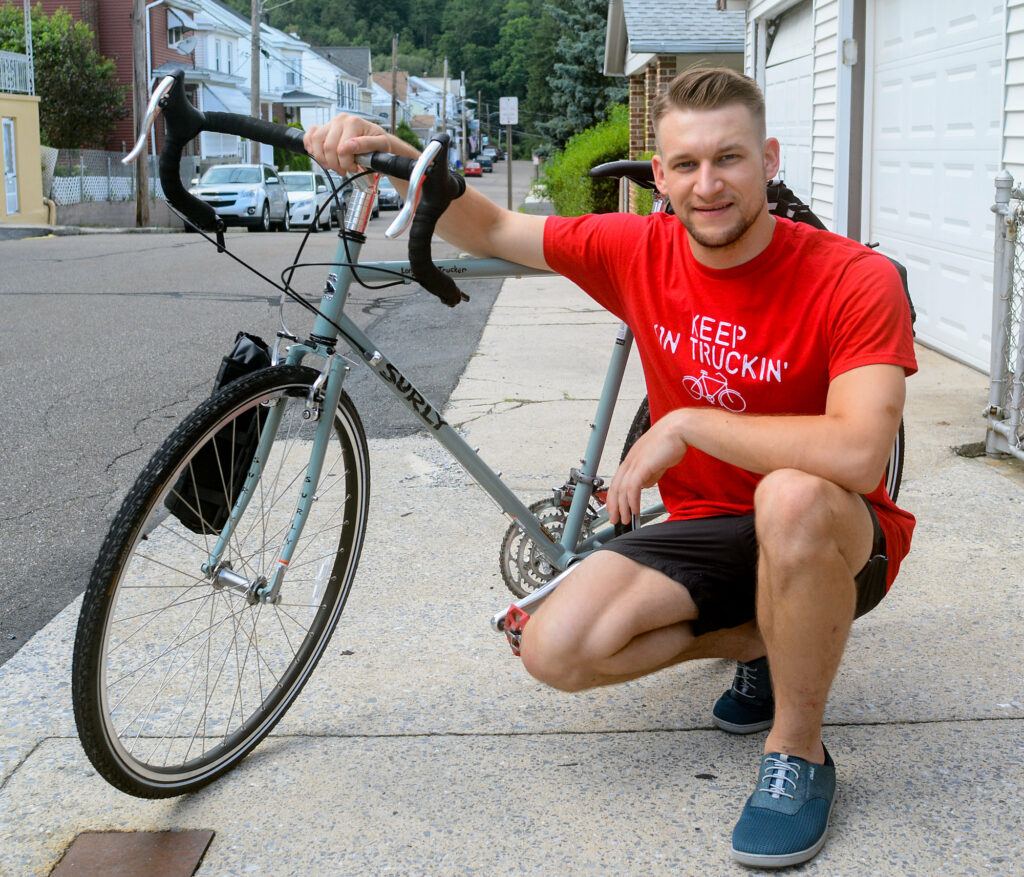 ANDY MATSKO / STAFF PHOTOGRAPHER
John Matulevich, of Saint Clair, poses with his bike at home on Friday, June 28, 2019.On Aug. 24, he will start at the Golden Gate Bridge and ride his bike to Garfield Square in Pottsville — on the Ruthless Performance Ride America, a 43-day, 3,870-mile ride to raise money for Back in Black and Hillside.

As he prepares for the adventure of a lifetime, John Matulevich said he couldn’t ask for a better training partner than Kronos.

“He’s a real good boy,” the 25-year-old owner of the human performance company, Ruthless Performance, said of the pit bull he adopted in 2016 from Hillside SPCA.

The following year, Matulevich, Saint Clair, and his girlfriend, Angel Cicero, adopted Naomi from Back in Black Dog Rescue, Tower City, in 2017, which had rescued her from a high-kill shelter in Georgia. A “special lady,” Naomi, a pit bull/Labrador mix, was the first dog that came into the Matulevich home after John and his girlfriend became fosters for Back in Black.

Prompted by his love of animals, Matulevich, with Kronos at his side, is now training for a cross-country trek. Starting at the Golden Gate Bridge and ending at Garfield Square, on Aug. 24, Matulevich will embark on the Ruthless Performance Ride America, a 43-day, 3,870-mile ride to raise money for Hillside and Back in Black Rescue in Tower City.

“I’ve chosen these because of their ties to our community and thought that they’d be something positive to unite the county behind,” he said in an interview this week.

Having travelled across the country six or seven times on summer vacations — he doesn’t remember exactly how many — and once on a “28 states in 28 days” vacation, Matulevich is excited to do it again by bicycle.

“Navigating this great country is something I’ve come to enjoy,” he said. “Doing so on a road bike will add to the excitement and allow me to interface with my surroundings much more closely than one can do in a car and on a highway.”

A state swimmer in high school and college, Matulevich started cycling in 2018, taking part in a 65-mile trek from Philadelphia to Atlantic City, called The Ben to the Shore ride — in its 32nd year this year.

“After this I realized the vast distances I could travel with my own body being the vessel of locomotion, which as a sport scientist, I thought was fascinating,” he said.

His discovery of even more extreme physical tests, such as ultramarathon running, increased Matulevich’s interest in testing his endurance.

Matulevich will start on Aug. 24, following the popular Western Express and TransAmerica bike routes, known as the Appalachian Trail of biking. He’ll travel 90 miles each day, often in places like Route 50, called “the loneliest road in America.”

“In many cases, I’ll be camping,” Matulevich said, “where I’m lucky enough to find hotels I’ll be happy to use them. I just, unfortunately, can’t rely on access to these, as many parts of the route will be so far off the beaten path.”

Preparing for the bike ride has afforded Matulevich to raise awareness for the animals, but donations “have been at a trickle.” The real challenge has been coordinating Oct. 5’s Finish Line event, where Matulevich will triumphantly return to Pottsville with live music, drinks and a raffle, all for his chosen charities. This event will be the primary fundraiser of 2019 for Back in Black and Hillside. 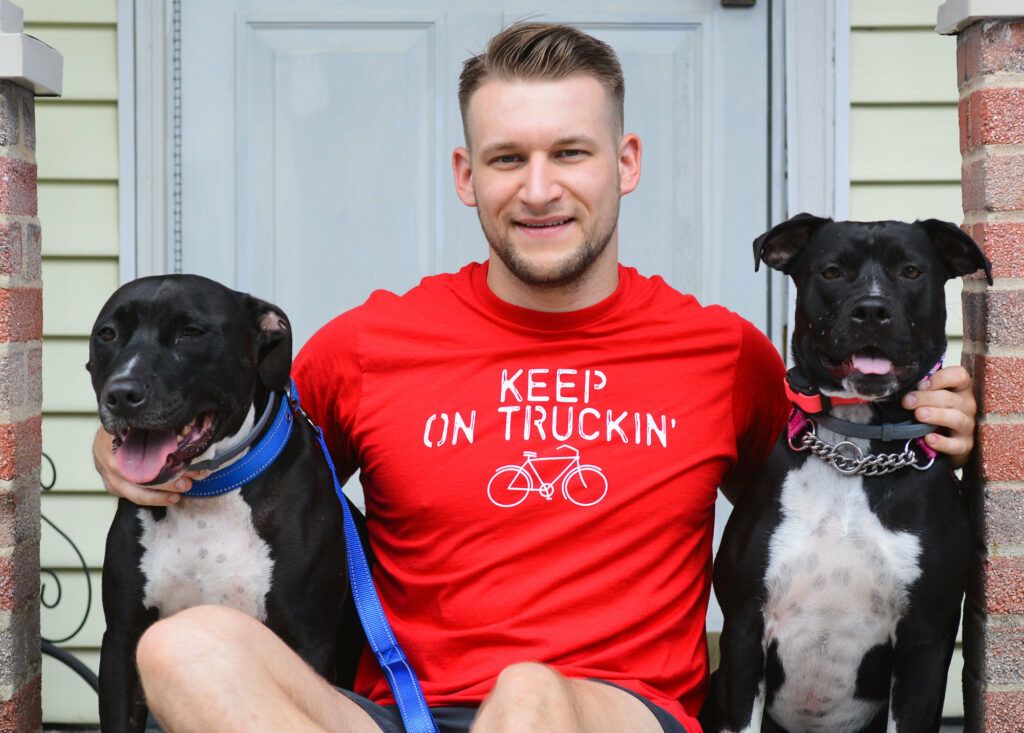 Matulevich sits with his dogs, Kronos, left, a pitbull, and Naomi, a pitbull/lab mix.