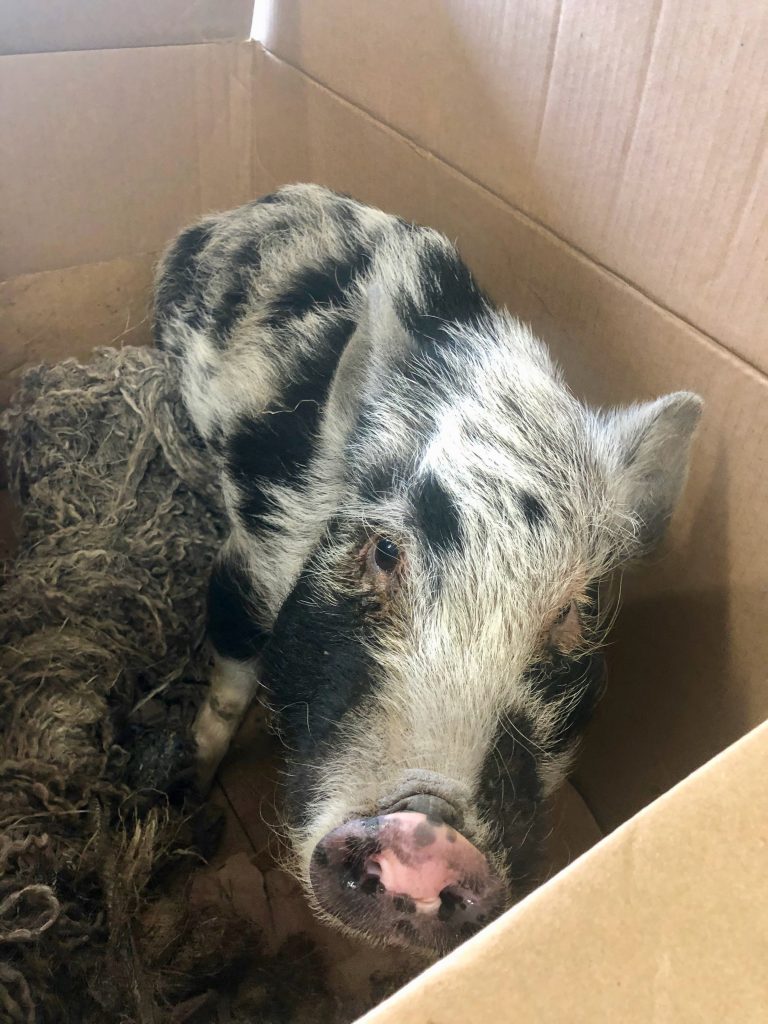 Chandra, a black-spotted pot-bellied pig, is recovering at the Indraloka Animal Sanctuary from surgery after a good Samaritan found him injured Jan. 23 on the side of the Morgan Highway.

“He’s the apple of everyone’s eye this morning,” Indra Lahiri, sanctuary founder, said after the rescue.

A woman was driving down Route 307 in Lackawanna County when she noticed Chandra tangled in the bushes on the side of the road near a cemetery, Lahiri said. The woman flagged down other cars, whose drivers helped her get the injured pig into her car.

She took him to the Griffin Pond Animal Shelter around 1:20 p.m., and workers there rushed him to the Carbondale Veterinary Hospital after noticing there was material embedded in his stomach area and back, said Ashley Wolo, shelter executive director.

“Our hearts broke immediately, just looking at the pig,” she said. “We just knew it wasn’t a good situation.”

The vet surgically removed some sort of metal that was embedded as deep as his muscles, said Lahiri.

Chandra — which is Sanskrit for “moon” and was Lahiri’s father’s middle name — now requires around-the-clock care while he heals from surgery that left a wide, deep wound.

Wolo said that while Chandra appeared scared the night of the rescue, he’s comfortable at the sanctuary’s Mehoopany location and seems to be doing a lot better.

The vet estimated the pig is 5 or 6 years old and about 20 to 25 pounds underweight, Wolo said.

Lahiri said Chandra has other ailments, including runny eyes and issues with his back legs.

The vet said Chandra might never be 100%. With the right help, he’ll recover, Lahiri said.

“We can get him to the point where he will be happy,” she said.

The sanctuary and Griffin Pond are working with their humane officers to identify who injured Chandra and whether there are any other animals suffering similar fates.

To donate for Chandra’s care, visit www.indraloka.org or the sanctuary’s Facebook page.