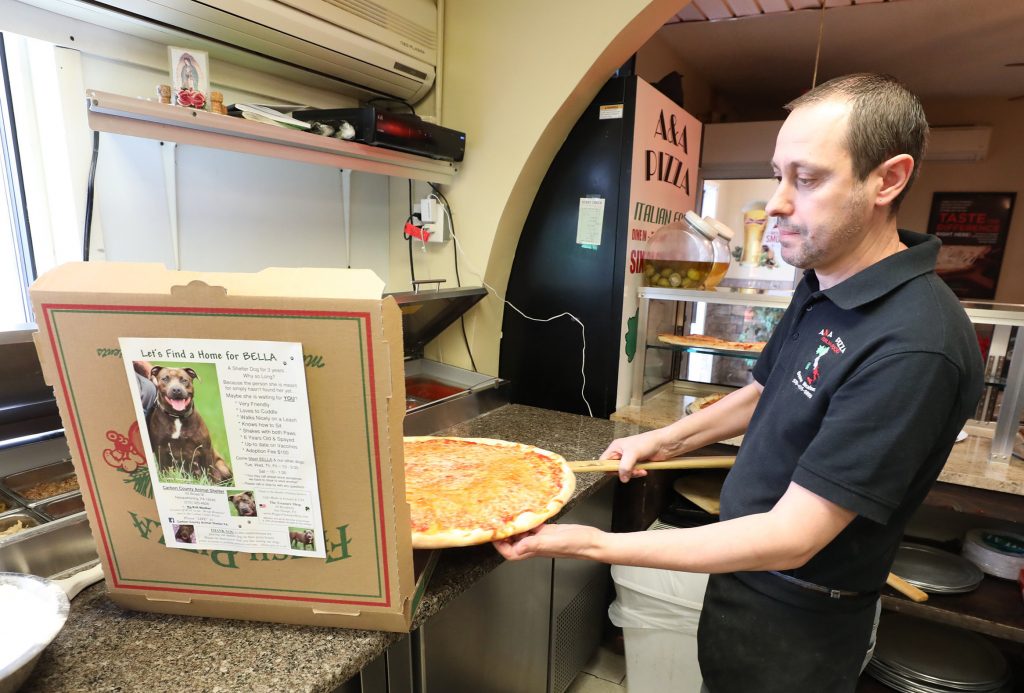 Giulia Cozzi, manager at Lorenzo’s in Lehighton, was the first person to reach out to Connors on Sunday night, he said. She had seen the original story about a New York pizzeria working with a local shelter on social media and had thought that was a great idea, she said.

When she saw Connors’ post on social media looking to do the same, she jumped at the chance to help.

“We would love to do that,” she said about responding to the post. “I was really excited.”

Cozzi has two shelter dogs herself, she said, and “her girls” are best friends. She added that she planned to visit the shelter and talk to Connors more about promotion.

“I hope there are more pizza places that would do this,” Cozzi said.

Pizzette Pizzeria in Tresckow was also immediately on board, said owner Patricia Piazza, who adopted one of her six rescues from the Carbon shelter.

“I’m an animal lover,” she said. “I hate to see them in there. I hate to see people abandoning them here. I just think it’s a good cause.”

Vito Conigliaro, owner of Angela & Adriana Italian Food and Pizza in Beaver Meadows, said his daughter, who is always on her phone, saw that the shelter was looking for help on social media and immediately said, “Yes.”

“I wanted to do it for her,” he said, placing one of the first fliers on his pizza boxes this week. “I like animals and I wanted to do this.”

Connors had seen stories about pizzerias and shelters working together to find animals homes, and when this most recent story surfaced, he decided to gauge interest on social media.

The response was amazing.

First thing Monday, Connors contacted a printer, who could do 1,000 fliers for $165 and found a sponsor, The Treasure Shop in Jim Thorpe, to cover the cost. He said he also hopes to have more fliers ready by the end of the week.

According to Connors, each flier will feature one of the shelter’s longer term residents and the first will be Bella, who has been at the shelter three years waiting for her forever home.

Bella, a pit bull mix, is very friendly, loves to cuddle, walks nicely on a leash, knows how to sit and shakes with both paws, the flier said. She is 6-years-old, up-to-date on her vaccines and spayed.

One of the reasons Bella has been at the shelter so long is her size. She weighs 95 pounds, making her harder to place than a tiny Yorkie or a Pomeranian, Connors said.

But someone is out there for her, he said, but they haven’t met yet. Maybe now they will.

Up to a dozen pizzerias in the area have now contacted Connors, wanting to help, and another business, ETA Benefits in Nesquehoning, has put Bella’s photo and information on its business as well, he said.

The shelter currently has 13 dogs and eight puppies, Connors said. Two litters of puppies came unexpected in December, and the pups, now a little better than eight weeks, are ready to go to waiting homes, he said. One of the mothers, who is still at the shelter, has also found a home.

The other mother, who has been very protective of pups, may be featured on a future flier. Connors had hoped the 2-year-old would have found a home during February, when half-price adoptions were offered for the “Love a Dog for Life” incentive.

Ten dogs were adopted thanks to the promotion during February, which is typically a slow month for adoption, as are all the winter months. Only one dog found a home in January, he said.

Connors hopes to put fliers out on pizza boxes once a month, as long as sponsors can cover the costs, and he even offered to deliver them and tape them down himself. Most places said they would handle putting the fliers on the boxes.

Someone asked what happens if one of the dogs gets adopted while the fliers are circulating. It’s all good, Connors said, because a dog found a home and more people are learning about the shelter, which many people don’t know about despite being off Route 93 on the Broad Mountain next to the Carbon County prison for 20 years.

People, who may already have pets, may want to post the fliers at their workplaces or at a local store, he said.

In the end, Connors hopes people will see the fliers, fall in love with one of the dogs and bring one, or two, home.