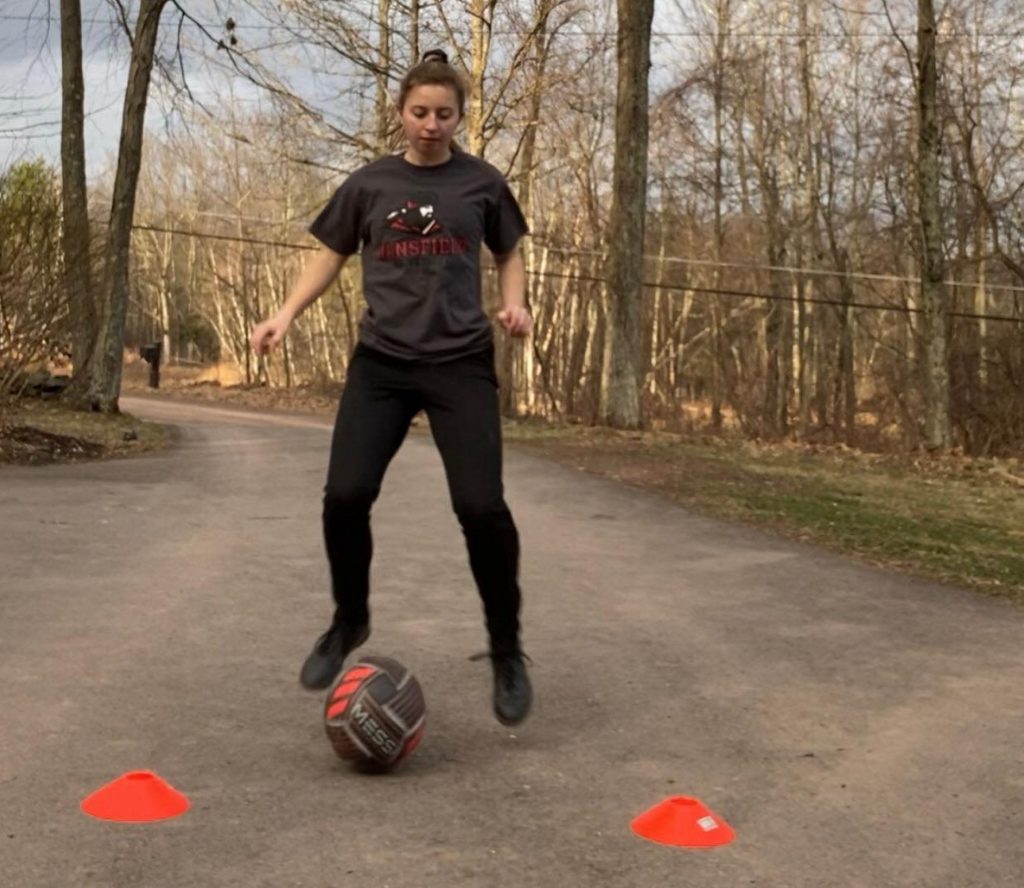 No practice. No game. No problem.

All you need is a soccer ball, a tennis ball, two feet, a few cones and a positive mindset to participate in Northeast United Soccer Club’s 2,500 Touch Explosion, an online challenge designed to keep athletes sharp and in shape during the coronavirus pandemic.

While his athletes would rather play games, club director Chris Litzenberger asks that they treat this time as an opportunity to get better.

“We really believe at Northeast United that hard work pays off,” Litzenberger said. “It’s not necessarily the best athlete that ends up being the best player — it’s the one that works harder. We want to instill that in soccer and in everything they have in life. In these challenges, we try to reiterate those messages.”

The challenge includes 14 different exercises with an emphasis on juggling and dribbling.

Record-holding jugglers in their age groups include Adie Kostik (U-10), of Wyoming, and Lola Wojciechowski (U-13), of Forty Fort, who have each surpassed 3,000 continuous juggles with a soccer ball.

Those numbers are as impressive as they sound, as those players have gone at least 25 minutes without the ball hitting the floor.

Other club members have also seen their juggling scores improve by the hundreds.

Take it from Lake-Lehman senior Emily Smith, a district champion and league-leading scorer who will play soccer at Mansfield University.

No day is complete for Smith without finishing the challenge.

“It gets you very fit. A lot of hard work,” Smith said. “I have already seen improvement.”

The first drill — tennis ball juggling — is one of the most challenging.

Players must juggle the tennis ball on their feet 254 times, though not necessarily in a row. If the ball hits the ground after 10 bounces, for example, the player restarts on No. 11.

“The tennis ball is a smaller object,” Upton said. “The smaller the object, the more specific their accuracy needs to be with touch.”

If a player is able to master the art of juggling a tennis ball, then a soccer ball should be easy.

After completing 254 touches in the tennis and soccer ball juggling exercises, individuals are asked to record 166 touches in 12 other drills, including toe taps and figure eights.

Once they have completed the 2,500 Touch Explosion, which could take as little as 15 minutes and as long as two hours for perfectionists, individuals typically post a video of their workout to a private Facebook group.

Coaches then distribute snippets of those videos to the club’s public pages.

“We do stuff like this every few months where we kind of ask a little more of the kids,” Litzenberger said. “We’ll give them a challenge and a small reward at the end if they complete it. We have a pretty high success rate of the challenges, typically.”

NEU, which operates out of the Forty Fort Soccer Fields and serves both genders from age groups U-6 to U-19, will soon retire the 2,500 Touch Explosion and create new challenges to work on during the quarantine.

Litzenberger said his players are hard workers and that the proof is in the success of these challenges.

“I think it refines technical skill,” Upton added, “and it creates a really solid foundation so they can execute those moves in a game.”

The club has found another interactive way to keep players engaged in which players record videos of themselves juggling, dribbling and kicking the ball off screen.

The next clip shows one of their teammates receiving the pass and then sending it off to the next teammate.

“It’s cool because they cheer each other on and it’s a way to connect,” Upton said.