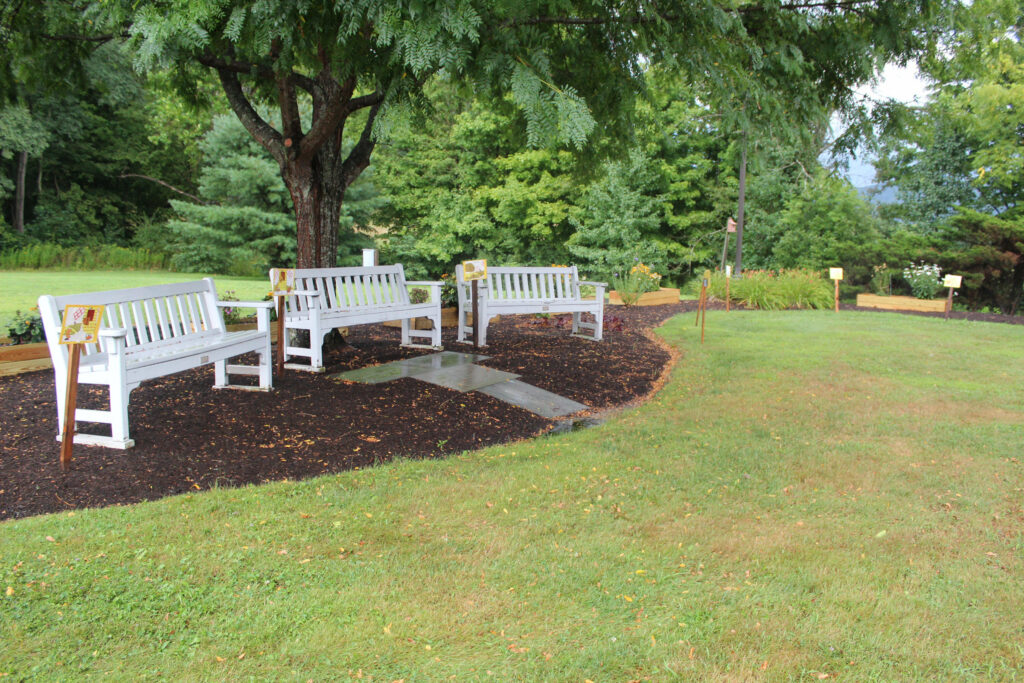 New programs planned as group helps to ‘Take the Library Outside’

Opportunities at Tunkhannock Public Library go beyond the bookshelves.

Graduates of the inaugural class of Leadership Wyoming, a program offered through the Wyoming County Chamber of Commerce, helped “Take the Library Outside.”

“The idea was that we have this beautiful backyard, but it really was being underutilized,” said Tunkhannock Public Library Director Kristin Smith-Gary. “I applied for a grant and Leadership Wyoming of 2017 did a lot of brainstorming and they raised $5,000 to redo the backyard.”

At a reception with the Chamber of Commerce on Aug. 8, library officials got together with Leadership Wyoming graduates who returned to celebrate the completion of the project.

While the project began in 2017, it just recently came together after two years of delays with the help of Neil’s Grounds Maintenance. However, Smith-Gary believes waiting worked out for the best. Originally, the plan was to use the backyard for more intimate activities such as chess and checkers, but library officials realized in the interim that it had a bigger purpose.

Tunkhannock Public Library Program and Marketing Coordinator Angela Hunsinger had plenty of ideas for incorporating fitness programs into the backyard space, so this became the focus instead. Outside of physical activities, the library plans to use pollinator gardens in the backyard for programs about bees and butterflies, inspired by Creekside Gardens and Penn State Master Gardeners. Kids can go on a “story walk” through the backyard with signs posted throughout. Benches and a children’s picnic table have also been placed outside for patrons who want to read in a quiet space or enjoy time outdoors, covering both ends of the spectrum.

However, the original concept from Leadership Wyoming was not forgotten. A recent expansion inside of the library created two study rooms and moved shelves around, creating more sitting space for patrons who want to play games like chess and marbles, or put together puzzles.

“The things that we were thinking might happen outside are happening inside instead,” Smith-Gary noted.

So far, the public has been receptive to the improved backyard, with many sharing compliments with library staff.

“We are beyond thrilled with it,” she said. “It turned out way better than we imagined and it fits our needs.”

Wyoming County Chamber of Commerce President Gina Suydam said seeing how pleased Smith-Gary and others at the library have been with the project has been the best part of the process.

“I think that really with all of the ups and downs and learning that we all had going into this, that’s the outcome we all really wanted,” Suydam said at the reception. “We wanted to create the best outdoor space for you as a library to use and I think you have that now.”

While fundraising for “Take the Library Outside,” she added that the community was quite supportive.

“Everybody wanted to help and I think that really when it comes down to it, that’s what makes Tunkhannock and Wyoming County really great,” she said. “We can all come together and see a need and figure out how do we get it done.”