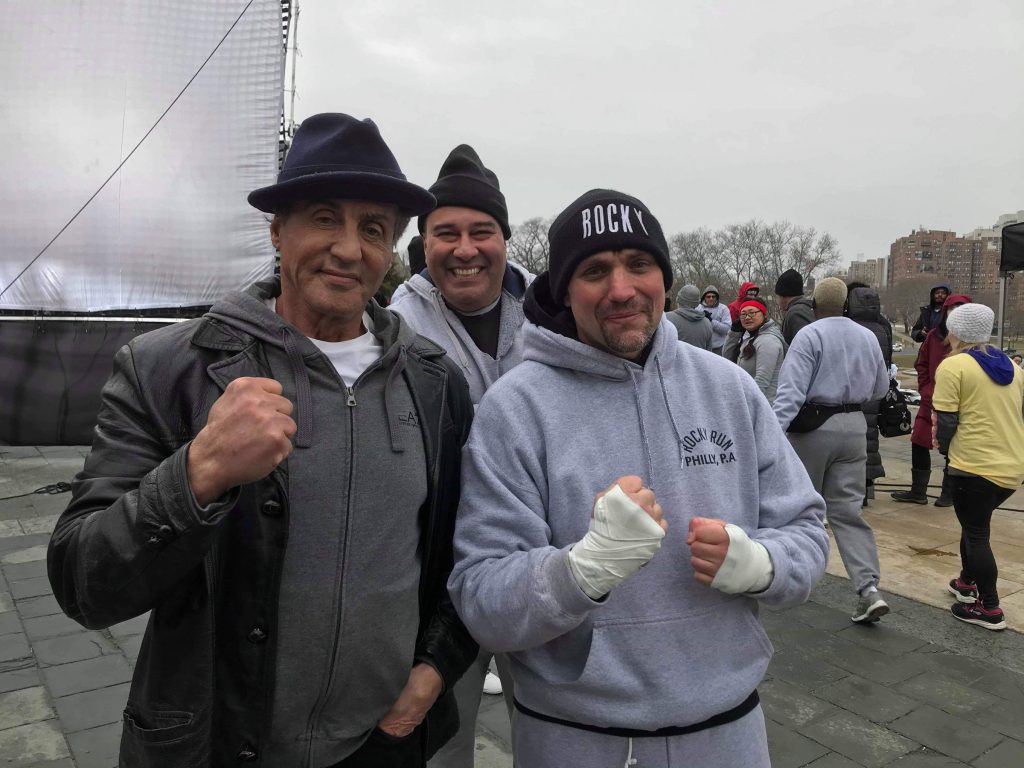 Thanks to a Facebook contest, the amateur boxer from Madison Twp. got to appear with the movie star as an extra in a commercial that will air Sunday during Super Bowl LIV.

Facebook’s first Super Bowl ad will highlight Facebook Groups, which is a feature of the platform for people to share their common interests.

McFadden is a member of the Facebook group “Rocky Balboa Going the Distance” for fans of Stallone. The group, which has more than 2,000 members, was chosen by Facebook in November and its members were encouraged to submit a 30-second video about why they would want to be a part of the commercial.

“I wasn’t going to bother with a video because I thought I’d never get chosen,” McFadden said. “The deadline to submit a video was Dec. 10 and I was driving home that day and I thought ‘I’m going to take a chance and do it.’ ”

In the video, McFadden mentioned he attended the same school as Stallone — Devereux Manor High School for emotionally troubled youths. Stallone was expelled from 14 schools by the age of 13 before attending Devereux Manor. Even though Stallone was at the school decades earlier, the two actually shared the same therapist while there, something McFadden also mentioned in the video.

“I also told them that when I was 10 years old, I didn’t have a lot of hope, but he got out of there and had this great career and he gave us all a lot of hope,” McFadden said. “ A person from the contest called me two hours later.”

McFadden, 43, was offered a flight to Philadelphia to film the commercial, but he said he could make the two-hour drive. He arrived Dec. 15 with filming set for the next day. A hotel room was also provided for him and one other person from the Facebook group that was chosen, Jim Vazquez of North Carolina. McFadden is not allowed to reveal what will be in the commercial, but they had to be on set at

6:15 a.m. and some filming took place on the steps outside the Philadelphia Museum of Art that Stallone ran up as Rocky Balboa in the “Rocky” movie franchise.

“We still didn’t know Stallone was going to be there, but then he came out of his tent,” McFadden said. “He was great. When there would be a break, he wouldn’t be over with the director, he’d come down to the crowd and take selfies with everyone there.”

McFadden did get the opportunity to meet Stallone.

“I met him and shook his hand, which I had wanted to do since I was 10 and I thanked him for the hope that he gave me,” McFadden said. “I wanted to tell him my story and he stood there and listened. We even talked about our therapist. He said Devereux was a weird place when he was there in the 60s and I said it was still weird when I was there in the 80s. He got sent there for stealing a car and a lot of us were in there for the same reason and he made it.

“When someone would say we weren’t going to be able to do anything, we looked to him as inspiration.”

Filming for the commercial wrapped at 5 p.m. and then McFadden and Vazquez were interviewed as part of a behind-the-scenes documentary by Facebook that will appear on the social media site in the days leading up to the Super Bowl.

“It was incredible,” McFadden said. “I’m sure if you’re a film extra, you’re used to it. But for me, getting to watch Stallone, who was a childhood idol of mine, was incredible. Ten hours of filming went so quick. It was cold, snowing and I would have stood there for 20 hours.”