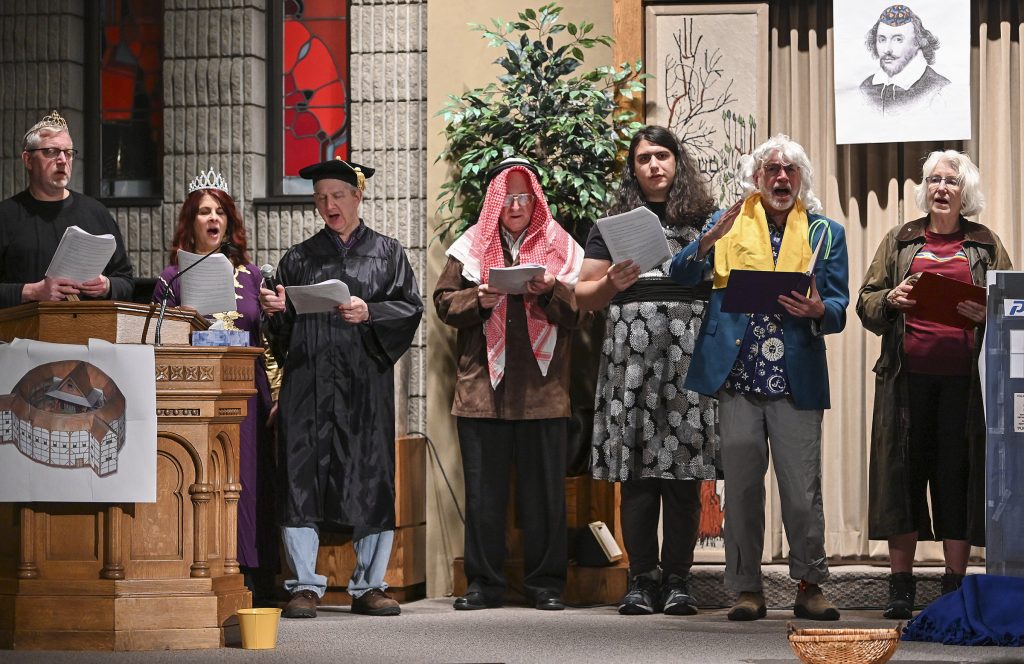 Although one of the Jewish faith’s most joyous holidays doesn’t begin until sunset tonight, Jewish communities have already spent the weekend celebrating Purim.

The holiday celebrates a Jewish woman named Esther who saved her people from Haman, a xenophobic adviser to an ancient Persian king, said Rabbi Daniel Swartz of Scranton’s Temple Hesed. The celebrations, which include plays, carnivals and feasts, stem from the Book of Esther in the Bible.

In the book, the king holds a contest to find a wife and selects Esther, who hides her Jewish identity, Swartz said. Haman orders that everyone must bow down to him, but Esther’s cousin, Mordecai, refuses. So, Haman decides to get revenge by killing all of the Jews, he said.

Esther reveals she is Jewish to the king and tells him what Haman intended to do, leading to the king executing Haman, Swartz said.

Esther is written satirically with an over-the-top style, and Jews have used Purim as a way of celebrating triumph over times of trial, as well as poking fun at anything over the ages, whether it’s leadership in the Jewish community, the wealthy or non-Jewish overlords, Swartz said.

“There really is something very healthy about having a holiday where you can poke fun at things, whether that’s being able to poke fun at authority … or poking fun at yourself and making sure that you don’t take yourself too seriously,” Swartz said.

“Sometimes we have to laugh at things in order to be able to handle them and to go on and change things,” he said. “Haman is a very serious threat, and he’s also made fun of.”

They eat hamentashen, a triangular pastry that pokes fun at stories of Haman wearing a similarly shaped hat, he said.

Jews dress in costumes as they retell the story, using Haman as an anti-Semitic archetype they apply to current times, he said. At Temple Hesed, they retold the Book of Esther on Saturday with a play that Swartz wrote. In the play, a young William Shakespeare has writer’s block and is transported back in time by a time traveler named “Dr. Wherefore,” a cousin of Dr. Who, to see the biblical book unfold.

Purim is the most joyful Jewish holiday, said Rabbi Benny Rapoport of the Jewish Discovery Center in Waverly Twp. The whimsical behavior and traditions are rooted in joy, he said.

“The question is, why is it so joyous?” Rapoport said.

It celebrates the connection that every Jew has with God as the Jews were saved from annihilation, he said. Unlike Hanukkah, where Greeks attempted to wipe out Jewish culture but not kill the Jewish people, Haman sought to kill every Jew, regardless of their faith, Rapoport said.

“The material Jewish person was threatened and was saved,” he said.

As a result, festivities center around physical celebrations — eating, drinking and toasting.

He pointed to four traditions: reading of the story of Esther, giving food to friends to spread the love and cheer of friendship, giving to the poor or other important causes, and feasting.

On Tuesday, the Jewish Discovery Center will celebrate Purim with “Purim 2020 in the Roaring 20s,” asking attendees to put on their fake fur, top hats and vintage attire as they enjoy a five-course dinner.

Dan Cardonick, executive director of the Jewish Community Center in Scranton, estimated the JCC has celebrated Purim with a carnival for at least 20 years. They held their carnival Sunday and generally have about 250 to 300 people attend, he said, calling it one of the most raucous, celebrated, festive and fun Jewish holidays.

The carnival includes games and prizes relating to Purim, as well as a costume contest, Cardonick said. He related the popularity of costumes on Purim to Esther disguising her Jewish heritage.

“I like to call it the quintessential Jewish holiday,” he said. “They tried to kill us, they failed … the Jews persevered. Let’s eat and have fun and celebrate.”