Hunter, podcast host puts teaching others in his sight

Mark Misura Jr. remains a son of the wild.

A perpetual student of nature, Misura has learned lessons from the woods since before he could talk. Around 8, he went hunting with his dad, Mark Sr., for the first time and soon was hooked. A life of outdoor activities followed, and six years ago, Misura sought to create a community of those who loved the sport as much as he did. And he hoped to find some new fans along the way, too.

Today, Misura owns Sons of the Hunt, a lifestyle brand and media company he founded in which he shares everything from his latest excursions in the woods, education, interviews with other outdoor pros and fans on the “Sons of the Hunt” podcast he co-hosts with Jay Rodney, recipes incorporating wild game and more. The backbone of Misura’s message is conservation, and he imparts lessons to hunters to stay mindful of the ecosystem and how we fit into it.

Hunting is an art, Misura explained.

“There’s so much more to hunting than just killing,” he said recently from the Lenoxville home he shares with his wife, Bridget. “There’s lot to be had there. Killing is a big part of it but not the whole thing. I tried to create something that connected everything it’s about. I wanted to kind of encapsulate everything it means to hunt into one and just tell good stories. … There’s some pretty captivating stories to be told.”

In 2014, Misura was working several part-time and odd jobs that were mentally taking a toll on him. He wanted to focus his energy on something creative that made him happy, so Misura began filming his hunts and documenting his outdoor adventures. While he’d seen many similar hunting programs, he sought to fill a void he noticed by telling the stories of why he hunts. Misura, who prefers bow-hunting, said the sport provides lessons about nature and ones to take into everyday life. Hunters learn patience thanks to the long stretches of time they sometimes wait for the right opportunity to shoot, and stamina because of the sometimes brutal weather conditions they endure. They also learn how to remain calm when the pressure’s on and how to think on their feet.

“Those are real character-building moments out in those woods,” Misura said. “There are times at my job I’m in a high-pressure situation and I’ve got to keep my cool. Those are skills I honed out there.”

Misura began by releasing videos of himself hunting as well as blogs that he enlisted his English teacher mother, Patricia, to proofread. He taught himself how to film and edit video and do his own graphic design work for Sons of the Hunt, calling on professionals and friends like local designer Bryan Filarsky for help. With consistent content, Misura started to build a following.

The podcast came about as a way for Misura to create content in the off-season. He teamed up with Rodney, whom he met through a different hunting platform he contributed to, and said they provide a great balance as hosts.
“I think his personality compliments mine in the best way,” Misura said. “(Rodney) is a little bit more outspoken and bubbly. There’s never any dead air, and I think it’s the perfect combination.”

As the content began to grow and change, Misura started to blend in his other interests, including cooking (both he and Rodney have restaurant experience) and beer.

Education also is a huge part of Sons of the Hunt, including touching on misconceptions about hunting. While “Sons and Daughters of the Hunt” sounded too cumbersome, Misura insisted that neither his content, nor hunting, is gender-specific. Though it’s a male-dominated sport, plenty of women hunt. His dad also took Misura’s sister, Rosanna, hunting from when the siblings were small. And Misura’s wife grew up fishing, a sport the two enjoy together. She’s also been out hunting with her husband a handful of times with plans for more.

Another thing people get wrong about hunting is thinking that it’s a cruel practice, according to Misura. Humans are capable of higher thought, he noted, and therefore it falls to them to care for and protect animals. Without proper population management, sickness and starvation can occur. Regulating the harvest assures plenty of food exists, Misura said, which in turn guarantees that more animals reach their potential.

“(Rodney) comes from the conservation side of (hunting), and it’s something we’re always trying to get across in what we do,” he said.

Those who know Misura best know he’s always forged his own path on his own terms. His mom recalled the time when she and her husband told their then-4-year-old son that he needed to wait until he was with an adult to go swimming. Not wanting to wait for anyone, though, Misura jumped into the water on his own. As his father pulled him out, he asked the boy why he jumped in.

“He said, ‘I knew I could do it,'” Patricia Misura said, laughing. “That’s really kind of been his attitude his whole life. He’s always been confident – never cocky – but he’s always self-assured and believes in himself no matter what.”

All of his education and work background has helped him become a well-rounded interviewer and content creator, he said, and he strives to put his all into his work. He attended Carbondale Area School District and graduated from Scranton Preparatory School, then enrolled at University of Scranton on the pre-med track. That didn’t feel like a good fit for him in the end, so he switched to biology, where he learned about ecology, evolution and more.

After college, he worked at a regional environmental engineering firm and today has a job with Pennsylvania American Water.

His wife has been by his side every step of the way, Mark Misura said, and he couldn’t have done it without her support. While she’s amazed by what Sons of the Hunt has turned into, she’s not surprised.

“Now that more people are hearing of him and the word is getting out about (Sons of the Hunt), it makes me so happy to see him be recognized for the work he’s put into it,” Bridget Misura said. “People don’t see those hours behind the scenes, and that’s a huge part of it. He works so hard and really puts everything into this.”

Interested in social media strategies, Mark Misura studies trends and patterns to plot his next move. He’s building a bar that doubles as a podcast studio in his basement while also making sure he gets in the woods as much as possible. It doubles as self-care, as Misura said there’s nothing better than heading into the woods to clear his mind after a long day.

Even if someone isn’t interested in hunting, he encourages everyone to get more familiar with the outdoors. After all, it’s second nature to us.

“That’s where we started,” Misura said. “Everything you need is in the woods, and that’s what I live by. All I hope I can do is get them to experience it for themselves.”

Residence: Lenoxville
Family: Wife, Bridget; parents, Mark Sr. and Patricia; sister, Rosanna
Education: Graduate of Scranton Preparatory School and University of Scranton
Claim to fame: A lifelong hunter and outdoorsman, Misura founded and owns Sons of the Hunt, a lifestyle brand and media company that produces videos, blogs and a podcast all about the art of hunting through a lens of conservation, ecology and respect for nature.
Online: Sons of the Hunt on Facebook and YouTube;  @sonsofthehunt on Instagram; “Sons of the Hunt” on Apple Podcasts, Spotify and Google Podcasts 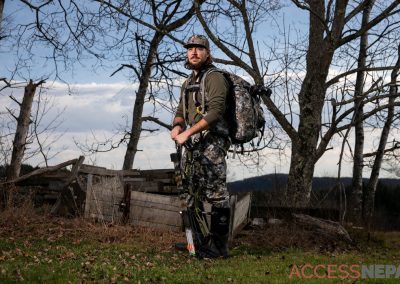 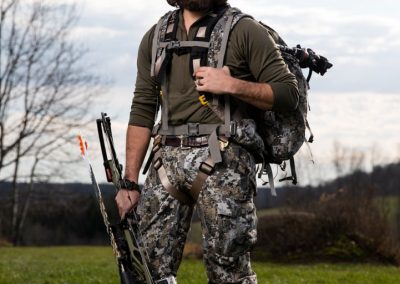 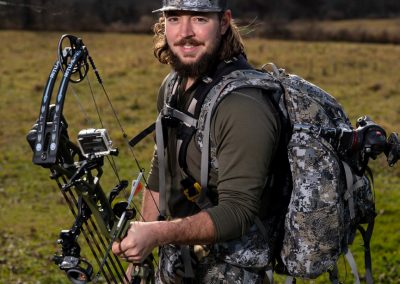 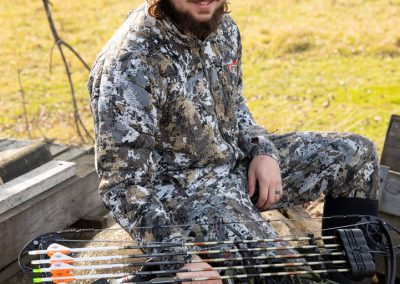 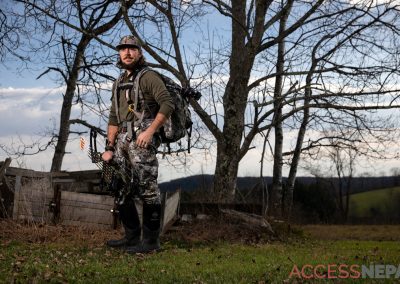 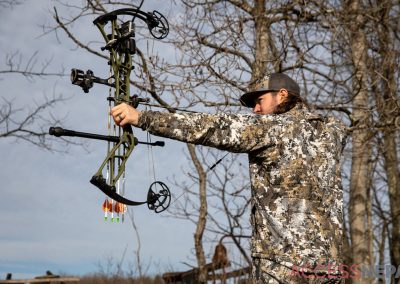 Sons of the Hunt media company owner Mark Misura Jr. of Lenoxville holds one of his hunting bows on a hunting property in Kingsley on Friday, Nov. 20, 2020. Christopher Dolan/Staff Photographer 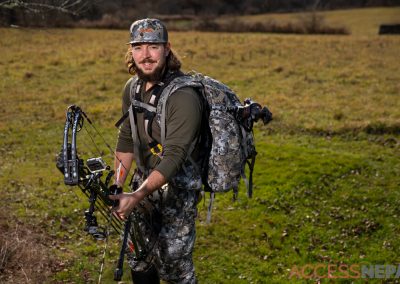 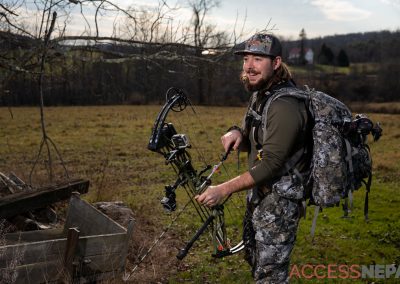 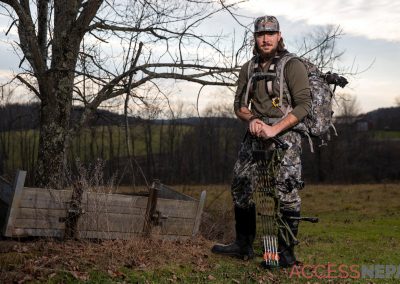 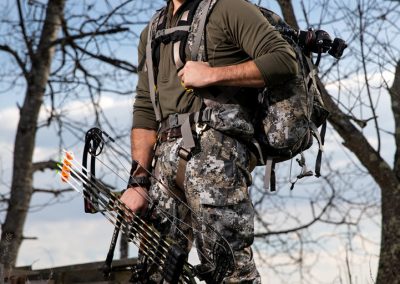 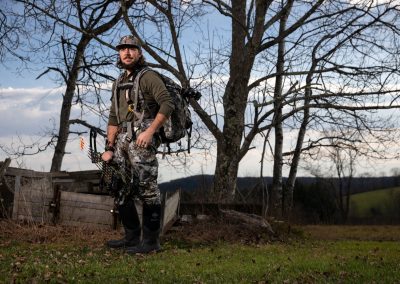