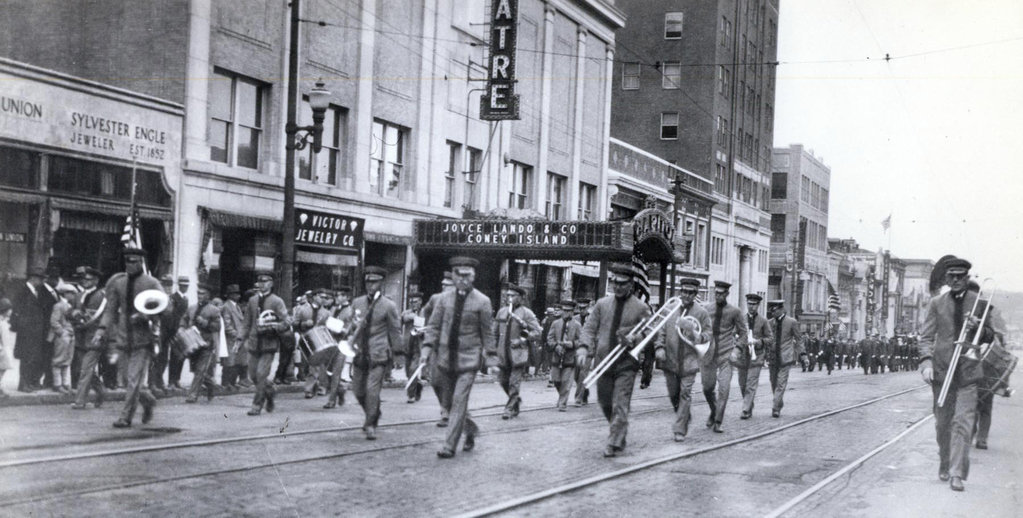 A band that can trace its roots back to the Civil War will celebrate its 160th anniversary with a concert Sunday at the Pennsylvania Theatre for the Performing Arts, 212 W. Broad St., Hazleton.

The Hazleton Liberty Band will play a wide variety of selections beginning at 3 p.m. with the national anthem and two marches, its own “Hazleton Liberty Band March” and J.F. Wagner’s “Under the Double Eagle.” The starting selections are fitting because long-gone band members had been soldiers/musicians during the Civil War and had played together in Appomattox, Virginia, on April 9, 1865, when Gen. Robert E. Lee formally surrendered to Union Gen. Ulysses S. Grant.

According to records, they played “Auld Lang Syne” after peace terms were signed and Lee and his aides rode their horses out of Appomattox to inform their troops that the war was over.

As for the anniversary concert, the band will play highlights from Walt Disney’s “Mary Poppins,” including “A Spoonful of Sugar,” “Chim Chim Cher-ee,” “Stay Awake” and “Supercalifragilisticexpialidocious.” John Phillip Sousa’s march, “The Fairest of the Fair,” will be followed by the melodic “March of the Belgian Paratroopers.”

The Sinatra in Concert portion of the concert will include “Theme from New York, New York,” “It Was a Very Good Year,” “The Lady is a Tramp” and “My Way.” These will be followed by “The Liberty Bell” and “Military Escort” marches.

A cartoon symphony will feature “This is It (Theme from ‘The Bugs Bunny Show’),” “(Meet) The Flintstones,” “The Jetsons,” “The Pink Panther,” “Animaniacs” and “Merrily We Roll Along.” Henry Fillmore’s “Americans We” march will precede Sousa’s “King Cotton” march.

A tribute to (George and Ira) Gershwin will include “I’ve Got Rhythm,” “’S Wonderful,” “Embraceable You,” “Fascinating Rhythm,” “The Man I Love,” “But Not For Me,” “How Long Has This Been Going On,” “Oh, Lady Be Good,” “Someone to Watch Over Me,” “Swanee” and “Rhapsody in Blue.”

The “Beer Barrel Polka” will be followed by the Symphonic Beatles portion which will highlight “A Hard Day’s Night,” “Yesterday,” “I Want to Hold Your Hand,” “Michelle” and “Hey, Jude.”

The concert will conclude with Sousa’s “The Stars and Stripes Forever March.”

John Zehner, director, said the band is always looking for new members. He invites interested musicians, young and old, to speak to him or any band member following Sunday’s concert. Rehearsals are held Mondays at 7 p.m. in the PTPA center.

The Liberty Band began as Gleim’s Band of Hazleton, which was organized in 1859. Five of the members were part of the 198th Pennsylvania Volunteers and musicians affiliated with the Band of the First Brigade, which was part of the First Division of the Fifth Army Corps. They had participated in the battles of Bull Run, Cedar Mountain and Fredericksburg.

When their two-year enlistments ended, five reenlisted and saw action at the battles of Petersburg, Richmond and Appomattox.

After the war ended and before they were mustered out of the Army, the Hazleton men played at the funeral dirge of President Abraham Lincoln. They later participated in the Civil War Victory Parade before new President Andrew Jackson.

The veterans performed in the National Firemen’s Parade in Philadelphia by providing music for the Liberty Fire Co. of Reading. They were chosen the best of the 265 participating bands.

When the men returned home, they changed the name to the Hazleton Liberty Concert Band. The band later performed at the nation’s centennial celebration in Philadelphia and at a 1882 reception for Grant.