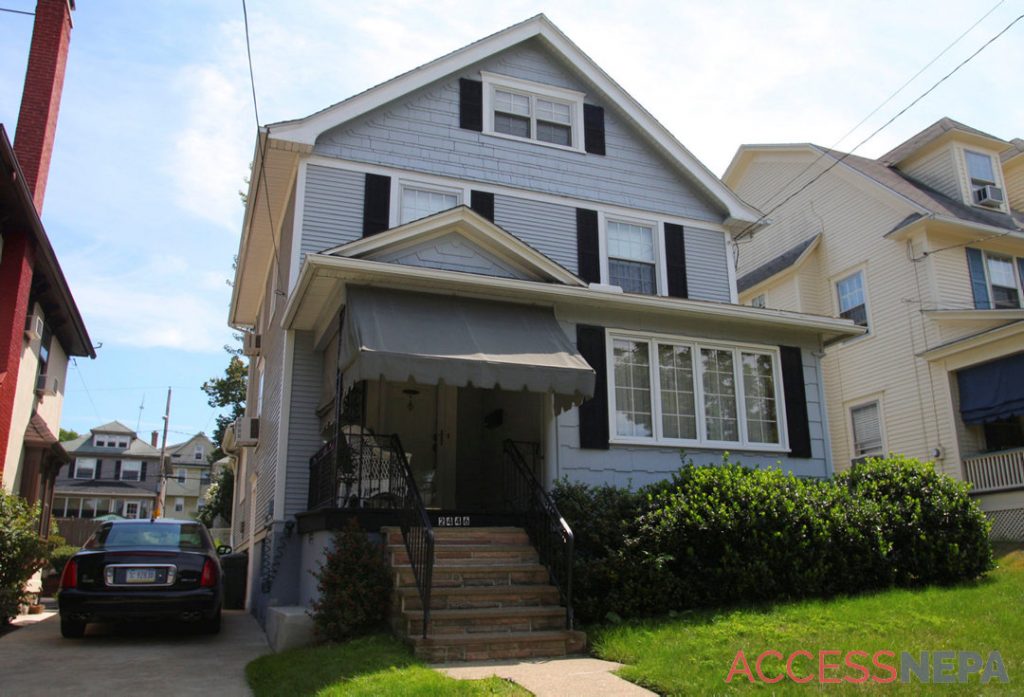 ‘From this house’: The storied past of Joe Biden’s childhood home

The Scranton home where President Joe Biden spent a good deal of his youth has a storied past, including a tie to the nation’s first president.

Today, 2446 N. Washington Ave. stands in one of Scranton’s nicest and wealthiest neighborhoods at three floors tall with a basement, five bedrooms, two bathrooms and hardwood throughout. Like all land developed for housing, it started out as a vacant lot — 40 feet wide in front, 150 feet deep — in a development known as the “Moore and Reynolds Addition to the City of Scranton.”

The first available record, a plan filed Nov. 25, 1896, with the Lackawanna County recorder of deeds office, shows the land as Lot 4.

The precise year of the home’s construction is unclear, but 1923 or 1924 appear the likeliest.

The 1923 Polk Directory of city residents and streets does not show anyone living at 2446 N. Washington, but does show people living in homes around it.

The first available deed, dated Aug. 24, 1923, shows George B. Dimmick and his unnamed wife sold the land for an unknown amount to Frank M. Keane on Aug. 22, 1923. Dimmick — his marriage license says he was a bank teller married to the former Elizabeth Hitchcock — was the son-in-law of Col. Frederick L. Hitchcock, who wrote an early history of Lackawanna County published in 1914. Dimmick designed homes as a hobby and was known for his work in various places across the city, according to his February 1946 obituary. It is unknown if he designed the Biden home, but Dimmick Avenue is an alley behind the home where one of Biden’s best friends, James Kennedy, later lived.

Keane, who lived next door at 2448 N. Washington with his wife, Agnes, served as an assistant to the president of famed Scranton-based International Correspondence Schools.

The Aug. 24, 1923, deed shows Keane sold the property that day to William E. Bright for $1. Bright, a former co-owner of the Scranton Textile Co., which he sold a few years earlier, went into real estate development. He later served as a Scranton school director, district manager for Gulf Oil Co., president of the Green Ridge Bank and president of the AAA Motor Club of Northeastern Pennsylvania.

Bright did not own the land long, but he may have had the house built.

On Dec. 1, 1923, Bright and his wife, Ruth, sold the land to Edward F. Gibbons and his wife, Anna. The deed says the sale was for $1, but a newspaper account shows the price as $11,000. That price would appear to reflect the presence of a home. Gibbons worked as a Postal Service clerk, according to the 1924 directory. 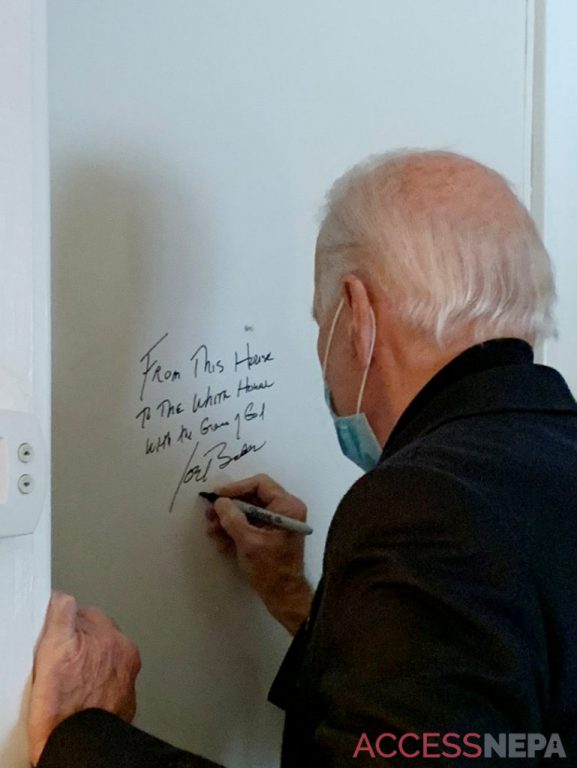 The first mention of someone living at 2446 N. Washington Ave. comes in the 1924 Polk Directory, which lists Edward Gibbons. For unclear reasons, an April 28, 1924, classified advertisement shows the home as available.

The 1925 and 1926 city directories show the Gibbonses living there, but they didn’t own the home long. On Sept. 30, 1926, they sold it to John and Hannah Moylan of Olyphant, again for $1. The actual price could not be determined.

John Moylan was a blacksmith and expert mining equipment mechanic for the Hudson Coal Co. Born in Canaan, Wayne County, in 1861, Moylan died at age 83 in February 1945. He was a “collateral descendant” of Col. Stephen Moylan, an aide to Gen. George Washington at Valley Forge during the Revolutionary War, according to his obituary. Washington was one of the nation’s Founding Fathers and the first president.

Moylan was also a first cousin of Capt. David Moylan, a commander of a cavalry troop wiped out with Gen. George Custer by Native Americans at the Battle of the Little Bighorn in Montana in late June 1876, according to Moylan’s obituary.

The 1935 city directory is the last to show the Moylans living there. The Moylans continued to own the home, but apparently began renting it to others. The 1936 and 1937 street directories show the home’s residents as Warren S. Davies and his wife, Dorothea. Davies managed the Sonotone Scranton Co., which sold hearing aids, and later worked as a salesman for Rodgers Motor Lines, a trucking company.

By 1938, attorney Paul H. Maxey and his wife, Margaret, lived in the home, according to the city directory for that year. Born in Forest City, Maxey served as an assistant district attorney between 1930 and 1934, under Lackawanna County District Attorney John Owens, a Republican, who lost the 1933 election to Democrat Michael J. Eagen. Eagen’s 607-vote victory set the course for decades of Democratic domination of county politics. 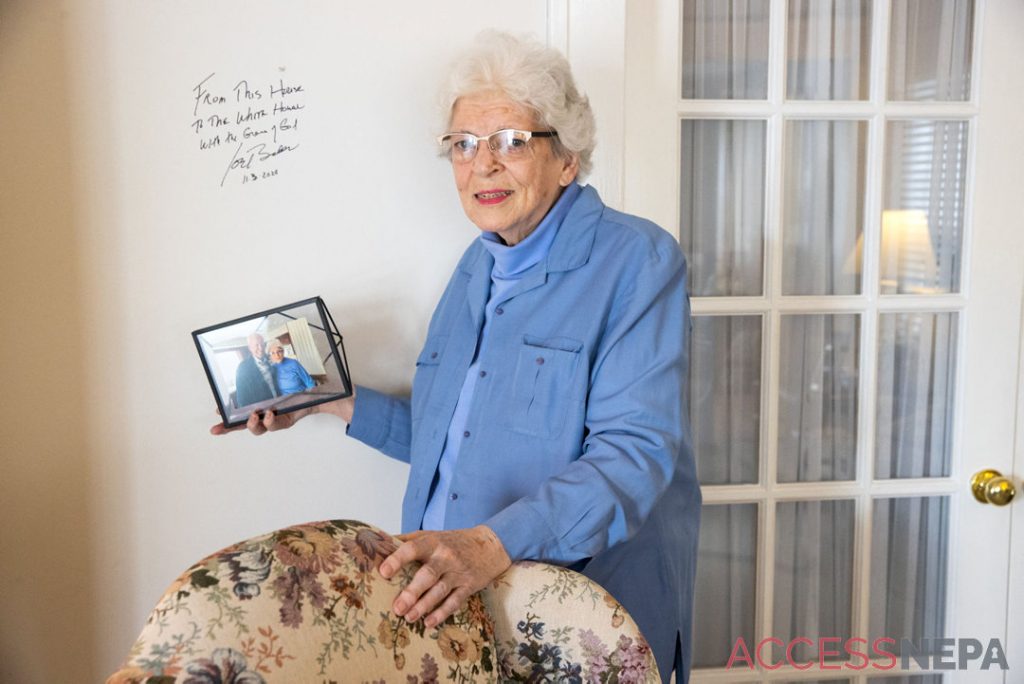 CHRISTOPHER DOLAN / STAFF PHOTOGRAPHER
Anne Kearns holds a photo of herself with President-Elect Joe Biden near a note he wrote on the wall of her home – his childhood home – on North Washington Avenue in Scranton on Jan. 7.

First tie to the Bidens

The next available directory covers 1942 and 1943, and shows the home’s first tie to Biden’s family.

The directory shows Biden’s maternal grandfather, Ambrose J. Finnegan, and his family living there. Finnegan, an advertising salesman and later a librarian for the former Scranton Tribune, married Geraldine C. Blewitt, the daughter of former state Sen. Edward Blewitt, a former city engineer and a founder of the group that evolved into the Friendly Sons of St. Patrick of Lackawanna County. The directory shows seven people living there, but only five Finnegans are listed in the city directory.

Biden was born Nov. 20, 1942. His birth announcement, published in The Scranton Times on the date of his birth, shows he was born in St. Mary’s Hospital, the son of Joseph R. Biden and his wife, the former Jean Finnegan, of Baltimore, Maryland. St. Mary’s was on Hickory Street in South Scranton.

At that time, the Moylans owned the home. Hannah Moylan died in September 1940. The home passed through the hands of several of their children. John Moylan died in February 1945. On Aug. 6, 1945, the Moylans’ son, John Kenneth, his wife, Marjory, and their daughter, Hazel, sold the home to Ambrose and Geraldine Finnegan for $6,250.

The Finnegan family held onto the home for the next 17 years. By 1947, when Biden’s father was broke, the president-elect, his sister, Valerie, and their parents had moved in with the Finnegans. They lived there until he was 10 years old, Biden said in his book. That would be 1952 or 1953, when the Bidens moved to Delaware because Joseph R. Biden Sr. found a job.

In his book, Biden said Edward Finnegan came to live with the Bidens in Delaware after his father died and stayed for 17 years.

Anne Kearns, a widow, whose maiden name is Ratchford, still owns the home and lives there. She and her husband raised six children there.

Kearns said she and her husband lived in the nearby Park Gardens, still a Scranton Housing Authority development. With three kids already and another baby on the way, the Kearnses needed more than a four-room apartment.

“It was just too crowded down there,” Kearns said. “So, I used to walk around the block with the carriage and the kids and I was looking for something around here only because there were so many kids and nice families around here. And, I thought I’d like to stay in Green Ridge. My neighbor, who is still my neighbor over there, Marj Grady, she told me the house across the street is for sale and it didn’t seem to have a big sign on it or anything.”

A brother investigated and found the house available.

“It was big enough for me but it had to have a lot of things done to it,” she said. 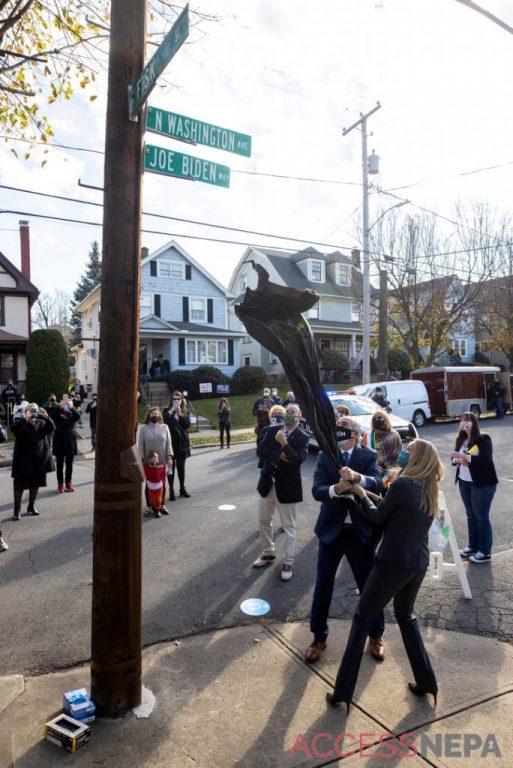 ACCESS NEPA FILE
The intersection of Washington Avenue and Fisk Street in Scranton has been renamed Joe Biden Way in honor of the incoming president, whose childhood home is nearby.

An architect uncle told her the house was in bad shape, but thought “it’s good old wood in here.”

“So, he said it’s a bargain and you won’t get a bargain like this,” Kearns said. “So we bought it and we’ve been very happy here.”

Over the years, Biden has visited the home at least 13 times, said Martin Kearns, one of Anne Kearns’ sons. The president-elect has come inside during public visits at least twice. On Sept. 1, 2008, he pulled out a Sharpie and wrote “I Am Home, Joe Biden, 9•1•08” on the wall of the third-floor bedroom where his beloved aunt, Gertrude, slept. He visited with his granddaughters, Natalie and Finnegan Biden, on Election Day 2020. On the living room wall, he wrote “From this house to the White House with the Grace of God, Joe Biden, 11-3-2020.”

Anne Kearns’ husband used to tell her to hang on to the home because he expected Biden would go places. She’s had offers for the home already, she said.

“Oh, blah, blah, blah,” she said. “And there’s only one problem with that. They’ve got to carry me out of here first.”