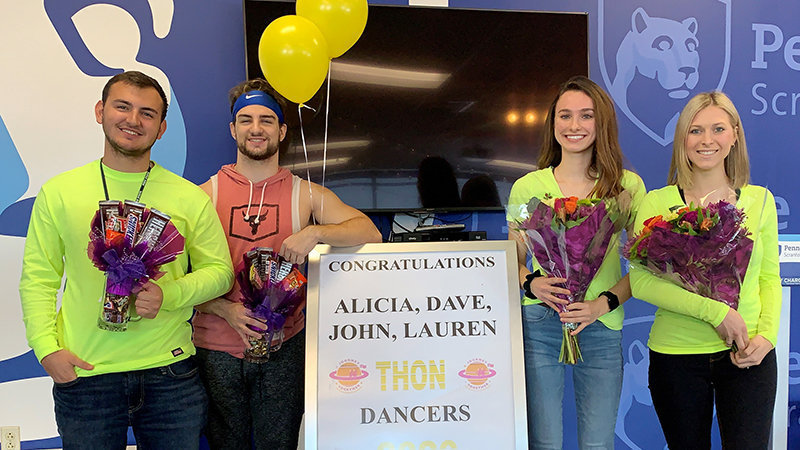 They will join more than 700 other Penn State students from throughout the commonwealth on Feb. 21 at the Bryce Jordan Center for the 46-hour dance marathon, which raises money for Four Diamonds at Penn State Health Children’s Hospital in Hershey.

Four Diamonds’ mission is to conquer childhood cancer by assisting children and their families through superior care, comprehensive support and innovative research.

THON has raised more than $168 million for families affected by pediatric cancer since its inception in 1973. More than 16,500 student volunteers have taken part in the event.

This year, the Penn State Scranton THON chapter is aiming to raise $35,000 for the cause. It is about halfway to that goal.

The THON dancers were chosen based on their fundraising success and the results of an interview with a campus committee.

“The interview was so nerve-wracking. When I walked into it, I said, ‘I just want to be honest, I’m really nervous right now.’ But I guess it went really well,” said Rzucidlo, a nutrition major. “I’m really excited. It’s a real honor to be doing this.”

Rzucidlo was inspired to get involved in the cause after watching several relatives and family friends battle cancer. Her desire only grew after attending THON 2019.

“It was just such an incredible thing to be a part of,” she said.

Santarsiero had a similar epiphany while watching from the Bryce Jordan stands last year.

“I really fell in love with it and just wanted to do more for the cause. So, this year, I got more involved, and here I am now,” said Santarsiero, a human development and family studies (HDFS) major. “I’m really excited to dance for our THON family and all the families involved in THON. And it’s really exciting to be doing it with all of my friends.”

Despite this being his first year at Penn State, Squatrito already knew plenty about THON, having watched his sister serve as a dancer last year.

In addition, he had been involved with his high school’s dance marathon fundraiser. Of course, at 12 hours in length, it pales in comparison to the stamina and fortitude he’ll need to get through the no-sitting, no-sleeping, 46-hour THON. With that in mind, he’s been hitting the gym several times a week.

“I just knew going into my freshman year that I wanted to be super involved in it,” said Squatrito, a mechanical engineering major. “You stand there for 46 hours, and you feel the pain, but it’s nothing like what the kids go through. I just want to be able to help them.”

For Jobs, an accounting and finance major, THON will make for the perfect capper to his Penn State Scranton career.

“It’s something I’ve wanted to do for the past four years,” he said. “I can’t wait.”