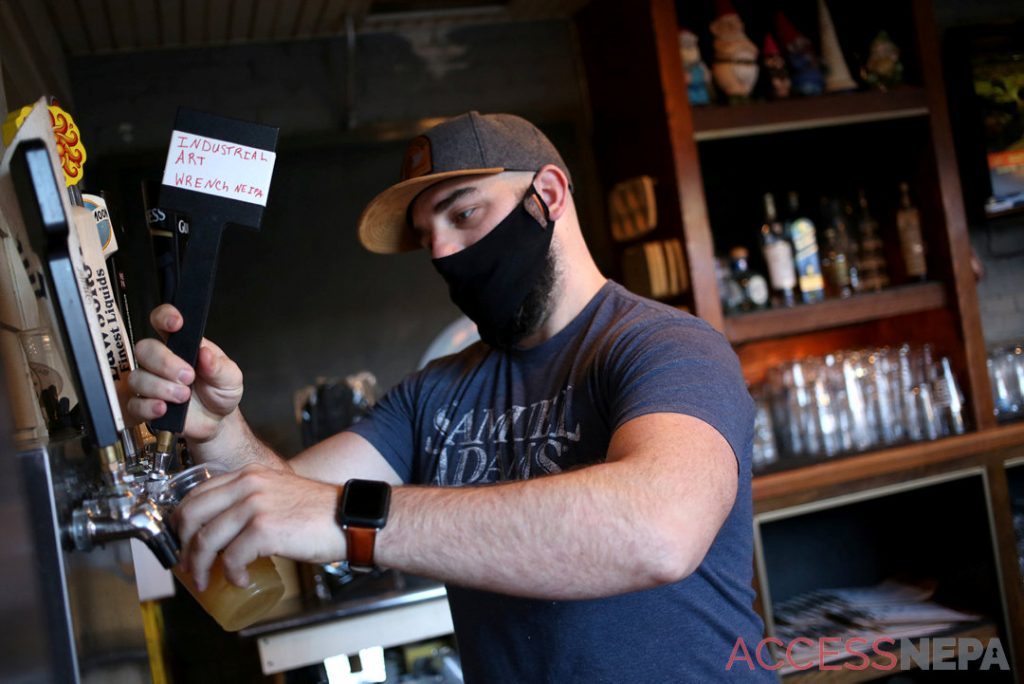 For some restaurants and bars, new state rules are a mixed bag

BY JEFF HORVATH AND DAVID SINGLETON

For Backyard Ale House in Scranton, any benefit of the state allowing increased indoor seating capacity is outweighed by a newly imposed 11 p.m. cutoff for alcohol sales.

Gov. Tom Wolf’s latest COVID-19 mitigation rules, which went into effect Monday, allow restaurants and bars to increase indoor capacity from 25% to 50% as long as they submit a certification form promising to comply with state restrictions. Those establishments had been limited to 25% capacity since July, when Wolf imposed tighter restrictions on restaurants, bars and large gatherings amid a resurgence of coronavirus cases.

“If we can be open as a restaurant up until 5 o’clock, 6 o’clock, 7 o’clock — we can operate with rules and measures in place that protect people at those hours — then why can’t I do that at midnight?” Nasser said. “There’s an assumption there I think, or maybe a precedent set by other places, that things get awry after a certain hour. Obviously that bothers me as a business who follows those rules throughout.”

For a business that usually sells drinks until about 1:45 a.m., Nasser said the cutoff time is a major blow.

“They keep moving the goal line as to what is normal and we have to keep adapting, and it’s not easy because you end up working five times harder to end up making 30% of your normal business,” Nasser said. “As it were right now, it’s a barely sustainable model for the Backyard Ale House.”

The owners of a couple of smaller downtown restaurants say the new state certification probably won’t have much impact on what they’re doing.

At Paradise Soulfood & Sweets, owner Asia Custus said she will probably fill out the necessary paperwork, but the business at 350 Adams Ave. can’t accommodate a crowd in any case.

“I’m just a tiny, little spot,” Custus said. “It doesn’t really affect me because I only have three tables and I try to keep two tables outside. Because I’m so little, I don’t want a lot of people inside, if you know what I’m saying.”

Right now, the eatery is focused on its outdoor dining and takeout business, she said.

She is not sure what will happen when the weather turns colder and outdoor dining becomes an impossibility. It’s all a little confusing, she said.

“I just feel like this pandemic hit everybody by surprise,” Custus said. “Nobody was ready for it, and we’re just doing the best we can with the hand we were dealt.”

As he prepared to open for lunch Wednesday at the Garden, 116 N. Washington Ave., co-owner Akram Ali said he has not offered indoor dining since March and has no immediate plans to change that. The restaurant, which specializes in Mediterranean food, opened an outdoor dining area in June.

Members of his family, including his wife and business co-owner Jomarie Yamin Ali, have medical issues that put them at greater risk from COVID-19, and many people don’t seem to take the pandemic seriously, he said. He has had customers give the restaurant bad reviews because they are required to wear masks.

Jimmy McGrath, who together with his brother, Joe McGrath, owns McGrath’s Pub in Dalton, said Monday they were still weighing their options and had yet to sign the self-certification allowing them to expand indoor capacity to 50%. McGrath’s established an outdoor dining area this summer to adapt to the pandemic and state restrictions.

“Everybody’s got bills to pay and mortgages to pay, so we’ve got to weigh our options and see where to go because once the weather gets colder I’m probably going to have to move up to 50% (indoor),” Jimmy McGrath said. He hopes restaurants and bars that do self-certify and comply with state restrictions will soon be permitted to boost indoor capacity to 75%.

The newly imposed 11 p.m. curfew on drink’s “doesn’t hurt us,” Jimmy McGrath said, noting that’s around when they’ve been closing anyway. But he would like to see the state end its prohibition on bar seating.

“Bar seating is huge,” he said. “Eighty percent of my people that come in here really want to sit at the bar. That would be nice.”

The state House on Wednesday approved legislation the would allow people to be served drinks at bars and end a requirement that customers buy food when they purchase alcohol. The bill would also permit taverns and restaurants to operate at 50% capacity, or more if they can meet state and federal social distancing standards or erect appropriate barriers, among other features.

The state Senate overwhelmingly approved the proposal Tuesday. State House lawmakers voted 145 to 56 in favor of the bill, with all House Republicans voting “yes.” Wolf has said he will veto the legislation.

THE ASSOCIATED PRESS contributed to this report.