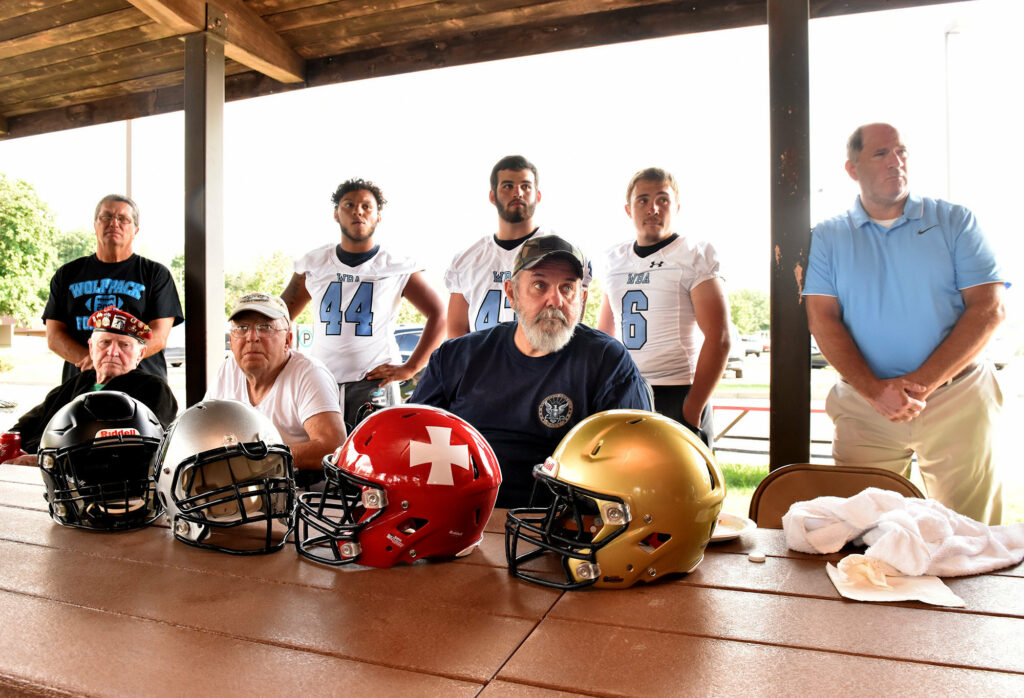 Three Wolfpack gridders represented the district in kicking off the Helmets for Vets program at a cookout held for vets at the Department of Veterans Affairs Medical Center in Plains Twp. Several dozen veterans were on hand.

The school district, the medical center and the nonprofit NEPA Labor Day Festival Committee will sell tickets this fall for an opportunity to win a football helmet. All proceeds will go toward programs and services for military veterans.

The helmets hold special meaning. One each came from the locker rooms of Coughlin, GAR and Meyers high schools. The fourth is a new head gear that will be signed by members of the Wilkes-Barre Area Wolfpack. Sports teams in Wilkes-Barre Area have been merged as part of a reorganization that includes construction of a new high school.

Joe Padavan, president of the Greater Wilkes-Barre Labor Council, said tickets, at $1 each, will be sold by local unions, at the Labor Day festival at Kirby Park and at Wolfpack home games. The drawing for the helmets will be held Oct. 18, the final home game vs. Williamsport. Fans can indicate their preference for the helmet they hope to win.

The Labor Day Festival is intended to recognize and celebrate the meaning of Labor Day.

On Sept. 28, the labor council and the NEPA Building trades Council will hold a dinner to celebrate the 125th and 120th anniversaries, respectively, of the two organizations. Special recognition will go to the late Congressman John J. Casey, one of the founders of the labor council.