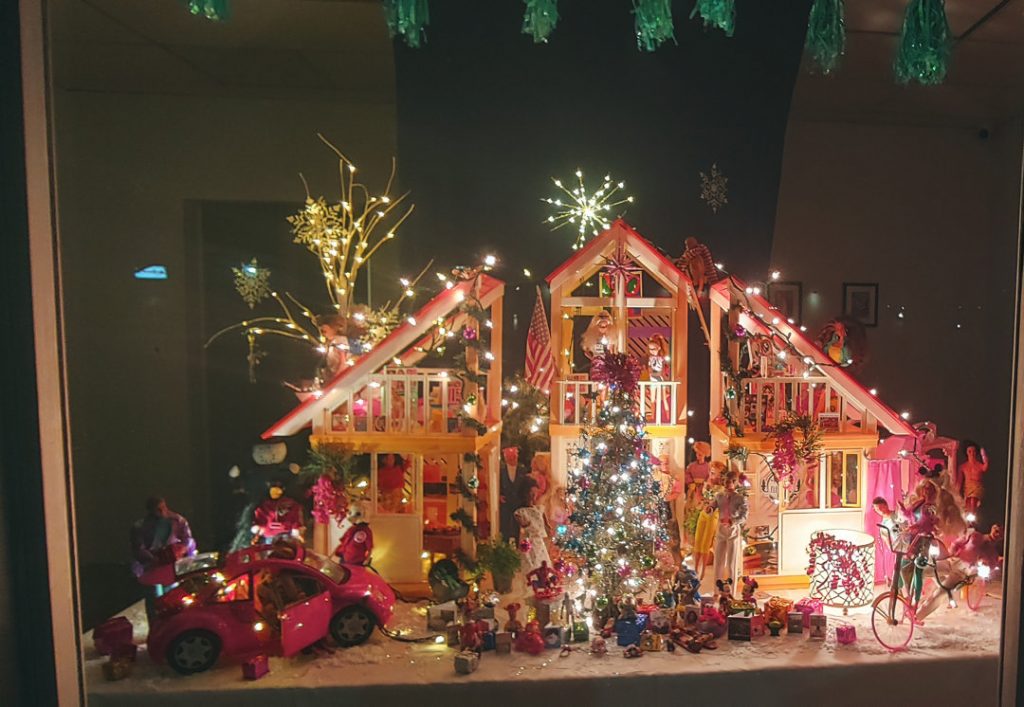 A local family got a little help celebrating the holidays this year from a classic toy.

The group — Frances, Linda and Maura Heidig; Theresa Heidig Rooney; and Julia Bear — crafted a seasonal window display at 413 S. Washington Ave., Scranton, out of vintage and present-day Barbies. The lighted display features a Barbie house and car along with numerous dolls celebrating in different ways, centered around a mini Christmas tree.

“It was so much fun to make,” Rooney said in an email. “It brought us back to the old Globe Store window displays with all of the interesting details.”

The window, situated between Great Temptations Bakery and Sharon’s Place, is easy and safe to view during the pandemic, Rooney added. Visitors can stop by every day at any time.

“The lights are always on, and there is a mail slot for letters to Santa,” she said.

The idea for the display came to the family after Rooney’s niece, Julia, celebrated her 10th birthday in November. Rooney’s other sister, Linda Heidig, saw an ad for someone selling a Barbie collection that included about 30 vintage dolls along with a Barbie DreamHouse, clothing and accessories, and they bought it as a gift for Julia. Then they set out to display it all for her.

“We set the whole thing up while we were together for the weekend at our house at Lake Wallenpaupack,” Rooney said. “It was so much fun creating stories and vignettes with all the pieces to be unveiled when Julia arrived. We all felt like kids again.”

The gift was particularly special for Julia’s mom and Rooney’s other sister, Maura Heidig, who had always wanted a DreamHouse as a kid but never got one, Rooney said. And the boys of the family joined the fun, too. Julia’s 5-year-old brother, Leo, and Rooney’s teenage son, Jack, “got caught up in making up stories about what may be going on in each themed room,” Rooney said.

SUBMITTED PHOTO
Barbie rides into 2021 in the Heidig’s window display.

The amount of toys left Maura Heidig wondering if she’d have room for it all at home, and that gave the sisters the idea to display the Barbie scene on South Washington Avenue in an unoccupied space their mother, Scranton resident Frances Heidig, owns. It has a large window Rooney noted would be perfect for showing off the vintage toys.

Julia took about half of the items home, leaving the rest for the display, and also loaned her family some of her more current Barbie dolls to use.

“We also raided my mother’s attic, where we found our own childhood Barbies, along with my mother’s vintage 1966 Francie, our 1960 Petteena Poodle doll, Elizabeth Taylor collectable Barbie, KISS dolls from the 1970s and our collection of ‘Wizard of Oz’ dolls,” Rooney said.

They crafted scenes in and around the DreamHouse with the various dolls, showing them celebrating the holidays, kids attending virtual school and Barbie enjoying a bubble bath, along with a scene from “The Wizard of Oz,” an ice-skating pond and more. They also added some local touches, such as an Electric City sign and references to “The Office” and “The Haunting.”

“People who have seen it say that we should do a seek-and-find contest,” Rooney said.

While they won’t be sending replies to the letters to Santa, they are gathering “wishes” and answers to “What are you thankful for this year?” They hope to post those responses on the windows by the display, which also include parody songs they wrote to two Christmas tunes, “Winter Wonderland” and “Let It Snow.” 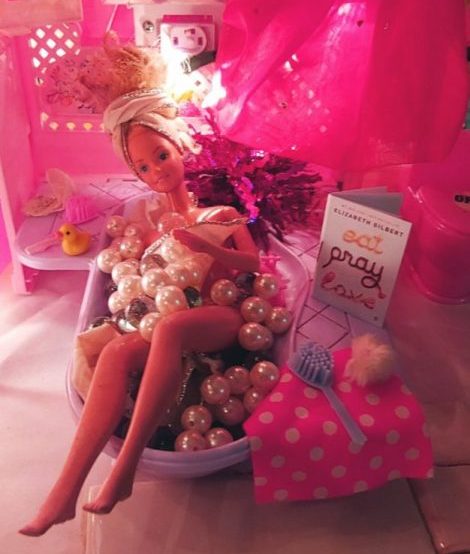 SUBMITTED PHOTO
Barbie takes a bubble bath in a scene from the Heidig family’s window display.

Rooney and her sisters all grew up in Scranton and attended Central High School but have since moved out of the area. Rooney, Maura Heidig and their families live in the Philadelphia area, while Linda Heidig moved to New Mexico.

“We had so much fun creating this (display) and wanted to share (it) with others to bring some joy and light to these difficult times,” Rooney said.