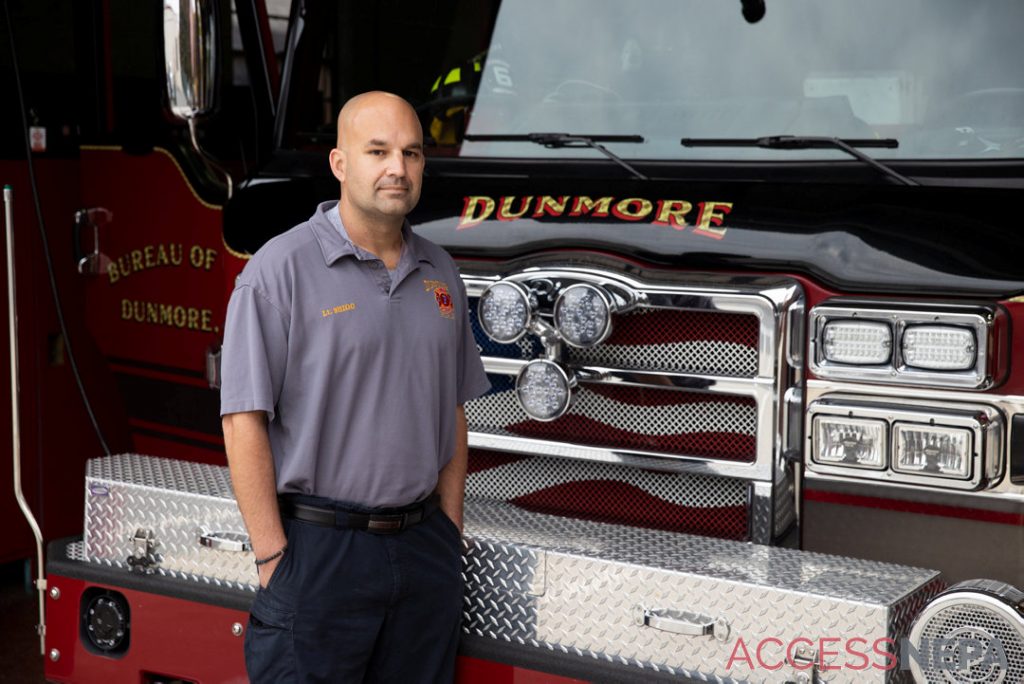 DUNMORE — The firefighter crawled through thick smoke filling a third-floor apartment, searching for trapped victims, when he heard a cough.

Lt. Eric Shigo felt his way in the blackness and found a little girl, overcome from smoke.

“It was that hopeless feeling of, oh no, this is actually for real, and that’s when it hit home,” he said. “I picked her up, cradled her in my arms and turned around in the direction I came.”

He got her out the door, but flames licked up an exterior staircase. He unzipped his firefighter coat and tucked the girl in as best he could to shield her from fire. Racing down the steps, he handed her off to another firefighter.

Shigo headed back upstairs to search for others. Back in the smoke-filled apartment, he found a woman. As he reached for her arm, he felt a baby under her. But he was disoriented and unsure of the way out, so he radioed for help.

The heat worsened. He knew anyone not wearing protective gear could not survive. He found his way out with the infant boy and handed him off to others. By that time, the fire was too intense and there was no going back inside.

Shigo was honored for his heroism Thursday with the nonprofit Burn Prevention Network’s “Spirit of Courage” award. A virtual ceremony of the Valley Preferred Spirit of Courage Awards Show aired on wfmz.com.

Shigo and three other firefighters were dispatched around 11:45 p.m. to a “working structure fire with possible entrapment” at 610 Third St.

“It was one of those things when your heart sinks any time that you hear that (entrapment),” said Shigo, a firefighter for 25 years, the past 17 in Dunmore.

He hoped everyone had already gotten out by the time he and other firefighters arrived. Instead, he encountered a fire ravaging the second floor, trapping the family a floor above.

Years of firefighting training and experience brought Shigo, a father of two young boys, Brayden, 12, and Stephen, 6, to this moment.

Shigo, 41, grew up in Olyphant, where at 17 he became a junior firefighter. Over the years, he worked his way up from part-time to full-time firefighter and became an instructor for the Pennsylvania State Fire Academy.

‘Find my way out’

Familiar with the layout of the three-story apartment building from prior calls for medical assistance, Shigo knew the only entry to upper floors was an exterior wooden staircase.

Upon arrival, the fire was blowing out a second-floor door and spreading onto a porch. He ran up the stairs and thought a crew member was behind him.

But Shigo didn’t know that on the other side of the building, Darkell Sessions was hanging out of a third-story window. A police officer on scene alerted the other firefighter, but Sessions fell from the window before crews could reach him with a ladder. On the ground, the father said, “My babies are in there.”

Meanwhile, Shigo searched the third-floor apartment. He felt his way along a wall, calling out “fire department” but got no response. As he turned a corner, still following the wall, he heard some coughing.

“That’s when I found the 3-year-old” girl, Shigo said.

He knew he entered on tile that transitioned to carpeting. To find the way out, he felt for tile to find the door.

After handing the girl to another firefighter outside, he went back upstairs and inside.

He could also feel the heat through his gear.

“If I’m feeling that heat, anyone not protected would have a slim chance of survival,” he said. “So I knew time was definitely of the essence.”

Now carrying the boy, Shigo couldn’t find his way out. He radioed he had multiple victims, but he “got turned around” inside and needed help. Another firefighter issued a mayday alert, a warning that Shigo was in mortal danger.

A day or two after the incident, the responding firefighters, police, dispatchers and EMS personnel gathered at the Dunmore Community Center to review the incident, Shigo said.

In evaluating the department’s response, Shigo listened to the 911 call from Ebony Thompson, saying her house was on fire and she couldn’t get out.

“And when I heard a baby crying in the background (during the 911 call), that’s when it really affected me. It was very hard to deal with,” Shigo said.

He talked with a therapist to cope with all of it.

“Any type of fatality was tough to deal with, knowing that there was a large loss of life, knowing I made a decision to take a child and not the mother, playing Monday-morning quarterback — all of that was playing on me,” Shigo said. “I had nightmares, and all the second thoughts and second guesses, what could I have done differently. I was eating myself alive.”

“Years ago, responders thought they were untouchable and didn’t want to talk to anyone, DeNaples said. “At the end of the day, a firefighter, a police officer, EMS, is a human being.”

Shigo has been humbled by the award and outpouring of support from family, friends and fellow firefighters and emergency responders, both locally and throughout the state.

“It’s just something we all wish had a different outcome,” Shigo said.